Continuing the discussion from Email notification on new topic for "tracked" category:

I don’t seem to be the only one who just can’t get used to (in the sense of still having to think twice which is which) the terms “watching” and “tracking”. So I’m making this daring move to suggest that there might be better ways of naming these functions.

Although I am not a native English speaker, I am pretty sure that there is nothing in “watching” that makes it a more intense activity than “tracking”. Indeed, my personal semantics suggest that tracking is more intense than watching ("I watch my daughter play by the pond, but I don’t track every step of her as long as she doesn’t get too close to the water’).

Another problem with these termd is that - I believe - they are not commonly used for similar functions in other software.

Personally, I would find “subscribing” much more intuitive for what “watching” currently does. I think “subscribing” is so clear that it almost doesn’t matter what the tracking function is called, because it would be obvious by implication that it is something less intense than subscribing. So I will refrain from suggesting an alternative to tracking.

The only downside I can see with “subscribing” is that it might be too strong in the sense that it might me read as “having something sent home by email”. But then again, that will even be true if the user is not online.

Having said that, I’m sure the team has chosen watching and tracking for good reasons so I’m curious what aspects I might be ignoring here…

I’m putting together more complete thoughts on this subject… It’s been on my mind for a while too.

I agree the current terminology isn’t particularly clear. I feel “Subscribing” is probably more suitable, but still not completely clear.

Facebook opts for a very explicit “Turn on notifications for this post” - there’s no possibility for confusion there! 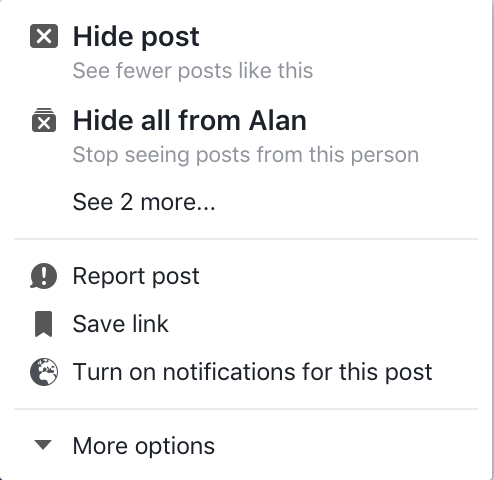 Twitter opts for something very similar: “Turn on mobile notifications”

Alongside the wording, I think it’s worth considering how the ideas of “watching” and “tracking” have changed with the recent introduction of push notifications (whether through discourse-push-notifications, the mobile apps, or some other method).

The Slack notification preferences are another useful reference: 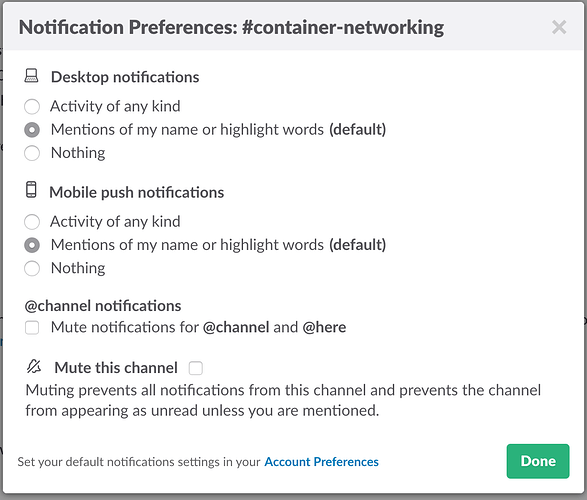 I’d perhaps start the other way around: the first question is what kind of events should trigger some sort of notification for the user (and to keep things simple, I’d say the subscription/tracking setting should be about the answer to this question, like it is today). Let’s call this notification level.

The next question (the answer to which could then be reflected in another setting) would then be how these notifications should be delivered, i.e. web-UI only or also push and/or mail. Let’s call this notification channels.

I am pretty sure that there is nothing in “watching” that makes it a more intense activity than “tracking”. Indeed, my personal semantics suggest that tracking is more intense than watching ("I watch my daughter play by the pond, but I don’t track every step of her as long as she doesn’t get too close to the water’).

Sorry, but this is just plain wrong.

You misuse the primary and common meaning of ‘tracking’. Then choose an inappropriate attribute to compare it with ‘watching’.

The difference is primarily in observation and secondarily in proximity. Tracking is following a trail to find something because you cannot see it. Watched means visible, I.e. direct, observation which implies closer proximity.

Sorry, but this is just plain wrong

I am not convinced. If you want to show that tracking cannot be used to denote a more intense activity than watching or the watching generally denotes a more intense activity, you would have to provide some evidence (or at least examples) to illustrate that point. And even if watching can be more intense, the question would remain if people commonly understand it that way (as both tracking and watching have multiple meanings). In other words, there is nothing in “watching” that makes it necessarily more intense, even if it can be used that way.

And, to return to the topic here, my argument is that if there are words that convey the difference between the two notification functions in a less ambiguous way than “watching” and “tracking”, why not use them?

I’d say that the onus is on you to prove your individual/peculiar position - check out some online dictionaries and grammars.

Your own example shows the logical fallacy of your approach:

my personal semantics suggest that tracking is more intense than watching ("I watch my daughter play by the pond, but I don’t track every step of her as long as she doesn’t get too close to the water’)

check out some online dictionaries and grammars.

I think the point is that the terms are interpreted differently by different people. Regardless of the word’s official definition, the user experience comes down to how people interpret the words at first glance.

The very fact that we’re having this discussion reinforces the ambiguity of the terms.

My feelings on this subject in a previous discussion

I don’t know. Maybe it has more to do with how much and what meaning one imparts to certain words. To me, “tracking” is a bit more removed than “watching”. That is, if I am tracking (my mind goes to “as in hunting, stalking”) something I may be following it at a distance. I’m interested, and I do hope to catch up to it, but I may not be “on top of it” If I’m watching something, it means I’m right there up close enough to see it at the moment. In any case, I’m not so sure it is the “words” …

I’m putting together more complete thoughts on this subject.

I tacked these on to the earlier topic that @Mittineague shared, since @DeanMarkTaylor had already illustrated something there that was very close to where I was headed in my thinking:

I was starting to write up a new topic on this subject, but your suggestion is so close to what I am thinking of, that it seems better to just pick up where you left off. A small tweak to suggest is just to also remove the Mute option. I fail to see why it’s necessary at the topic level. When you’re not watching a topic, you only get notified when you’re quoted or mentioned anyway. This way, it’s a single click to Follow or Unfollow a topic. Not only is the interaction much simpler, but I am…

Though the words themselves are pretty much set, there is also the descriptions.
IMHO the descriptions for the Preference Settings should not be more than a sentence in length.
But that doesn’t mean they can’t be improved in some way.

If you have any suggestions on how they might be improved I think the other topic that I linked to would be the place.

Other ideas might be a more lengthy description in some kind of helpful tooltip thingy or maybe rewording the FAQ that could be linked to.

I like to think I have a fairly good understanding of how the different settings combine with each other and how they afffect things. But I have yet to be able to put together anything that was clear and concise. All the “if this and this, then this, but if this and that, then this” were more confusing to read then simply just knowing.
My attempts at wordsmithing something a non-techy newbie could grasp failed miserably but that doesn’t mean others would also fail.
My current feeling is that maybe a matrix table or flow charts would be the best way to present the information.

My current feeling is that maybe a matrix table or flow charts would be the best way to present the information.

And herein lies the problem (in my opinion). We can sit around and argue forever over words, descriptions, layout, and more. The main issue is that new users coming to sites have difficulty understanding notification settings, and we (site staff) don’t have a clear, concise, simple way to explain it.

For the record, I don’t see systemic confusion over notification levels, across the hundreds of site we host and support.

Not that it can’t be improved, but “the sky is falling” isn’t so.

“the sky is falling”

I don’t believe the sky is falling, nor was it my intention to imply as much.

For the record, I don’t see systemic confusion over notification levels, across the hundreds of site we host and support.

While I don’t have a similar size of data, I have now moderated (or admin’d) 4 different Discourse sites, all with very different purposes (gaming, knowledge-base, internal site, ticket system). For most users (likely ~90%) I never heard anything about notifications levels, positive, neutral, or negative. My guess, (this would be an interesting Data Explorer query), is that those users never touched notification levels, as the defaults were good. (Side note, that speaks volumes to the defaults the team has chosen). Where the issue lies in when users start asking about notification levels, and request enough detail that we start to deal with the overlap of settings and such. This back and forth is a good example of the types of discussions I’ve had on my different sites, as well as offline when leading a training session.

I think it’s pretty conceptually simple to map the notification levels to:

I fail to see what’s difficult about that. ZERO and MAXIMUM are kind of self explanatory. So the only subtletly would be watch vs track, which boils down to:

Notify me for every single reply, regardless of whether it was a reply to me

and again… not hard to grok.

Looks simple, but the problem is that it’s not clear what counts as a notification:

It says what tracking means right there
A count of new posts will appear next to the topic.

So the new post count counts as a notification? Because at the end of a tracked topic it also says

I fail to see what’s difficult about that.

The difficulty is just like I shared above - that explanation is fine for most. The issue occurs when users want details.

Your list leaves out watching first post. As there is already a topic just for that, I’ll skip that hear. My thoughts (and confusion as to what the notification level after the initial notification is) are there.

Well, read the words next to each level. They explain it.

I think the only people this “trips up” are people who want to… argue about the meaning of words.

Can we at least clear up the use of “notification”? Does notification refer to things in the user menu, which also result in emails (excluding likes and badges) only, or does it also describe the unread count icons?

The description of tracked on the preferences page, and the notification selector on a topic do not match the helper text in the topic footer.