This is beautiful. Is there a reason you chose to confine it to one category?

I love the idea of our users creating beautiful and appealing pages wherever they want by clicking a toggle, or something like that. It would be perfect for things like new project proposals, events, announcements, newsletters (by auto subscribing users to a category), or featured projects.

This should be possible when tag support is added

There was no specific reason to limit it to categories (you can have multiple as noted in the theme setting by the way). It made sense at the time from an organizational standpoint, but I can see how having more granular control through a tag might make sense for some communities.

Definitely following. Being able to add a rich visual experience, without losing the ‘to business’ functionality of a Discourse forum will greatly improve our user engagement.

Adding a tag to a post to set it to blog mode seems like a logical and simple way to go.

hi I met some problems, that our blog categaory is not blog-116 but blog/116, so I cannot apply this theme to my forum.
How should i set this set problem?
and this my forum link:https://www.agora.io/cn/community/forum/c/blog/116 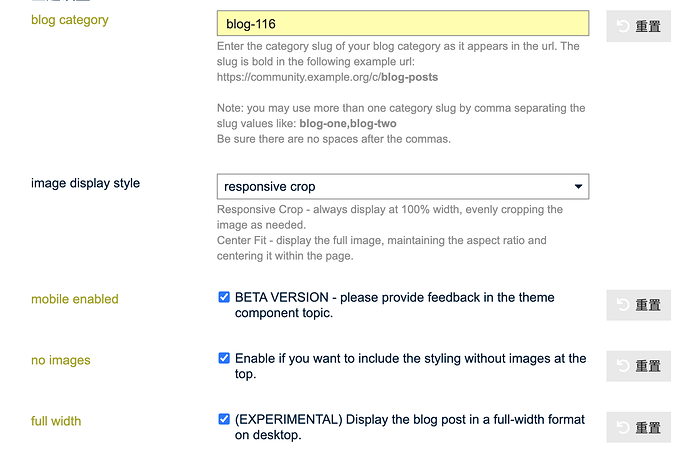 Have you tried just blog yet? That should work.

We have a much better way of defining categories now in theme settings. I’ll get the setting updated at some point. Unfortunately, switching to the new method will disable the component until the setting is re-adjusted. I will make sure to warn everyone here when that change is coming.

That is strange. I just checked my test site and the component is working fine using the slug name. I wonder if it has to do with your subfolder setup. I haven’t ever tested the component in that environment.

Do you see any errors in your browser’s javascript console when you try to visit a topic in the category? You would want to check after setting the blog category theme setting to blog. And are you certain you have added the component to your main theme? 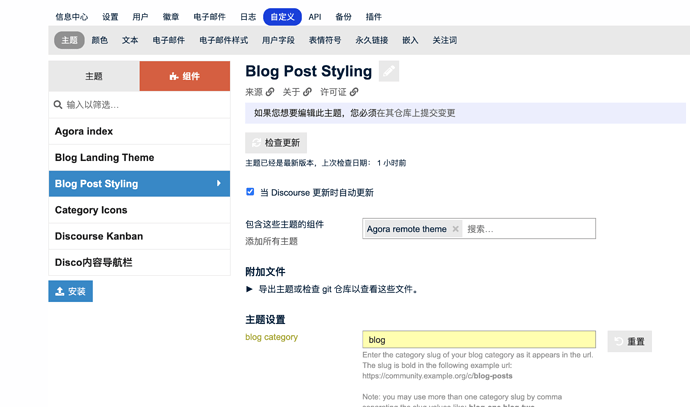 Does it work correctly if you set the slug to blog? When I dropped the /116 off the URL, it does take me to blog/116.

hi I just set the blog category to use list categories, but it shows in every categories, have I did some wrong set step? [image]

Thank you for this lovely component! I love it.

I was just wondering if the tag component has been added yet?

Hey! It has not, but I will bump it up in my priorities. I’ll make sure it gets added in the next couple weeks. I may even have a little time tomorrow next week

EDIT: I have tags working now on my local computer, but have found a few unrelated things I’d like to address before pushing the changes. Thanks for your patience

You likely already found out a long ago, but it is extremely likely this one: Topic List Thumbnails Theme Component

I was just wondering if it would be at all possible to change this somehow to use a specific tag instead of a particular category?

Looking for the same here. We post from our blog in all categories and we can’t allow a category in order to display posts with blog style.

Please let me know if you notice any issues after updating the component.

Small note - tags you use for blog posts must be visible to all users (not hidden through tag groups). You can alway hide the tag with CSS if absolutely necessary.

On updating on the hosted instance with the default theme the following errors are popping up:

Doesn’t seem to have broken previous functionality though

Edit add: This went away after I added a tag, now the blog post styling is working but the image is not appearing, I earlier thought this was an issue with private tag groups, but doesn’t seem to be the case.

On updating on the hosted instance with the default theme the following errors are popping up:

This is an odd bug in core we’ve been meaning to look into. For some reason there seems to an issue where it’s expecting a - instead of an _ in the variable name. The workaround at the moment is to make an adjustment to the theme settings as you figured out.

the blog post styling is working but the image is not appearing, I earlier thought this was an issue with private tag groups, but doesn’t seem to be the case.

Thanks for reporting this! There was a flaw in the logic that was preventing the tags from being fully evaluated. It should be fixed if you update again.

Wow, that’s a very cool toy i’m going to spend today playing with. Thank you for your great work

I spotted a bug where, if I use either the category or tag based system,
If within a <div align="center"></div> tag there are uploaded images (not hotlinks, hotlinks work) then they are rendered in the preview but not after posting, sometimes they appear for a couple of seconds after posting but disappear soon after

That’s an interesting edge case! It should be fixed with:

FIX: ensure only the first image is hidden

In rare cases, the CSS rule that hid the first image of a blog post was not spec…ific enough and would hide additional images.

Let me know if you happen to notice any issues after updating.

Works, thanks a ton! Wishing you a great time!