"Body seems unclear" error when users are typing in chinese

It seems that Discourse has some trouble dealing with Chinese characters. Our users cannot submit topics/posts if they use in chinese? In this case, I can see that it’s a long message but we still get the “Body seems unclear” message. 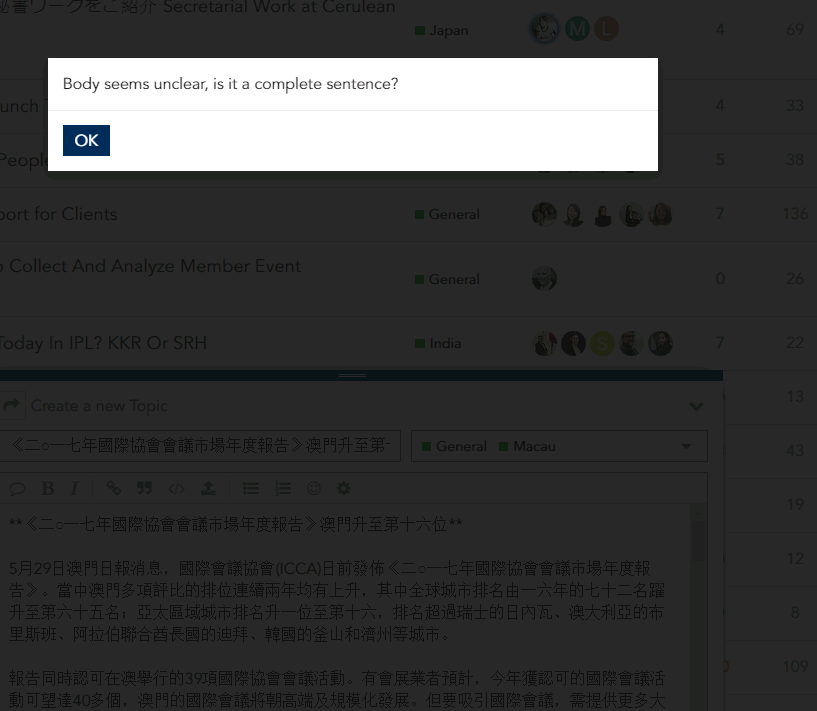 I see what is happening here.

We automatically disable this on Chinese forums but your forum appears to be English with a Chinese category.

Did i miss something?

Following up on this issue. I’m running some test with the latest version of discourse.

When trying to create a topic with the body below I get the “Body unclear” error:

Is there a quick work around on this? My Chinese users are getting nervous because of this issue.

I’ve clarified this issue. But newbie is only able to put single picture on a post. So just a evidence and conclusion. 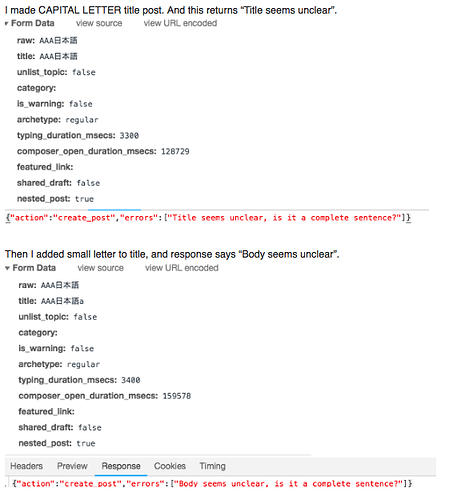 Conclusion, for both title and body

Sorry for reviving this, but we have hit the same issue on our Forum which is primarily in English, but some sections in other scripts. Setting body min entropy to 0 did not fix this.

The issue seems to be that the use of some latin characters trips the all caps check. Here’s an example of a message that bumps into the Body seems unclear notice:

Is the allow uppercase posts the only solution here? On forums like ours where English is the main language, enabling that is not ideal, but I can also understand the frustration of users entering a valid message in their script bumping into that error. Could checking the ratio of CAPS versus the size of the body help here?

Could checking the ratio of CAPS versus the size of the body help here?

That is what it does and in you example the ratio is 100%.

When a forum default language is set to Chinese we tweak those settings automatically, but if you have mixed languages in a single instance you need to tweak that setting.

If the text has a single letter character that has no upper/lower case variant (like with Chinese), then the text is automatically not all uppercase. This could be checked by matching against /\p{Lo}/ in here.

This approach would not require a special setting tweak for forums primarily in zh//ko/ja and can also play well with forums where mixed languages are used, only enforcing the allow upper case where only uppercase-able characters are used.

Maybe a similar logic could also be used to optimize the existing check for all caps: if the text matches /\p{Ll}/ (lowercase letter that has an uppercase variant), then the text is not all caps.

This could be checked by matching against /\p{Lo}/ in here.

Sounds like a good idea for a pull request!

My Ruby chops are nearly non existent, but I can try to put something together as it is somewhat contained.

With that said, I’m seeing a TODO at the top of that file which seems related with this precise line of code. Is it as simple as remove the require, or should someone that knows what they are doing go for this PR?