I think Discorse works mostly in single core, right? So you have to prefer single core over multi-core, no? Because for example on vultr I have the possibility to choose, for example, between these two options (it changes by 8 dollars but I want to understand if in the end despite the cpu less, it really changes due to the fact of clearly superior performance in single core): 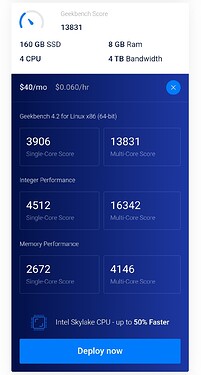 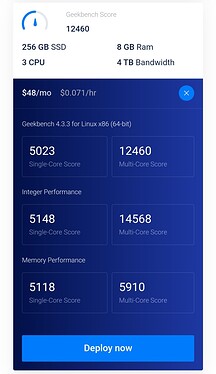 The second one is the High Frequency Compute solution on Vultr. I really want to know if, with 3 cpu instead of 4, but having this optimization of memory and single core (I think I understand this is not it?), it is really more efficient in use for Discourse or not. Thank you very much everyone for the advice you will give me!

Not really, like all websites, there is immediate potential for a lot of concurrent requests.

In my experience, Discourse spreads its load across available cores quite nicely.

A good summary of this is here:

If you doubled or tripled(!) single-core CPU performance, you’d be reducing the page generation component of site load time by about the inverse ratio (double CPU -> half the time; triple CPU speed -> third of the time). Note that’s only one component of site load time – there’s still the client-side JS rendering and network latency, which is completely outside your control, as well as database request processing time, which is within your control, but is dominated by the speed of your disks, …

So between the two configurations, will the first be more performing?

This really depends on your use case. I would go for the greater number of cores. You can offload uploads to S3 in any case, so both of your proposals have, frankly, massive amounts of storage (but this depends if you are migrating a big community over with a lot of pre-existing data).

Both of these servers are total overkill if you are starting from scratch, I would recommed a 2 core, 2GB, 60GB server in that case. It is extremely easy to migrate to a more powerful server if you find you are ever hitting performance limits.

The best thing to do is monitor your instance in Production once your userbase has ramped up to see if you are hitting any limits.

There are so many variables involved its almost impossible to give you specific advice.

As Robert told you above, really the need of resources goes from the usage pattern you community will have.

Faster cores will help Discourse to do things quicker which could make it feel snappier but more cores would allow yo to do more things which would allow you to spread more workload and even maybe (a big maybe) serve more people at the same time.

If you really need that kind of configurations (more than a core and 2GB RAM) I recommend you to do some testing first to see which resource you’re the more scarce and with that you take a better decision.