Custom additional info next to user profile within post

Is it possible to have additional info around user name in the post?

Something like Full name but other required field…
That will have priority upon name, location, info… etc… 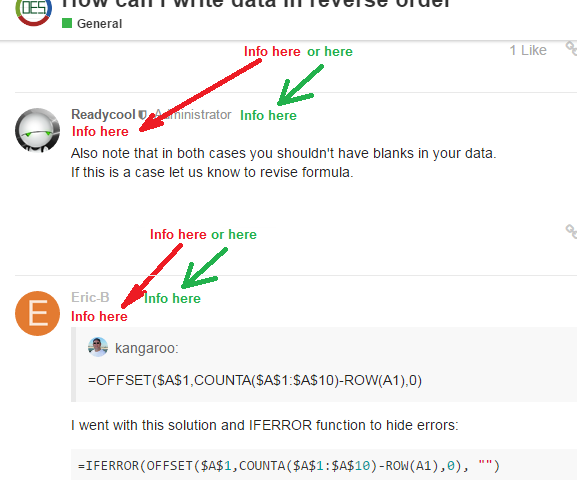 To feed it the data it would need it would require a plugin. Why is Title not enough?

OK. I’ll check about plugin.
I could even use Name field if I could put just some items to select (and if it won’t be overwritten with some social network login).

I’ve tried to play around with tags but find it very complicated to choose each time.

I need it because as a Excel forum I would like to see Excel version of each user so solvers could adopt solution to it (since newer excel version has specific set of formula that older versions doesn’t).
I hope that sounds reasonable.

I’m confused by this:

Excel version of each user

Do you mean that members have expertise in a particular version of Excel?

If so, I think putting them into "primary group"s would let the group title display next to their name

No, I mean users need to have in profile version they are using. XL2007 or XL2016 etc. And solver need to see their version when they answering question.

I don’t see any way this could be easily done short of having the distinction made evident via what category a topic was in, a Tag, the version being part of the topic title, or the member posting the version. eg.

Belong to both, but I think most to the user.

If it’s a car forum and you asking questions about your wheel then, if we see that you driving DeLorean DMC-12, we can skip some questions to determine number of wheel studs.
You can change car.
You can ask for another car.
You can update profile then.

But as long as you have that description then we assume you asking about that particular car / XL version.

than for each question forcing users to state their version, choose category, enter TAG, or have it in title.
If that is an option then I would rather skip all of that and (when necessary) ask user what is his version.
But I hoped simple note could go around this in a start.

At risk of going round in circles, if you are certain that the user and version are connected then assigning users to version Groups should work.

You said, “No”. What are versions related to if not members, topics or posts?

For example, Discourse has different branches. Often a post will have something like “I am running the stable branch” when the distinction needs to be known.
But theoretically members could be put into a “stable” group, that could display next to their name in posts, and the distinction would be apparent on a per post basis.
Similarly separate categories could be created for specific branches, or branch Tags could be used.

Putting this info on the user ( either by groups or user fields ) will make old topics a mess if a user updates (goes from Excel 97 to Excel 2003 ).

Tags are a great candidate for what you want.

Thanks for the tips.
We will discuss Tag scenario once again but we tried it already and it seems complicated (for what we try to achieve).

I’ve put mine name now as Excel 2010…
This is closed what I can set (although it’s predominated when clicking profile picture).

Is this something we could achieve but user can choose “Name” from predefined list?

There are custom profile fields that could work. The value wouldn’t show next to the name in posts, but it could show on the members profile page and in their user card. It would mean a click was needed to see the value but it wouldn’t be buried all that deeply.