But most importantly, when mailing list mode is enabled, there is now a new default option called “Daily updates”.

Enabling “Daily updates” will disable the Activity Summary to avoid redundant overlap of notifications. When enabled, you’ll receive a daily update of all forum activity, except for topics or categories that you have muted. 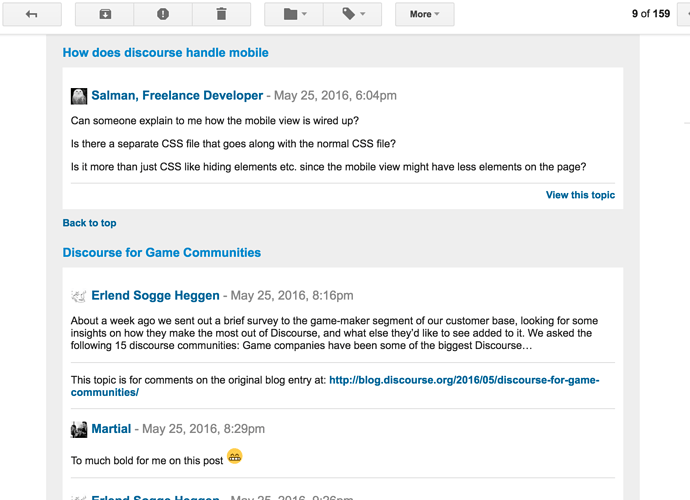 Massive updates, like ours, can be conveniently opened in a new window.

You can test it by turning it on here on Meta for the next few weeks/days. Do note however that we will eventually turn mailing list mode off again, since supporting mailing list behaviour (and the thousands of email sends that go with it) is not a priority for the Meta community.

As our first MOSS collaborator he’s been very patient with us trough our trials & errors while we’ve worked our way towards a smoother process for sponsored collaborations.

I trust this new “default option” will not retroactively apply to people who have already set mailing list mode?

For some of us, the whole purpose of mailing list mode is to have a complete local copy of the forum, and if this new default is set when I upgrade and I don’t immediately notice then there will be a gap (just like the gap caused by the daily email limit).

I trust this new “default option” will not retroactively apply to people who have already set mailing list mode?

It temporarily did, which is a bug that was fixed. For all installations that skipped the broken releases, all should be fine; for all other installs, a few emails will have been daily updates before the fix kicked in.

I’ve been using this here on meta since it was enabled and just wanted to note some observations:

I think I’d personally rather an option to have the “Activity Summary” be sent to me even when I do visit the site.

I’m probably not the target user for this feature, but thought I’d share anyway.

There’s a lot in there… really… and Gmail clips the message because I guess it’s too big?

But you get this, right?

The styling of the avatar, username and timestamp of each post could be toned down.

By “toned down” I guess you mean the font size should be smaller? That I agree with. I don’t see the need for any color adjustments.

The “back to top” links don’t work for me.

Good catch! If it’s hard to fix we could just remove it entirely, although on monster pages like these it does serve a pretty important purpose.

I’m probably not the target user for this feature, but thought I’d share anyway.

It was good feedback!

But yeah, none of us here are the target user for this feature. Basically it’s for non-browser users.

Also, while this feature does scale pretty well, we recommend against mailing list features for communities as large as Meta. It just doesn’t make any sense, since operating at community-scale is what prompted the invention of forums to begin with.

It makes sense that mailing list mode disables activity summary. But as far as I can tell it also prevents individual notifications based on @mentions, replies and watching status. This doesn’t seem like a good idea to me. I’d like to keep on receiving alerts for things that relate to me personally, which allows me to stay on top of my own stuff, as well as get a daily update, to keep eye on the forum as a whole. They’re different kinds of information for me. I’d like to read the former, but only skim the latter.

Could you change this or enable it as an option, if you feel strongly about the issue of duplicating content?

Ditto this. Just noticed I was missing these on a Discourse with mailing list mode daily updates enabled. It makes sense it would stop these emails if mailing list mode “send me an email for every new post” was enabled — because obviously you’re already getting an email of every single post.

But I consider this a bug that daily updates disables the individual @mentions and watching status emails too. It seems like it’s a carry over of being disabled for enabling “send me an email for every new post”

It makes sense that mailing list mode disables activity summary. But as far as I can tell it also prevents individual notifications based on @mentions, replies and watching status. This doesn’t seem like a good idea to me.

Yeah, I think you’re right. @gdpelican could you look into this when you have a moment? Daily updates shouldn’t disrupt individual mentions & watching status.

This should fix that I think!
https://github.com/discourse/discourse/pull/4365

As of 5f67cd7, which is later than the fix, I wasn’t receiving email notifications from watched categories.

What fix? That pull request hasn’t been merged in master yet.

Well, that explains it

Thanks for fixing this!! Ironically I completely missed that people had responded to this thread/fixed this, because I have daily activity summaries on

It is a huge performance hog on large sites leading to daily summary emails containing 100s of images and 100s of posts on active sites.

This manifests itself in a very large increase in Sidekiq memory usage and overall job queue performance impact.

I feel the “Activity Summary” emails @neil created fill a lot of this gap anyway, and we simply can not ship a feature this dangerous.

If we start truncating the email it still is quite expensive and would just lead to confusion anyway.

If being more like mailman, is what we absolutely want here, then for one these daily summaries should be text only (based on markdown) and probably have some sort of sane batch size.

The current feature solves a problem very few have and the way it solves the problem is inconsistent with what “mailman would do”.

I was just about to announce this as the default setting for my small community who are heavy email users and find this very useful and much preferable to receiving individual emails. (But aren’t motivated enough to change it on their own, despite my clear instructions on how to do so.

Daily digests are a feature that mailing lists routinely provide, as does Google Groups. Don’t ditch it!

For the love of all that is fluffy and cute in the universe, provide an admin setting to enable this for users, disabling it by default. Put a big

sign over it on the admin settings screen and explain the trade-offs. But please don’t remove it altogether.

It is going to have to move to a plugin or something, this is not an option I can allow our hosted customers to have as is.

If someone wants to build this, “like mailman would” I am more open to it, it would have significantly less costs and an option I would be open to having.

But styling a gigantic HTML document with 100s of posts and killing peoples mobile data plans is just wrong imo.

Also @alehandrof what is wrong with enabling?

I don’t see how gigantic confusing email is any better than this focused one.

Daily digests are a feature that mailing lists routinely provide, as does Google Groups.

Google groups does a 25 email batch or “daily summary” I am pretty sure that the “daily summary” is abridged. Also totally unclear about what happens with images and styling on these emails.

Mailman send unstyled blobs of text, something that would be significantly cheaper to generate and not blow data plans.

Hmm. The fact that the “Activity Summary” is not be exhaustive would likely be confusing to my users, though without doing user testing that’s just my reckoning. “Some stuff based on a magic algorithm” is harder to explain than “everything”.

I haven’t tried to use the “Activity Summary” in the daily mode. As an admin, I’d prefer a list of everything but I’ll accept that feature that only I need doesn’t need to be in core. A daily list of all new topics, plus a selection of the most popular posts might be workable, but I think the activity summary is too vague to explain/use.

I’ve switched to your suggested setting on my site as well as here to get a feel for it and will let you know. (Though I might just unaccountably disappear, as I’m prepping for our big meatspace meeting in two weeks – when I was hoping to announce the change

I’d be interested what’s the take of other people (such @tobiaseigen, @watchmanmonitor & others I’m forgetting) who use Discourse in a mailing list way. What notifications do they suggest for their users?

I don’t see how gigantic confusing email is any better than this focused one.

It is complete, while the activity summary tends to not include all replies. While this doesn’t make a lot of sense for public communities, this is vital for some kinds of internal communities. In my case, I’m talking about academic use (Discourse for a course at a university) – I want to make sure that by default, all students get sent all discussions in the forum, including any official responses.

Google groups does a 25 email batch or “daily summary” I am pretty sure that the “daily summary” is abridged. Also totally unclear about what happens with images and styling on these emails.

I’d be perfectly happy with sending out a batch every X emails or Y days, whichever comes first. So you could do a batch every 25 emails or 1 week. We sometimes have very quiet weeks and I’d like to keep the emails going even then.

It is complete, while the activity summary tends to not include all replies.

My issue is that the feature , as is, is way too far from done to be included in the released version of Discourse.