I have been waiting for the transifex translations to be updated, but following the latest commits, I think it should work fine, and it is not working properly.

You will see the bookmark instructions by discobot to teach a user how to bookmark some message.

The same instruction on spanish version are at line: 206

But, tested now on try.discourse.org and I saw:

Ps. The interface discobot was set on “es” language selection.

Something wrong in your translation, you lost the URI, see:

It seems that this version is not up-to-date, the strings are old, in fact the string for the bookmark is completely missing.

A quick fix is to upload the original file from github to transifex.

(and don’t forget to fix the URI that you lost)

It seems that this version is not up-to-date

Did you check “es” version?

That version is OK.
I don’t know why translations did not update to github repos

Sorry for dump this.

But, I checked the last commit (22 hours ago) for “Update translations” from @neil and it didn’t have the spanish files for narrative bot.

I’m waiting that upgrade to use the bot in spanish :’(

Please tell me if you need some help to update from trasnsifex to github’s repo.
Really I don’t know how that works, but I can learn.

Translations seem to be there:

I pulled again now, but no new translations were found.

Discourse has only ever supported one: es_ES.

But looking at Transifex, I see all these other translations that aren’t used by Discourse. Translators are doing a lot of work for nothing… 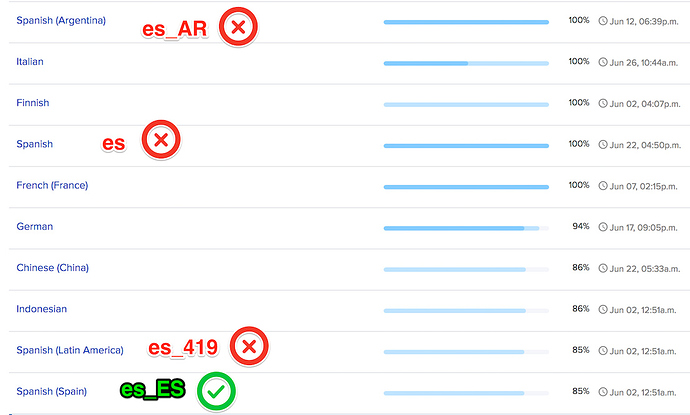 When Transifex integration was being setup, es_ES was the one. I don’t know why it was chosen since it was entirely up to the translators. Since all these other Spanish translations are being maintained, we can take pull requests for them. But the “es” translations are probably useless since we’re already mapping the es_ES ones to es. From what I remember, Rails i18n doesn’t recognize “es_ES”, which is why it had to be mapped to “es”. I’m not sure if es_AR and es_ES will work.

But… at interface preferences, when a user search “pt” (for example), has got two options: pt and pt_BR 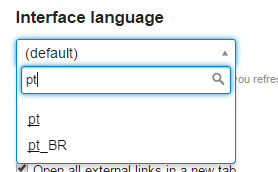 If a spanish user search “es”, did not find es_ES:

That’s reason is why I spent a lot of time translating “es” version at transifex.
Now you said to me that this version is not the correct one. OK, I’ll replace the transifex files from “es” to “es_ES”.

And all happy, IMO, when we finish this, this “es” version should be deleted from transifex.

By the way, @neil can you set me as reviewer for es_ES version at transifex?

I guess we have pt and pt_BR because people submitted pull requests for them. We can accept PR’s for es_AR, etc. too.

Technically, our english locale is en_US, but we map it to en, and we’ve never added translations for en_GB, en_CA, en_AU, en_IN, en_JM, etc…

Thanks for completing the es_ES translations @SidV!

But… at interface preferences, when a user search “pt” (for example), has got two options: pt and pt_BR

pt is Portugal and pt_BR is Brazil. There is no pt_PT, that would be Portugal too.

I tried again in try.discourse.org
Everything it’s

Works fine. Translations are good.
I sent some new corrections to transifex now

We can close this thread
Thanks all for the support!