I’m looking for some advice here. We have an app, available on Google Play and Apple’s App Store, with an embedded Discourse community. It has been like this for several years now and the community itself is strong.

Occasionally, when you submit an app update to Google, they will review it manually and go through your entire app looking for app violations. This now happened to us, specifically about our community features and their user-generated content policy.

Initially, they rejected the app because the community (Discourse) didn’t have these features:

As you can see, this isn’t about our specific community, but more about the features in Discourse itself. I responded to this by showing them a video of how to flag posts and how to mute/ignore users, then I submitted the app again.

They have now again rejected the app, and they have added this issue:

I don’t agree with this, as 99% of the issues in a discussion forum will come from the discussion, so flagging offending posts will handle most of it. But it’s not like I can argue against Google’s policy.

To my knowledge, there is no “button” for reporting a user in Discourse. I plan on sending them a video to show that any user can reach out to our team of moderators and report a user through a private message. I don’t know if they will accept this.

I’m also posting it here to raise a bit of awareness. Google Play has recently been on a mission to revamp their User Generated Content policy, so this might affect other Android apps that use Discourse in some way.

I’ll update this when I get feedback from them.

I think this is a question of clearly explaining the existing flagging functionality in Discourse in detail to the reviewer. I’ve had to do this before for Apple’s reviewers, it’s possible that Google’s reviewers need even more specific screenshots/details included.

Allow users to report/tag other users for potential violations : We’re having trouble with this one, so I appreciate the custom wizard plugin suggestion.

Core certainly provides many options to do this, that’s what flagging is, a way to report violations by users. We don’t let people go to the user’s profile to flag a user, but from posts, they can certainly be flagged.

And once a regular user flags another one, admins/moderators can very easily suspend/block that user globally. You might need to show some of those screenshots to the review, but the features in Discourse for this are quite solid.

All users MUST agree to the terms of service of the app: 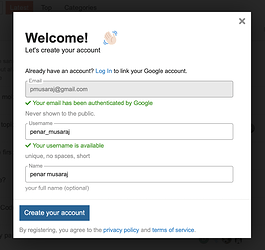 And over the next few months, we will also add the ability for sites to add a consent checkbox that users must check, both when signing up and when logging in (for example, if the policy changes so much that admins need to request a new acceptance by all users).

Today is day 18 of not being able to publish our app.

There’s clearly a communication issue here, as Google seems fine with the functionality, but the outsourced review team do not. In my opinion, Discourse does have the required capabilities and this is coming down to either a language or comprehension issue on the reviewer’s side.

Just a guess, but there might also be a system in place that rewards or punishes the outsourced reviewer for correct or incorrect app reviews, so there might be reluctance on their side to admit that your app is actually compliant. I’ve dealt with them on other apps too where they, for example, insisted for two months that I list the subscription details of an in-app purchase that was just a once-off purchase.

For anyone else running into this, here are the issues mentioned and how we dealt with them:

1. Providing an in-app function that allows users to report/flag other users for potential violations
We have a link in our community that we built using Nav Links Component that links to the Moderator group. I recorded a video where I show how you can tap on this link, then message the moderator group to directly report a user. Google accepted this, as the only requirement is that it be in-app. It doesn’t have to be a “report user” button.

2. Providing an in-app function that allows users to remove/block abusive users
Discourse has a mute/ignore system. Just make sure your site settings allows even new users with trust level 0 to mute/ignore users. I showed them a video of how to tap on a user to open their profile card, then enter into the user’s profile to ignore/mute them. Google accepted this.

3. Providing an in-app function that allows users to report/flag potential violating content
Discourse has its flag functionality for this, and it covers the requirement. It seems like the review team didn’t understand this. What’s funny is that they actually did flag a random post using their test account, and then included a screenshot showing they flagged a post, but still brought this up. I sent them a video showing how to flag posts. Google accepted this.

4. All users MUST accept the app’s terms of user/user policy provided by the developer before app usage
For this one, they sent a screenshot showing the sign in form where they are signing in with their test account. I’m assuming they meant to indicate that users don’t have to agree to the terms on each sign in. Reading the policy requirement, I can interpret it that users only need to accept this when they initially sign up.
As @pmusaraj mentioned, Discourse’s default sign up form already mentions the terms of service and privacy policy. To ensure compliance, we have a mandatory user field that the user must accept when signing in.
I sent them a video showing you that you can’t create an account without ticking the box, and Google accepted it.

5. App’s terms of user/user policy MUST define objectionable content and behaviors
We do already clearly define what acceptable and objectionable content in our community is. We have it in our terms of service and in our FAQ. This is a detailed set of guidelines that our moderators worked together on. I sent them a video of how to access the terms (About - FAQ / Terms of Service) and also sent them direct links to both of those pages. Google accepted this.

Our update was accepted by the review team today, so the above should be sufficient for anyone facing this in the future.