I am a user of community(dot)jenkins(dot)io (sorry can only post 2 links) which according to one of the admins, uses a Discourse instance sponsored by the official discourse group. Meta tag in the header/source says Discourse 2.9.0.beta2

At some between Monday and Wednesday this week (2022-03-14/16), the site no longer loads on legacy Android Firefox browsers. Specifically, Firefox Android 68.11.0. That is also evidently the core for other browsers like Waterfox, Silk browser on FireStick. Never been here before, but it doe snot load either. The page appears to fetch data for a few seconds, then blankness. “Request Desktop site” is also blank. “View Source” spins off to an abyss of nothingness.

I reported this on the Jenkins site and the admin has indicated this is likely, " because replaceAll is not available in Firefox 68." and provided evidence from Saucelabs at about 00:17 sec mark the error message.

Earlier this month a JavaScript change broke StackOverflow functionality (link below) for the second time on the StackOverflow/Exchange sites. They broke and fixed it once before in December and we sincerely hope they can revert that change and restore that functionality.

Interestingly, I fired up a WINXP PC running FF 52.9.0 ESR and notwithstanding the banner “your browser is too old to work in this site”, the site appeared to load fine, so it seems rather specific/esoteric.

I would ask Discourse team review what changes were made and if there is a way to mitigate this breaking change. I recognize nothing can be supported forever, especially when not in the scope of testing, but when it’s reported and if it’s an obvious fix that does not significantly impact operability, consider such. Not looking for all functionality, just some core functionality (at least read content).

We certainly always want to display at least a readonly view on old unsupported browsers. Breaking is rendering and only showing a white page is a bug.

We will have a look at this regression over the next week.

replaceAll is unsupported on iOS <= 13.3 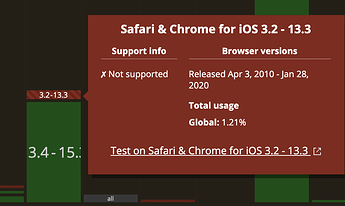 This PR will add detection for this feature, and fall back to the basic HTML view if needed:

We're using replaceAll in a few places. If it's not supported, we should fall ba…ck to the basic-html view.

3 posts were merged into an existing topic: Frontend on Prod Site Down – Ember/Test error

Thanks @Ian_W for the report

We’ve now fixed the issue. This topic will close in a day.

I can report only partial success on legacy Firefox on Android.

On both meta.discourse.org and community.jenkins.io I now see the “browser is too old” banner", same as on the WINXP PC running FF 52.9.0 ESR.

On Jenkins site, I do see the Categories, categories description and “Topics” count, but clicking on any category, I again can’t see any issues. 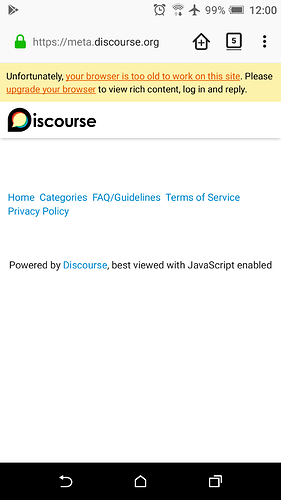 I got meta.discourse.org to render the old HTML version in Firefox 40: 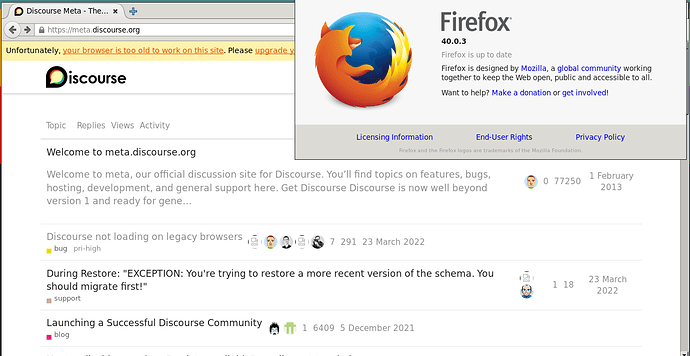 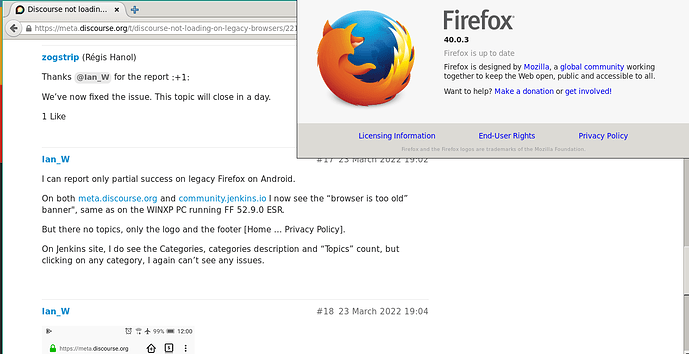 This should happen on all Firefox < 77.

As noted, my screenshot comes from the Android variant. Site seems to work fine on a Desktop variant.

I have no idea how I can extract additional information from the FF Android browser to assist debug.

Just installed the deprecated fennec Firefox 68.9 on my phone, and it appears to be working now: 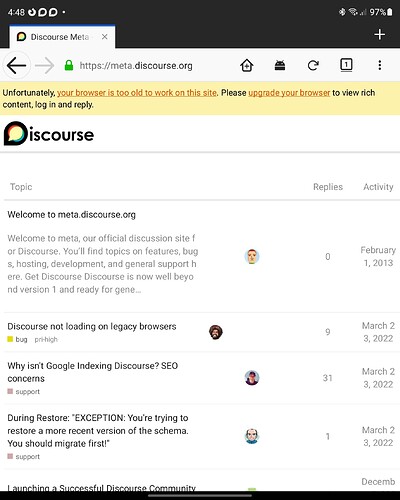 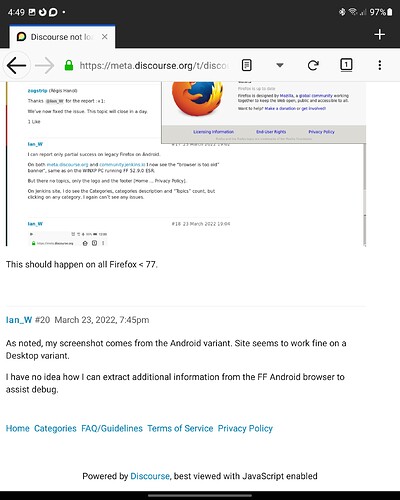 Any ideas what I’m missing while trying to reproduce the bug?

Well, I’m not sure what to say. I just took a factory reset Android phone, (running 7.0 'cos it’s an old phone), downloaded Firefox Android 68.11 APK, installed and navigated to meta(.)discourse(.)org ** and get the prior screenshot.

"Oops! That page doesn’t exist or is private.

But then I get a list of “Popular” and “Recent” topics and can see this very topic.
Clicking on the topic, I new see the topic title, plus “bug”, “pri-high” but no content.

**: 2-link limited post
(also can’t seem to upload screenshots via UI, so had to upload by reply, one at a time) 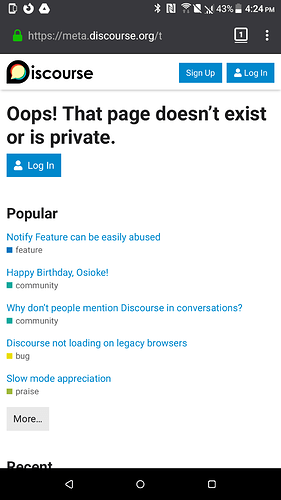 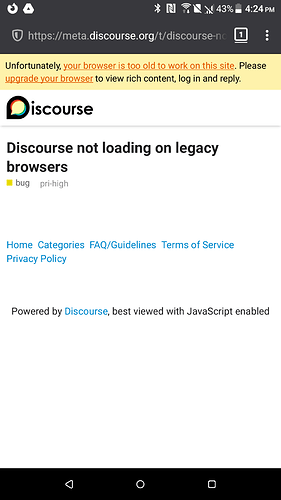 Watching just in case someone comes up with a solution for using discourse on an iPhone 6 before I end up buying a new phone.

I’m having the same issue, as explained below:

Just would like to let everyone know that I have the same issue. I have an iPhone 6S running iOS 12.2, which btw I don’t plan on replacing or updating. I am an active user at https://support.last.fm/ but since a few days ago I just get a blank page on my phone, whatever browser I use. I have the Discourse Hub app which stopped working. Recently, I’m only shown the “browser is too old” banner" as shown below: [IMG_2094] Will this issue be fixed for iOS <13 users? I don’t want to buy a new ph…

For iOS < 13 or deprecated Firefox Fennec on Android, we should be showing the HTML view.

However, we are failing to do that because there is no HTML view due to

which is in our code base since forever.

Including the crawler content so we can fallback to HTML view is expensive, so maybe we want to add old Safari to

so it’s done only when necessary?

The other alternative being telling Babel to transpile replaceAll / finding a good enough polyfill.

The other alternative being telling Babel to transpile replaceAll

Other alternatives I can think of:

3 is something I’m afraid we will have to do eventuality, as the number of mobile devices abandoned by their manufacturers will only increase over time. It will increase some server load filling the template, and enlarge our HTML size on mobile but IMO we should do it.

So I’d say we do 3 and investigate if doing 1 and 2 is feasible.