Currently in our discourse, we’ve added a custom user field for discord account name that users must fill in on registration for reference purposes. That’s also how an Discord/PHPBB plugin worked that provided similar functionality.

It’s not the greatest solution (half our users don’t fill out the # part of their discord name), but it does work.

That’s not really what this topic relates to, the goal here is to keep discourse trust levels synced with discord. It relies on proving you are both users.

What’s to stop someone impersonating another discord user and inheriting their trust level if it’s a free text field?

I think the best solution to be honest would be to map discourse users to discord users not by email or username, but by ID.

We’re essentially trying to accomplish the same functionality, so a similar structure would make sense. Our “tiers” are the trust levels/user groups, and the only issue is that Patreon is a centralized platform while Discourse is not.

Edit: By Discourse not being centralized, I mean the fact that to create a Patreon campaign involves creating an account on Patreon’s site and that’s pretty much it. Everything is done in the one spot. Creating a Discourse community involves actually hosting your own instance of Discourse on your own server (or paying literatecomputing to set it up for you). However this would simply mean that, unlike Patreon, the admin of the community would have to create their own bot account and give their Discourse instance the keys to it.

This also completely eliminates any potential issue with having this be a free text box. You need to actually sign in to both accounts to link them, which is a pretty good way to prove you are both users.

I don’t think anyone who has been following this topic was under the impression that your bot was going to rely on the honor system to identify users. It was a given that the oauth2 flow would be used, because why wouldn’t you? If eliminates both user error and malice, streamlines sign-in and significantly reduces any support overhead.

I’m all for using oauth2 or any other means of eliminating user malice and/or error.

I was just proposing a quick and dirty solution to getting around the discord email look up problem.

The work to achieve that was done months ago by @featheredtoast and if that’s all you need you can install the plugin which @falco linked above.

As to the scope of this topic, building on that link to sync trust levels, if you can’t wait for @sudaraka to finish his work your other option is to post over on #marketplace. Include your proposed budget to see whether another developer would be willing to build this for you sooner. 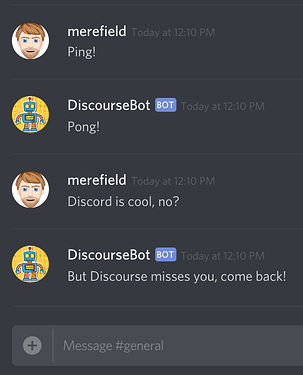