Hi. I need to better understand what this will mean come next June. I haven’t touched IE in many years, but I do have a significant number of users who do use it on older computers, and these are not users in a position to easily change browsers or buy new computers! I need to know what “dropping support” means for those users, who I cannot leave out in the cold! Thanks.

We are still discussing the details of it, and will release our official plan in mid January.

Thanks. There are still many users trapped in IE without recourse, and these are often users with minimal computer skills on old computers that they cannot afford to replace, and who would not be able to easily switch to another browser (which is usually why they’re still on IE now!). Also, these are often users in demographics that are already disenfranchised in other ways, and who depend on their old computers and the forums they use to not be further isolated.

You’re missing the point. These are users who cannot easily switch to and learn new browsers. They would have switched long ago if they could have. I take it you don’t support any special needs users yourself, right? No friends or family with special needs far away stuck on old computers with old browsers and no way to upgrade them?

Many of these users took ages just to get IE configured so that it was minimally readable for them. Even computer literate users can have problems switching to Firefox. Ceasing to have even minimal support for IE is kicking these already disadvantaged users in the teeth, and will not be a PR boost for Discourse when it becomes widely known.

And I’ll add, saying “just switch to Firefox” suggests that you don’t have a clue about what is involved in supporting this category of already disadvantaged users.

Are these users of a forum you’re maintaining, or is this theoretical? Feedback about how we could minimize disruption due to the depreciation is always welcome.

Outside of a few exceptions that are on legacy enterprise systems, within our hosting purview we see about 1% overall IE11 usage.

Discourse as open-source software wouldn’t exist without our hosting side of the business, and what it more or less boils down to is a business decision.

IE usage is also dropping very rapidly among users that rely on screen readers and based on the current trends will be less than 10% by 2020 (WebAIM: Screen Reader User Survey #8 Results).

Discourse set out with the mission to modernize communities on the web. Are we achieving that goal when we hold the majority of users back because 1% can’t/won’t upgrade?

It might be a hard change to make for some users with limited skills, resources, or abilities… but as far as IE goes the change is inevitable. Will this small subset of users be more capable 5 years from now?

Hi. Let me back up a moment and address the general form issue (though I’ll say now that this is not theoretical, I don’t run a large forum myself but I care about the users who are still stuck on IE, who tend to have either low computer literacy, be extremely elderly (but still very active!) or both. When I say elderly, I mean in the 80s, 90s, approaching 100! And they still make great posts and care. I don’t want to kick them out when I know they will never upgrade their systems. There are still people running Windows Me! Windows Vista! You get the drift. Scary from a security standpoint? Definitely. But that’s the reality.

I am always concerned when I see marginalized populations expressed in term of percentages. I’ve criticized various large platforms regarding this kind of issue for many years when it comes to various UI decisions. Those tiny percentages can still represent significant numbers of warm bodies. Will they all be around (or alive?) in 5 years? I dunno. That’s the wrong question, I believe. I’m more concerned about quality of life now.

Obviously, one doesn’t expect all the features of a forum to be available forever to people running old systems and old browsers. However, I would assert that providing continued access to basic functionalities is important (note, for example, how even today Gmail has a greatly simplified “basic HTML mode” available).

Ultimately, I would request that the team think less about the percentages and more about the actual human beings. You can safely assume that anyone still stuck on IE has reasons for being in that position, likely beyond their practical ability to alter at this point. They’re usually already disadvantaged and cut off from most of the world. It is very disturbing to me when I see technical decisions being made that marginalize them as “unimportant” even further.

Thanks very much for your consideration.

I understand where you’re coming from, and appreciate that you’re looking out. We just need to draw a line somewhere unfortunately.

It is possible that we could serve our no-JS/web-crawler view to users on unsupported browsers; at the very least that would grant them the ability to access the community’s content. As mentioned earlier our plans aren’t 100% complete yet, so there are more details to work out.

Thanks very much. Please let me know if my input can be of any use during this process.

Lauren as someone Disabled myself I feel very strongly about your core message. I also have two elderly parents who are still “in the game” with iPhones and a Win10 computer and I spend a lot of time working with them on how text messages and email are not the same thing, etc.

My point is meant to be re-assuring and I hope it comes across that way - in my experience after a long It career, if your “customers” (I am not sure what word to use - community?) are using old versions of IE on old versions of windows, well then they are in effect already suffering under the maximum load of bugs, lack of functionality and features - this Jan change wont affect them at all. They already do not havew the bells and whistles of win10 and IE with Silverlight etc etc and so are, in effect, the MOST prepared for a stoppage of new bells and whistles for IE 11.

(I do not work in any way for Discourse, just a random IT career guy)

I hope that makes you a little more at ease.

I also salute the dev team for not putting up a scary message forcing people to migrate to a new browser, or things along those lines, just quietly focusing on other areas.

Thanks Matt. Much appreciated!

We are still discussing the details of it

Has EdgeHTML been brought up yet? “Microsoft announced plans to rebuild Edge as a Chromium-based browser,” leaving the soon to be outdated version of Microsoft Edge in the dust.

will release our official plan in mid January.

Funnily enough, I just realized that when opening a new tab in IE11, it redirects to this page (not always)… 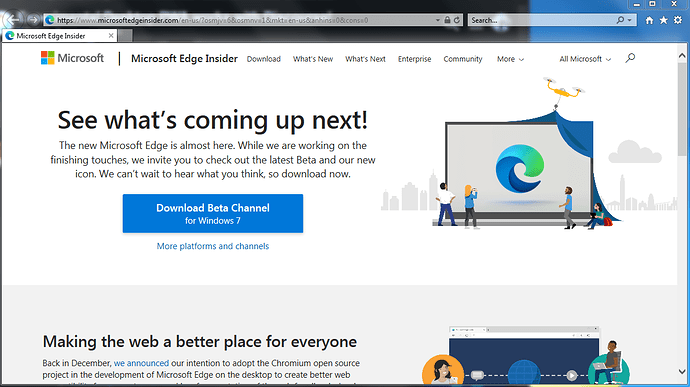 Has EdgeHTML been brought up yet?

I read that Microsoft will be replacing all shortcuts pointing to old edge to new edge, so it’s safe to assume we will be supporting the new edge only as the old one will mostly disappear from everyone desktop.

I read that Microsoft will be replacing all shortcuts pointing to old edge to new edge, so it’s safe to assume we will be supporting the new edge only as the old one will mostly disappear from everyone desktop.

What about the actual application itself? Will it be rolled out VIA Windows Update? If so, is it an optional update? In that case, not everybody would have the new Edge.

With that aside, I’d like to think that the new logo will confuse regular users into thinking that it’s a new Firefox and Google Chrome all rolled into one. Oh, and if you fancy, Internet Explorer.

Edit: I’ve found some pretty interesting information, but I still want to know if the update is required, not to mention the Edge Blocker Toolkit. 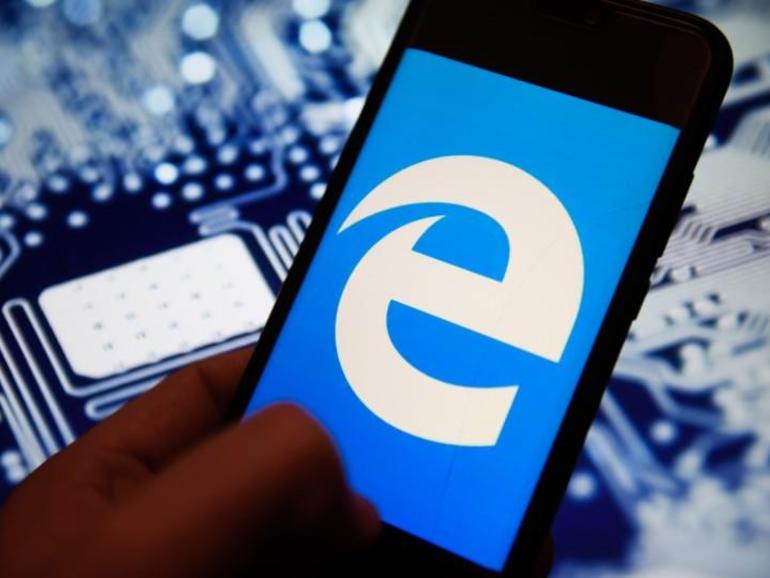 Beginning January 15, 2020, Microsoft will be delivering its new Chromium-based Edge browser automatically to Windows 10 users via Windows Update, unless its Edge Blocker Toolkit is applied. 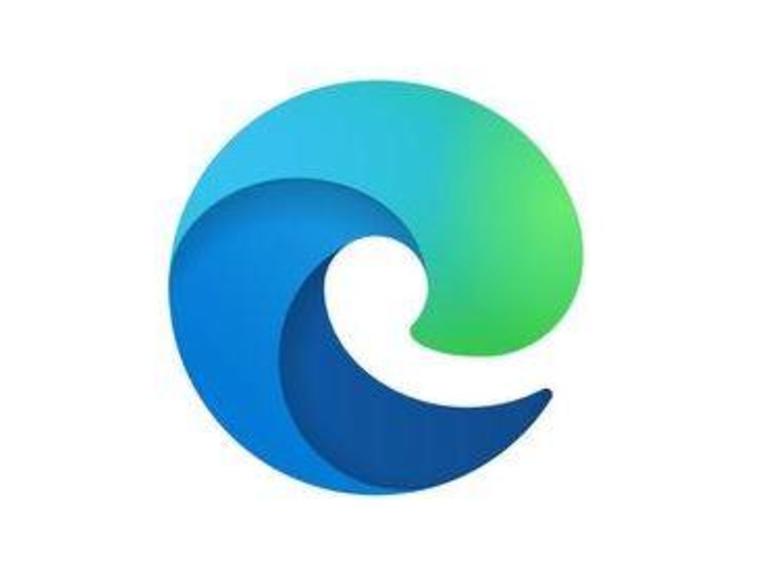 Microsoft gets ready to roll out the new Edge to Windows 10 via Windows Update...

Beginning January 15, 2020, Microsoft will be delivering its new Chromium-based Edge browser to Windows 10 users. Microsoft ultimately plans to distribute it via Windows Update, unless its Edge Blocker Toolkit is applied.

Official announcement is up.