We are sending e-mails to our members and when we have exporting up-to-date user list as .csv file it contains suspended, silenced and suspect users too. We don’t want them in mail list so we have to pick them one by one and delete from list.

To make this easier, there could a option to filter those unwanted users in exported user list. It would help us and probably many other Discourse admins.

Wait can’t you just use an excel macro to clear them off? We do export the status in the CSV right?

I’m using LibreOffice. How can I do it?

I guess it is not available in LibreOffice.

Thank you for your advice, but it is why I’ve asked for this feature. That user list naturally will grow by the time and will make it harder.

We don’t want them in mail list so we have to pick them one by one and delete from list.

In LibreOffice you can filter the data like this: 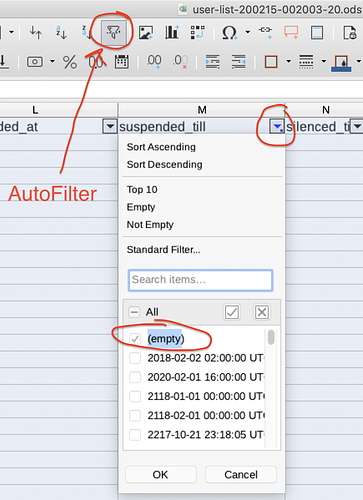 Select empty in the filter dialog box for the suspended_till column and you are left with non-suspended users. Do it for any other column necessary and then export the resulting filtered list for use in your email.

we have to pick them one by one

I understand that you want the feature but, while you are waiting for a feature that may never be developed, you don’t have to do it the hard way. You now have two options to make it easier for you to accomplish this task:

Also, there are more options which might help you:

FYI, I think that this feature will be a very low priority because it is so easy to accomplish the same result with mundane spreadsheeting skills. This feature would only be needed if there were some major difficulty like having a user list that was too long to fit in a worksheet. But the current limit for rows/records is 1,048,576 for both Microsoft Excel and LibreOffice Calc.