Finnish locale typos and other notes

I did some translation during the weekend, client.yml should be 100% currently. I feel like there is a lot of work still in the plugins, server.yml and improving the finnish wording in overall. Just found out that for example the user table in https://domain/u overflows because of the long phrasing.

I’m seeing the same problem in German. I asked our designers if we can fix the user directory. No promises…

Hopefully it gets fixed

It would help if the table header would allow flowing to two rows, because the finnish translations are mostly in two words

I have translated all the plugins that were missing translations, only 6k words to go in the main server.yml side. I’m guessing someone with reviewer access needs to approve the new/modified translation strings?

Hopefully it gets fixed

It would help if the table header would allow flowing to two rows, because the finnish translations are mostly in two words

It will get fixed. We have an internal todo for it, but it might take some time because there’s no easy fix.

I’m guessing someone with reviewer access needs to approve the new/modified translation strings?

Not needed and there are no reviewers for Finnish.

Thank you @codexia for your hard work. I haven’t been able and/or motivated to keep grinding, so it’s so awesome to have someone to keep it going!

I was intending to fix some typos I’ve spotted, but for some reason I’m not able to. When trying to access the Finnish project, I’m getting this error:

I suspect somebody turned off crowdsourced translating into Finnish for some reason? I believe the issue is restricted to Finnish only since I can access other languages just fine. Maybe @gerhard knows what’s going on?

Translation and proofreading disabled for some languages translations

We are currently letting a translation agency translate and proofread Discourse in the following languages: Arabic Chinese Simplified Finnish French German Italian Japanese Portuguese (Brazilian) Spanish That’s why crowdsourcing of translations has been temporarily disabled for those languages in the Discourse (core) project on Crowdin. It’s still possible to translate plugins for all languages. We are doing this in order to increase the quality and consistency of translations. That being sa…

Ah ok, missed that! Sounds awesome. Though now I’m wondering, how did Finnish end up on the list? There aren’t so many of us when compared to speakers of other languages on the list.

This is awesome! Very nice that Finnish ended up on the list

@Silvanus, @rizka, @codexia, @ljpp the new Finnish translation has already been active here on Meta and on your sites (if you have recently updated them).

If you encounter any problems, please let us know by replying to this topic.

If necessary, we will pass your feedback to the official translators to make any corrections!

First of all, many thanks for including Finnish to the list of officially supported/translated languages. This is quite surprising, considering the miniscule size of our country, population and language. People of Minnesota may appreciate this too

Couple things have popped out, but I am having trouble expressing the issue in english - I lack the words and terms of linguistic professionals, but let’s give it a shot.

Flagging used to be flagging (liputa) in Finnish too. This feature is very specific to Discourse and people have used to flagging stuff. Now when you flag a post in FI locale, the term is Merkitse. This comes straight from the anglo-saxian languages, via Swedish, meaning mark. Marking in FI is however a completely neutral word, like a bookmark (kirjanmerkki - literally book-mark). Flagging has a negative emotional charge and is familiar from football where offside calls are flagged by the assisting referees. I see that flagging is still the term in US-EN and the icon is a

as it has always been. I would revert the feature the back to flagging in FI as well.

Now this is not a matter of opinion, but an obvious bug. Apparently this commit changes the inflected forms of FI months and ends up breaking them. Yes, this is where the Finnish grammar gets complex and makes translations occasionally very dificult when done in logical strings.

In FI all months end with -kuu (month, or moon). December is joulukuu (Christmas month). 24th of December in FI is 24. joulukuuta, but in Discourse there are now dialogs where it is shown as 24. jouluta, missing the -kuu (month) part. Jouluta is not a word of any kind in FI.

Hopefully that gibberish made any sense to you or the translators.

In FI all months end with -kuu (month, or moon). December is joulukuu (Christmas month). 24th of December in FI is 24. joulukuu ta , but in Discourse there are now dialogs where it is shown as 24. jouluta , missing the -kuu (month) part. Jouluta is not a word of any kind in FI.

Could you post a screenshot of such a dialog where the month names are wrong?

At same line as system. 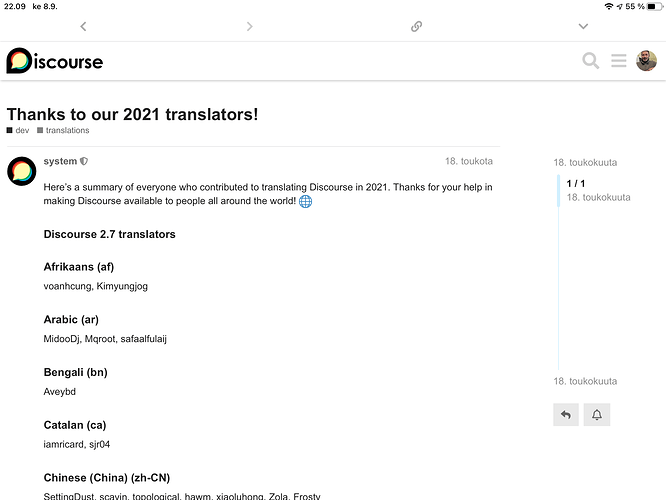 Here is a mobile view example. 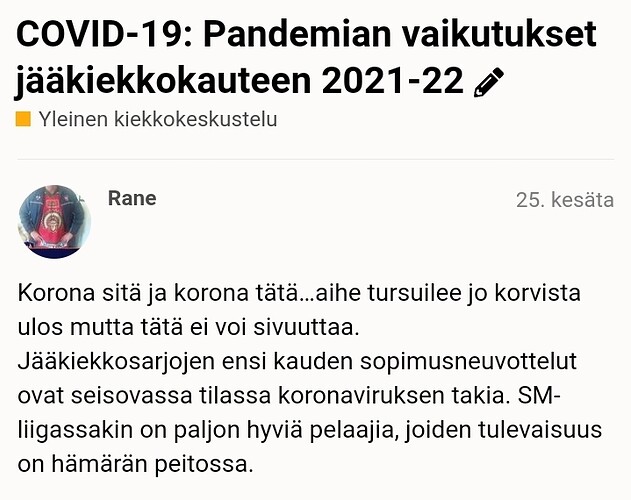 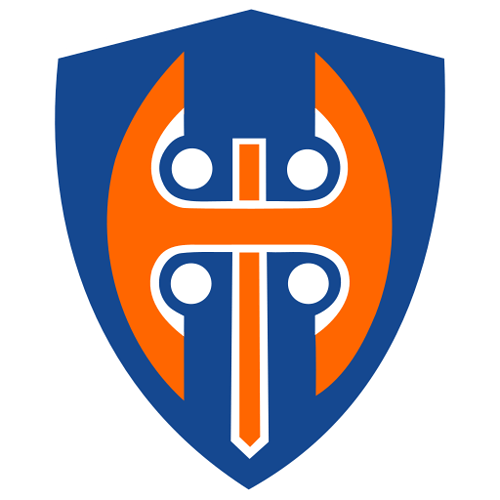 Thanks! I think I found the error. Those should be short month names (e.g “kesä” or “touko”), but the new translations append “ta” to those strings. I’ll fix it on Crowdin and it will be included in next week’s translation update.

Those short names are not quite typical in Finland but sure, everybody recognize them. And these saves only three characters.

But I’m sure you guys have same guidelines for all translations that you are following, so nice you can fix that.

(But if I would have serious biz- or sci-forum there would never been monthnames like those short ones - whole name or number, nothing else

A space is missing from this string, before the number two 2 (number of unread messages)

Here also. If I had written this sentence in compulsory school, the teacher would have slapped me.

In finnish (as globally almost everyone) hour should be h. Not t (because hour is tunti in finnish).

Every finnish understand meaning of t, but it should not use and mostly it isn’t in use.

I’ve fixed it in my setup but should it be right more officially too?

A space is missing from this string,

I’ve fixed it in my setup but should it be right more officially too?

Before I send this report to the translator, @ljpp could you also confirm that it is better to use h instead of t?

Using the “h” is anglicism. Sure, everyone will understand it, but it is english - not finnish. The formal way of expressing time is:

Source: Kielikello, a magazine focusing on formal/proper finnish. They have an awesome collection of online articles available, in finnish.

Since Discourse is being translated to finnish, the target should always be proper/formal finnish, IMHO. Anyone can switch their locale to english if that is the the personal preference.