A summary looking back

It’s now been several months since I first put up topics (here and in Fever Bee) to find some people to join me in a mastermind group. I’m a huge fan of “closing loops,” so I thought I dump some disjointed thoughts and observations…

@coppbacp @osioke @nolo and I formed a mastermind and arranged to meet 10 times, on specific dates.

take-away — having specific dates, times and a set number of meetings, decided by us before we started was a key in our success. “Can I commit to this mastermind at 3pm every Tuesday? Forever? …no way.” But I can commit to a set number. It was a little bit of a bummer to have our last meeting, but overall this made it possible for me to commit.

The Discourse mothership spun up an instance for us, and we used this for coordinating our group. https://cmmastermind.discourse.group We created a topic for each of our meetings at the beginning so we always knew where to discuss.

take away — having a clear place [a Discourse topic in our case] to dicuss the specific meeting was useful. We generally had some ongoing/continued followup from each week, in parallel with the preparation and discussion for the coming week. Without ending up with one enormous topic with everything mixed.

At least one other group (shout out to @skmurphy :) got created. They’re [i think] communicating directly via email, so I’m not sure how they made out.

Each of us (Nolo, Tina, Osioke and myself) had several “aha!” moments during our mastermind. For example, I received invaluable feedback when I presented something I was working on—insightful, first-reactions are priceless. In other places, I made significant changes to how my two communities are set up. So for me at least, I got exactly what I had hoped out of the mastermind.

We also ended up discussing and doing a little work around how to make something more like a game [more like, but not actually, a game] out of the setup. We four were all curious about what’s the minimum structure that has to exist to make it easier for masterminds to spontaneous spring up.

We’ve discussed that we will try [no promises] to continue tinkering on the https://cmmastermind.discourse.group instance in the future. We’d love to see other mastermind groups popping off on their own energy and initiative.

…that’s all I have top of mind. 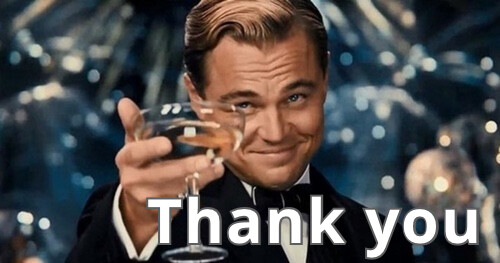 @David3560 and I continue to meet on a regular basis - monthly on first Tuesday, next one is Tue-Apr-5 and compare notes. Others are welcome to join us if they are interested. I can be reached directly at skmurphy@skmurphy.com

Each of us (Nolo, Tina, Osioke and myself) had several “aha!” moments during our mastermind.

It led me to finish a project I started ages ago. I was looking at how communities enable innovation and growth and how these could help communities become economies and ecosystems. It was very helpful hearing first time feedback from everyone, it really changed how I looked at my process.

@craigconstantine thank you so much for initiating this, @nolo @osioke @craigconstantine the meetings and sharing of our 'pain/pinch points/reaction to info was invaluable to me too. I am so grateful for the support this group gave me.

Hey guys, I finally found the time to sketch a theme for the mastermind group instance we’ve been using. As shared in our group, I really liked the mastermind format and wanted to try to support it with a more playful look: 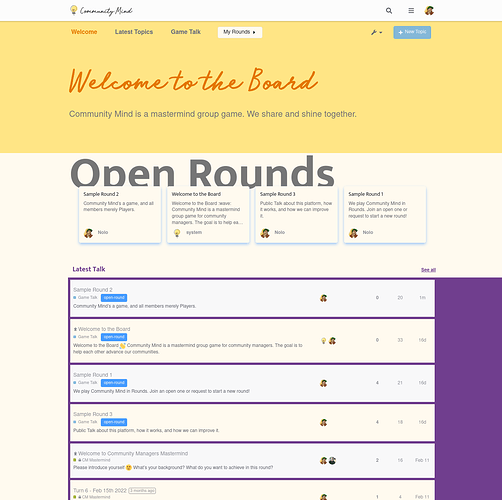 I didn’t change anything about the structure we had been using. So anyone could sign up and just post an idea for a new round in the public “Game Talk” category:

Then when you tag your topic with the “open-round”-tag it will be featured as a new “Open Round” on the landing page.

The link is still the same: 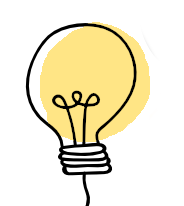 Sweeeeeeeet! Is this theme available elsewhere? I was thinking of leveraging the process and flow you described on a different instance outside our mastermind group for mastermind sessions.

@osioke, it’s a bit rough to work as a general theme. Also need to go over a mobile still. But I’m happy to assist you in setting up some components and looks!

Yay! Let’s do this! The community I am looking to do it on is https://discourse.communitystaples.com/, what do you think, how do we start?