I have been working on a Gitter integration for Discourse as an alternative service to the Slack plugin and I’d like to share the current state of it.

It’s necessary to create a custom integration in each room in which we want Discourse notifications. Once created, go to /admin/plugins/gitter to register a new integration with the room name (e.g. gitterhq/meta) and the integration webhook url.

As you can see below, the admin interface is pretty similar to the Slack plugin’s, allowing to create filter rules specifying a category and some tags(optional). The main difference is that the filter rules are grouped by room. 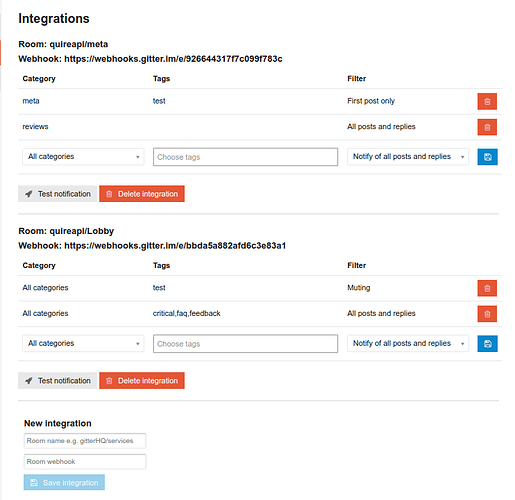 Then, when a new post is created it will be notified in the corresponding Gitter rooms’ activity feed. The notifications follow a simple structure (username - topic title - category) due to the size of the activity feed. In addition, the whole notification text will be a link to the post in Discourse. 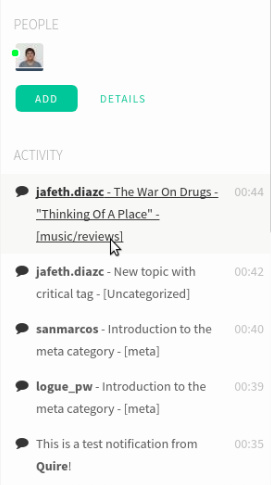 Here is the repo.

In addition, I consider important to mention that the idea is that, in the near future, this plugin makes use of the common event system @david is working on.

This looks great! I quite like the way Gitter has the activity stream separate from the message history.

The main difference is that the filter rules are grouped by room.

This is definitely a lot clearer than having everything in one list. I will see if I can get something similar in the discourse-chat-integration plugin.

the room name (e.g. gitterhq/meta) and the integration webhook url

This confirms my fear expectation that some integration providers are going to require more than a simple “string” to define a channel. I will work out a way that discourse-chat-integration can allow different providers to specify “channels” in different ways

Instructions to enable this feature:

Hey @jafeth.diazc, this looks good! How production ready is this currently?

The gitter bot is already part of the general chat plugin from David?

Sorry for the late response @rriemann. The plugin is pretty much production ready! I’m currently working on its refactorization into the discourse-chat-integration. The inclusion of the Gitter bot might take a little bit longer since the way it is implemented differs from how the other providers implement slash commands and post transcripts.

The inclusion of the Gitter bot might take a little bit longer since the way it is implemented differs from how the other providers implement slash commands and post transcripts.

Unfortunately, I’m not being able to find time to keep working on the Gitter integration’s development at most for a couple of months more. Here is an update of the current state of the plugin.

The other two features Slash Commands and Transcripts are still to be refactored, but that will happen after having handled a few potential issues found. Those are consequence of the way the Gitter integration implements Slash Commands (due to the lack of an official API for that) which is through a long-running thread to listen to a room’s messages. The issues are:

to run the rake task as a polling demon for Gitter.

Finally, if any questions, I’d happily answer them asap