Has anyone tried this RSS poster?

You need to fill in the Interval (minutes) field with a number - this will be how often the feed is checked for updates. 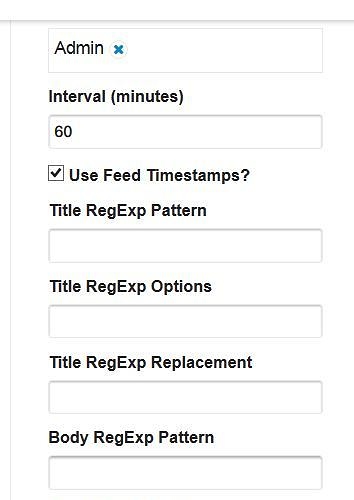 There was a small issue causing the value of the interval field to always be empty - I’ve pushed a fix to the plugin’s repository, so a rebuild should allow you to add new feeds.

Thanks. now it lets me save it.

Hi Leo thanks for this plugin.

Would it be possible to add tagging to the feeds?
This would prevent the need to create lots of categories for regional news etc

Also I’m a bit lost on the regex. I’m looking to add the image from the BBC feeds.

Hi Leo, I’m still getting this issue. The plugin was added yesterday.
It added the first feed but stalls on additional feeds as described above.

I checked it out again with the update. Cant save anything again.

And who uses this plugin? Does it work for you? Ato at me with it discourse does not start (

would you mind putting information on how to format the incoming posts in the readme.md

So they don’t show up as “Something something” and then almost no body content?

Can’t seem to figure it out

This was why I stopped using it. Made the posts look terrible and broken up.

Did you learn how to format the posts through the RegEx? I have no idea - I asked developer but got not answer

Nope. Never got a reply on it either.

Have you found a work around though Zapier or IFTTT or API/Webhooks?

I used IFTTT > Google Alerts as RSS > Slack and they appear clean and perfectly but only because IFTTT lets you format. Trying to replicate this…

Have you found a work around though Zapier or IFTTT or API/Webhooks?

There’s a guide on Zapier here:

Now it works great! Thanks OP!!
I had some trouble getting it working. So I made some changes to the plugins code that is shared from my GitHub
https://github.com/gregruthenbeck/discourse-rss-poster
It’s only been tested against the latest beta version 2.3.0.beta9 +552

This was why I stopped using it. Made the posts look terrible and broken up.

I think I’ve fixed this. Trouble was that the RSS Feed’s HTML was encoded and so Discourse displayed the escaped code, not the formatted post. Screenshot attached 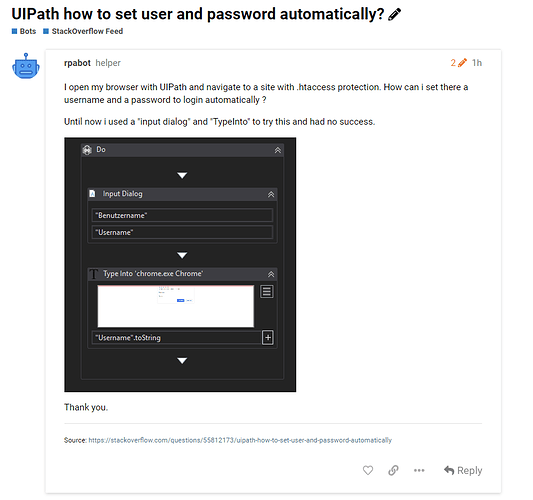 You may or may not find this plugin by @xrav3nz interesting:

We have been using it during more than a year and works very well.

[Paid] Embedding: Allowing one RSS feed and one username per host marketplace

Status update. @xrav3nz developed this Discourse Wellfed plugin that I have been testing in the past two weeks. https://github.com/xrav3nz/discourse-wellfed Importing RSS feeds from different sources and into different categories works very well! You can define the frequency, and in theory you can add dozens of feeds without hogging your server. The only point pending is assigning the topics created to the right user. In fact, this seems to be a problem in Discourse and not in this plugin. Th…

Hi Greg, I had the rss poster working in a discourse instance created last year. Recently I have migrated it to another instance, in a different URL. Apparently the plugin was still working, as it fetched rss entries as soon as I installed it. But I could not access its settings, and in fact the plugins page in the admin panel returned empty. Any hint of what it might be?