Hide "NEW" for TL1 and above

We recently started hiding descriptions in the category drop-down for TL1 users and above. I wonder if we could apply this to some other visuals in Discourse. The first that came to mind is the NEW indicator, which is pretty strong: 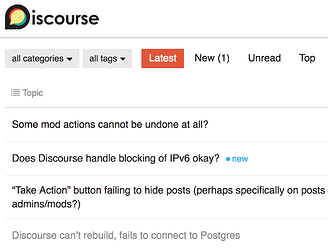 What if we toned it down for TL1? 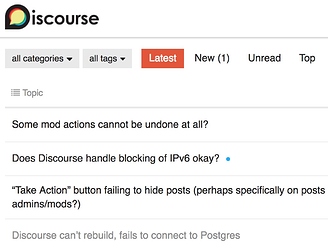 We got close to changing this once, but opted not to. @sam objected to scaling it to TLs for some reason; I’m curious if that thinking has changed.

Personally I think we have a really good opportunity with TLs to do progressive reduction to an extent that few other applications can do with such ease.

I’m fairly neutral on this as a whole. I do like the idea of lessening hand-holding a bit as users get their bearings, but nothing in Discourse has ever really felt too over the top, at least in my opinion.

I’m also not sure if trust level alone is the best metric for determining a user’s familiarity with Discourse, especially TL1. Entering 5 topics or reading 10 mins of post just doesn’t seem like it would always be enough time to get fully accustomed to the way things work.

I like that idea, at least as an alternative to “minimalist design for all always”. Will never forget my most frustrating experience with an electronic device ever: trying to use an iPad 2 for the first time. I almost sent it back.

Anyway, as for the NEW indicator: personally, I like it like it is. Probably because the dot alone is too similar to the unread count. But in the end, it’s probably a matter of taste.

If you minimalize it, though, I’d argue to do it from TL2, not TL1. In addition to @tshenry’s reason, there is also bootstrapping mode users as well as invited users who get TL1 from the start.

We recently started hiding descriptions in the category drop-down for TL1 users and above.

Could you say a bit more about this. The above arguments about TL1 users who are complete noobs might also apply to those changes…

Could you say a bit more about this. The above arguments about TL1 users who are complete noobs might also apply to those changes…

For what it’s worth, you can hover over the names in the dropdown and see the category descriptions in a tooltip to get a reminder. If that wasn’t in place, I might have felt a little uneasy about the change.

you can hover over the names

Don’t forget mobile. And don’t forget those users you have no concept of “hover over”… 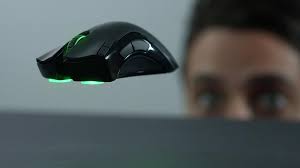 Touché! Those are both excellent points.

I think at the very least, mobile should get some special consideration with any “hand-hold” tiering.

Actual I dont like that idea. Clean design is nice, but some of my users will not understand what the blue dot does mean. Imho: If you really plan to do this, there should be setting to enable, disable or change the thrust level for this. This would be the best compromise to make all happy.

Hmm, I think a better idea is to

Right now if you click / tap on those when there’s nothing in them, you get an “education panel”

But perhaps it is better if those options are suppressed? Something that has been brought up before:

I think the “New” and “Unread” links on the menu should not show at all, if there are no new/unread topics/replies. Is that planned as a future enhancement?

We did some initial user research via a survey and then about a dozen user interviews to learn more about how people are interacting with our site and what they find useful and confusing. We discovered that the top menu is rarely used, and that people were quite confused about the difference between the “New”, “Unread” and “Latest” tabs. Most of the frequent visitors who read a lot just used the Latest tab. In response to this, we are exploring simplifying the top menu. In particular, what I…

My usual “hot spots” for navigating are Latest, Suggested and Notifications. When I do go to New and Unread it’s usually from the bottom of Suggested. And some times from the blue flash that appears above the topic list on Latest.

But that’s me. I don’t know how many others use New and Unread from the top nav links, but I imagine there must be some. And I think it might not be such a good idea to unconditionally remove them upon reaching a certain trust level, though perhaps yet-another-setting could be a good idea.

I agree that not displaying them when there are none makes some sense. But wonder if a toggle might have issues of its own.

5 posts were split to a new topic: I want to customize UI based on the users group membership

@sam objected to scaling it to TLs for some reason; I’m curious if that thinking has changed.

Do you still object to this, @sam? removal of “new” text for TL1+, so just the blue dot carries the significance of new, without the word?

I don’t know how complex of a code change that would be, though.

I saw a site the other day where the new identifier was a dot but if you hovered over it, it expanded to say new. That could work without the TL complication. In addition, I like the idea not to show the new or unread tabs if they are empty.

Fwiw, I use new and unread all the time. In desktop I use keyboard. In Mobile I think I use the looks at the bottom.

Hiding them from to if they are zero seems like a fine idea.

I am 100% for removing new and unread when they are empty. Seems fine to me.

Mixed on removing the word “new” but we can experiment with it I guess. We already suppress the word on mobile.

Would the change for TL1 users also apply to bootstrap mode? @tophee mentioned it above but I can’t see a clarification either way.

It would probably be detrimental to new communities if their first 50 users (who may be using Discourse for the first time) saw less of the on-boarding interface just because they were first through the gate.

We do now hide the word NEW for TL1 and above so closing this as complete.

(New and Unread are also now suppressed when they are empty to reduce the general amount of “stuff” on the screen, which is absolutely a goal in Discourse.)