The web-based updater only allows updating to 3.0 - is there a way to stay on the 2.x line or update to a specific version instead? 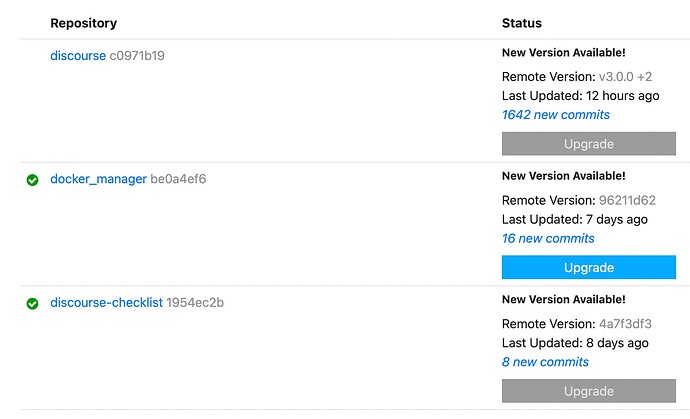 We don’t offer support for versions old than the current stable version, so that isn’t documented nor recommended.

Thanks for your reply. I thought given the major version bump I would hold off on updating in case of any breaking changes, or kinks that need to be ironed out. I also don’t have the bandwidth to answer questions about the new features like chat right now, but it looks like that won’t be enabled automatically so that’s fine.

Discourse does not follow the SemVer spec. Every 2.X release was also a major release.

This image isn’t compatible with Discourse 2.x anymore, and pinning to an old image is not recommended as it contains EOL software in it.

Thanks @Falco, what I was really asking with that question though is if Ubuntu 18 should be able to run the latest Discourse Docker image and thus Discourse v3… I’m assuming yes. I’ll take a snapshot and give it a go

thanks for your help.