Is it a good idea to restrict posting to controversial topics?

Like many forums, we have to deal with some controversial topics, and tempers can and do run high.

One idea I’m considering is to make a “controversial” category, and set up the permissions list so everyone can see the threads, but only TL3 users can post there. It’d be like the Lounge, except that anybody can see what the regulars are saying in there.

The idea is that our trusted regulars can show other folks how we discuss/think about controversial topics, without shutting down the conversation entirely by locking/deleting threads when folks get too upset. “Grown ups only,” we’d say.

Have any of y’all ever tried/seen something like this? Is it a good idea?

Sounds good to me – give it a try and let us know how it goes?

A similar “cool down period” feature is on our long term to-do list. Some preliminary discussion about it here:

"Cool Down" Feature for Mods! feature

Hi! I was wondering if maybe moderators could have a “calm down time” sort of feature to use. Not banning or suspending users, and therefore not affecting them in the future. Just not letting them post like flag e,t,c for a couple hours to help mods defuse a situation in an orderly manner. Maybe even an automated PM reminding them to remain respectful and rather than replying to anything just contact a Mod… Something like that…

Looking forward to hear more about your experiment!

The idea is that our trusted regulars can show other folks how we discuss/think about controversial topics, without shutting down the conversation entirely by locking/deleting threads when folks get too upset. “Grown ups only,” we’d say.

In our community, TL3 and valuable users can easily get carried away by a controversial thread. They put a lot of useful stuff in such threads and we don’t stop them. We watch carefully and, if needed, clean it when it gets quieter. Otherwise they get offended. We embrace posting with arguments and proofs, even if it is getting a bit tense. And then we: 1) clean up a bit; and 2) split into a few topics, which will already have a few comments. I believe restricting posting is not good when it is to the point (fits into main categories of your forum) – you just lose valuable material. I’d recommend learning to deal with it and turn it into useful topics.

But that’s worked for out community – may not work equally well for everyone.

When implementing the solution you mentioned you need to take into account the “Streisand effect”.

The possible negative side effect is that people will move to a different forum, platform, or completely rebel and try to create their own separate forum (I’ve personally seen the later happen in real-time over the course of a few days, I’m looking at your NeoGaf). 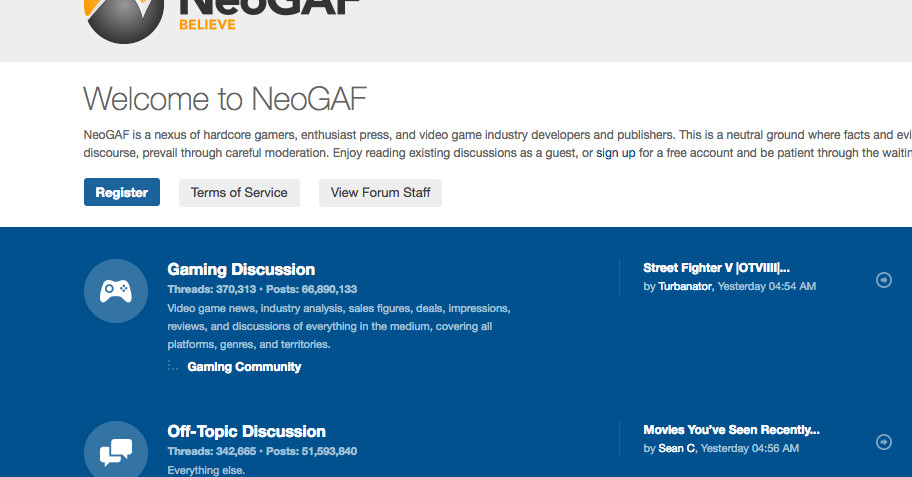 Influential games forum NeoGAF is in disarray after a woman accused owner Tyler Malka of sexual misconduct in 2015. In a Facebook post that’s preserved here, the woman — identified by Kotaku as a...

We have discovered that temporary closing of a topic is a good practice when things get heated.

There is a tendency that certain hours of the week are the windows when this happens. The hockey team most people support often plays games on Fridays and Saturdays. People don’t have work or school on the day after so there are people who are more or less drunk.

Result of the game also has a great influence on the general mood. If Tappara wins (as they more often do than not), things are usually good. But if they lose, people are disappointed and that can be seen in hockey topics of course. But it affects other threads, too. That’s something we must live with: we cannot eliminate all emotion because it is what thrives our community.

But as said, sometimes a controversial topic gets very heated. It’s midnight and a couple of users still keep posting in the topic. Their posts are on-topic, but usually brief and aggressive which nurtures similar posts by others. That’s when a moderator steps in, closes the topic temporarily. He tells that moderators need to go to sleep and tells the participants to do so, too. When the topic reopens in the morning, post quality increases significantly, I address that to people not being drunk and tired anymore and the disappointment of the game result has also faded.

This probably didn’t resonate much in a reader. But rarely this phenomenon can happen in the middle of the day, too. Especially when the topic itself is very controversial. In those cases an intervention and closure of the topic for a couple of hours helps a lot. Tell users to calm down and that it is just an Internet debate. You cannot make everyone to agree with you.

I think that the best way is to keep topics from getting heated in the first place, which might mean either a more stringent signup procedure, or being more willing to ban users who lack the discipline to avoid getting personal.

Also, I think that the Discourse like/flag system works better for casual discussions. For “heavy debate”, having some kind of structured discussions, not unlike the parliamentary procedures of “Robert’s Rules” baked into the forum might serve as an encouragement to grapple with the ideas rather than digression into personal bickering.