Mingle is normally a verb in English so “You’ve been invited to mingle” would be even better.

Okay, I’ve done a little bit of stuff here. Here is a list of stuff I did.

So you can now go “I want the events to happen every 4 weeks”, and then change the time of the next event to be, say, Tuesday at 2pm or whatever you fancy.

Some thoughts on other feedback:

Also, could you make this a Wiki topic plz @codinghorror? [Side note, I wonder if there’s appetite for a setting which allows all topics in a category to be wiki topics automatically]

That already is part of Discourse

In this case, since this is your plugin, it makes sense for people to suggest content and for you to own the edit, but this is a good idea

I am so excited for this! I’m now wondering what’s the easiest way for people to move in and out of being paired for a mingle. For example, is there a way to pre-message people in a group and say something like:

Get ready to mingle! If you want to be paired up with another member of the community on August 27th, click here to sign up. If you want to wait until next time, no action needed.

This would also address the issue @nexo brought up re: inactive users.

Or, maybe a workaround is for the group admin to clear out the group each time and have people add themselves back in? That sounds like a lot of work, though…

I think you can totally handle this manually for the time being.

One-click opt-out seems like a thing we could consider, but for now you could customize your PM template to have something like

Mingle is continually adding admin themes when I rebuild Discourse: 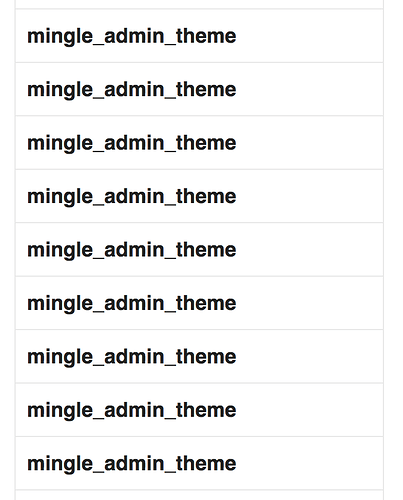 This also seems to be related to “oops” page crashes, in that mingle and the Iconified Header Links theme somehow conflict. When both are active my rebuild always fails. To fix it I have to:

This only happens when Mingle is installed and active.

@FoohonPie Do you know the error that is being thrown? (should be able to see it by visiting /logs)

This is pretty neat - thanks for creating this plugin and sharing it with the community! Is anyone using it with success? How is it going?

I was just talking with some colleagues in my community about bringing people together around themes of shared interest. E.g. people we know to have shared interest who we think should meet. We already do it on an ad hoc basis, but this plugin came to mind as a means to systematize it and not create more opportunities for connecting and engaging.

I wonder if there might be scope and interest to combine this with the Events Plugin 📆 by @angus, to allow for the creation of scheduled mingle events. The events modal when creating an event topic could have a “this is a mingle!” option, which when selected opens up options to set it up including the message template.

Other ideas that spring to mind:

Separately from this it’s occurring to me that it would be interesting to be able to grab a list of users in a particular topic or message, and add them to a discourse group to use for various purposes like this. I suspect there’s already a data explorer query for this (is there?) but some UI method for admins would be neat. Being able to take the people who have contributed to an active topic and obviously have shared interest and starting a mingle event for them would be super interesting.

And finally, I’d love to see the Voice recording plugin by @pawel get some love, which would really make mingling a heck of a lot more dynamic and fun… letting people save recorded messages to each other.

Mingle is continually adding admin themes when I rebuild Discourse:

Had a quick glance at this, in the context of this topic

@gdpelican I think the issue is here:

Here are the /logs errors from hitting it again earlier today:

The weird thing is, even after removing mingle entirely, including the themes it adds, my site remains broken until I disable Iconified Header Links. Yet, it only ever happens when mingle starts off in the mix. I’m not sure what to make of that, but it seems worth noting.

Thanks, I’ll patch that up over the weekend.

EDIT: Alright, that issue with the theme id should now be patched up.

Any chance you will further develop this plugin to ensure that mingle matches are not from within the same group, when mingling groups? I’m creating a discourse community that will have several user types, all related with one another in the same industry of engineering, and I’d like to mingle them in ways that will be mutually beneficial. It would be less beneficial to mingle those of the same group, at least for my use case. Thoughts?

Circling-back on this. My forum has a focus on humanitarian engineering, and I will have groups of mentors and proteges, as well as those seeking and providing help. It would be great to connect these folks in a targeted way. Has there been any development in ensuring that mingle will not match folks within the same group?

hi Joshua! I haven’t looked at this plugin for a while, but it seems to me you can get what you want just by creating a new group to use for mingling. This group does not need to be used for any other purpose or be publicly visible to members. Add whoever you want to your minglers group from your other groups and allow them to mingle!

I’ve made it so that the group input can accept multiple group names delimited by | . So you can put

It looks like this wasn’t made specifically for that use case but I think I see where you’re going @Joshua_Kogan, i may have had a similar idea in mind.

To take that idea a bit further, I could see the usefulness (selfishly) of also allowing boolean type logic in facilitating targeted matches.

Consider a not-that-hypothetical forum with groups for different majors at a university & groups for the years members graduated in like this:

As an admin I might want to pair current students who study Computer Science with alumni who studied Computer Science and do the same for Chemical Engineering majors. In which case I might specify my mingle configuration to target people with mutual/intersecting membership in certain groups as follows:

I may have snuck in an extra feature explanation here for allowing you to set up multiple configurations at once, but that would really only make sense if you could target matches to exclusively have members from specific groups.

Curious if anyone sees value in such a feature/extension of this plugin?

Just curious is this plugin broken for anyone else?

I can see some other purposes of this. In gaming forum, auto pairing two people every defined interval could be a random duel or challenge.

From what i understand, the current feature set only allows you to define matches amongst a group or combination of groups but doesn’t offer any guarantee that matches will be between people in different groups.

to answer in short:

Can I basically just setup a Mingle between users of only trust level 0?

lol agree would be more fun, but no, its not currently an option

I got this in my logs and seems to be something deprecated in Mingle?

oh, true, yes. i just added that to the open PR as well, thanks