Continuing the discussion from Watching and tracking implementation for tags and categories:

@sam please tell me if I’ve gotten this right.

Here’s this topic that was created way back in May 2014: https://meta.discourse.org/t/how-to-handle-multiple-account/15244?u=erlend_sh

I’m tracking the feature category, so as per our tracking updates in 2016, I should be seeing this topic pop up as unread now that it has been bumped up with new replies, but I don’t: 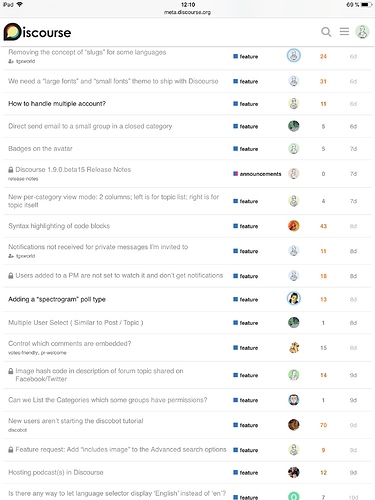 I just discovered it (along with several others) today.

This sounds similar to what I reported before. I think the problem boils down to:

Thanks for taking the time to look at this. The settings on my account are the same as the defaults for all our users - consider new when “haven’t viewed them yet”. I suspect the reason that the topics aren’t all showing up in “new” is because all the users have their “first_seen_at” field set to the date of the import, and therefore after the topic was initially created. So I think the problem is: Topic does not show up in “new” because it was created before the user first visited the forum …

This is something I found a while ago, and a thread can be found here (not entirely sure why it got moved from #bug to #feature). The thread is quite confusing as I originally thought the problem was caused by the initial import from phpBB. So here’s an attempt to summarise: It comes down to the fact that a topic cannot be both new and unread simultaneously: Even though it’s implicitly tracked, topic does not show up in unread because the user has never viewed it Topic does not show up in n…

How is this problem different from Completely unread topics with recent replies should show as new?

How is this problem different from Completely unread topics with recent replies should show as new?

They’re closely related but this is regarding a category I’m tracking, and should therefore be tracking all topics within it unless ever I opted otherwise on a per-topic basis.

So here I’m talking about topics that I think should be showing up as Unread. (I.e. it appears the system is not working exactly as intended)

The other topic is regarding topics which are not in tracked categories, but should still show up as

when certain conditions are met. (I.e. a new feature.)

It has indeed gotten confusing though, because I believe this:

Perhaps, one thing that is “cheap” that we could do.

If a topic in a tracked category is bumped, add it back to “new” for whatever the new duration is.

100% solves this: Completely unread topics with recent replies should show as new

But it is only a partial solution to the Unread problem I’m raising here. When a category is tracked, old topics with new replies should show up in Unread. But maybe we can live with this little logical discrepancy. The important thing is that topics are not missed and email-only users receive an update.

My rough imperfect translation is

I have quite a few categories set to Watching and necro’d topics I have not previously visited in those categories come to my attention without a problem.

Any reasons Watching doesn’t work for you?

EDIT
(feels off-topic, but might be related)
Maybe not so much “without a problem”. It took me a bit of scrolling but I found a topic in the Feature category (that I Watch) that I had not visited, but was not a New and had the notifications level Nomal.

The option to enforce tagging feature

I’ve requested in the past that there be a setting to enforce the use of at least one pre-existing tag when creating a topic. I’m now aware of 3 separate use cases for this requirement (all current Discourse clients). More community structures are becoming reliant on tagging. Communities that rely on tags for surfacing content. Large communities that use complex tags and tag groups for their AI. I’ve forgotten the details of the third one but I’ll edit it in. These are creating a heavy mod l…

I’m guessing it was started in a category I’m not watching, was moved, and the edit history indicating the move was deleted?

Sort of – even on normal, if someone @mentions you, replies to you directly, or quotes you, you will get notified. So I would suggest