Need something very similar to what Quora is doing:

When do you need it done?

As soon as possible

What is your budget, in $ USD that you can offer for this task?

Don’t have a fixed budget, maybe some other members are also interested in this type of plugin and can chip in? I’m willing to spend up to 500$ for this plugin at this point.

I’m willing to take this on as a project for $500. It will probably be more work but we (Communiteq (formerly DiscourseHosting)) will sponsor the rest.

So if there are some people willing to test and/or chip in that would be great.

Im willing to give it a test

Disappeared is a bit of an exageration don’t you think? I think I’ve made it pretty clear in the OP here and also in private messages what the REQ’s are and they don’t come close to what I need and what was explicitly mentioned as mandatory. Not to mention the latest update of the github was long time ago so I’m not sure how it could have been codes at my request but that’s another story, maybe I’m not savvy enough to notice the latest updates and the custom work that was done (even though the plug-in is not remotely similar to what I need). Simple request, I need a quora like guest-gate with blurred content and a modal pop-up for login/registry (the native one of discourse) and the guest-gate not to affect normal functions of the forum and crawlers activity. Anything else or less is out of scope. Sorry about that.

Disappeared is a bit of an exageration don’t you think?

I gave you access to a test environment 13 days ago and you did not respond to any emails or PM’s since then. How do you want me to call that instead?

The code is in a private repository for now so it’s logical you didn’t see any changes to the code. I suggest you test it in the test environment I made available to you, give me honest and constructive feedback if anything is actually wrong, and pay me for the work I did for you.

Michael unfortunately your emails are landing straight to the spam folder in Gmail.

Regading the guest gate, unfortunately it’s not accoring to the mentioned requirements which are public here in this thread but also by PM. 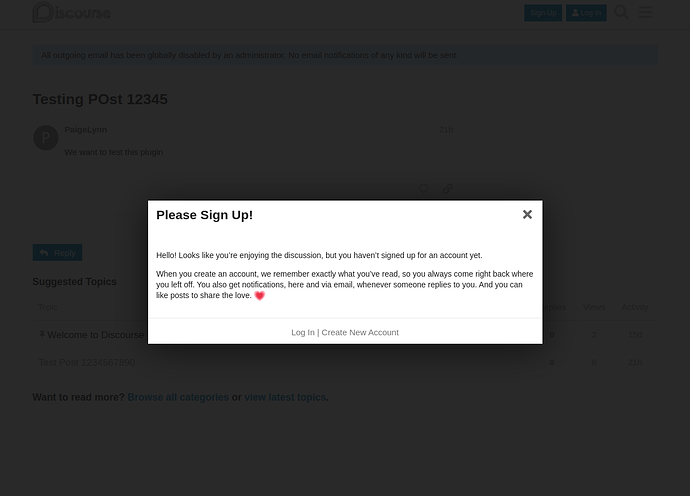 This is the guest-gate in the test enviroment which is pretty much different than what I need which is something like this:

I’m not a CSS expert or coder that is able to modify a plugin so if I need a plugin i really need it according to my needs as I don’t have the knowlege to bring something similar to what’s necessary.

You asked for it to have it CSS modifiable so you could change the blur yourself. But I will give you an example tomorrow.

There is no social configured on the test environment. You have admin access so you could attempt that yourself.

I also sent you PM’s here, did they end up in spam as well?

Anyway - I will add some CSS for the blur for you and let you know.

You’ll have to send me some instructions regarding where to do the CSS editing as in this moment I don’t know.

Current status: @juless is not responding and/or paying for my work.

Hopefully you asked for half up front?

No, I did not - and this is the first time in six years of doing dev work around Discourse that my trust has been damaged.

So yes, unfortunately the moment has come that I will be asking half up front as well.

As I told you by PM I didn’t had time to handle this matter and try the plug-in. You can check the test environment statistics to see I haven’t even logged in. It’s not like I’ve ran with your hard work and left you empty handed. I understand your frustration but is something I informed you about, it was August and in parts of the world August is a holiday month, I’m sure you can understand. Once I’ll try the plug-in hopefully today or tomorrow I will make the payment in full and add an extra for the delay. If you need a public apology I’ll make one but I can’t pretend I’m not bothered by the public shaming you’re doing every time I miss answering you for a few days.

It’s a bit more nuanced. Last time I heard from you was two weeks ago and you told me you were going to check in two days. In the past eleven days (those were in September by the way) I have sent you three reminders and I did not get any response at all. So please do not pretend I am impatient.

Anyway. Good to hear that you’re back. Awaiting your feedback!