RateLimiter::LimitExceeded for second topic received by email from TL3 user

Continuing the discussion from Turning off RateLimiter::LimitExceeded entirely for one user?:

I did the following:

This worked the first time, with a topic automatically created. A few hours later, the second email came through but was rejected: 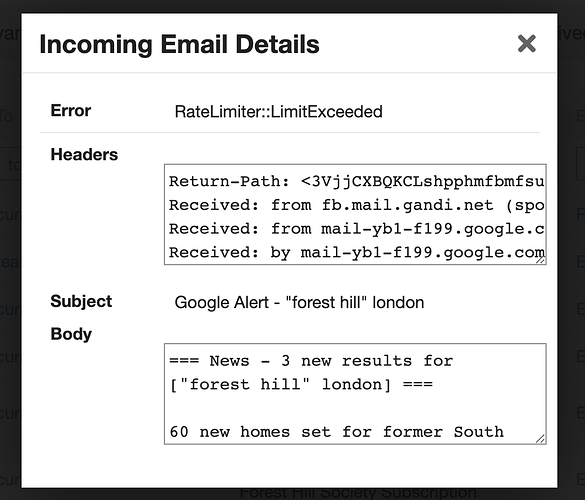 I looked in the server logs but there was nothing much there, and I still don’t understand what triggered the rate limit. This is only the second topic created by the user, and the user was TL3 at the time.

When similar RateLimiter errors were discussed before on meta, the recommended workaround was to make feed ingester users admin. That way, they wouldn’t be subject to rate limits. I’m reluctant to do so here, as this is a permanent user (not just for a one-off import), and making extra users admin is a bit of a security hole - and it would also look peculiar to visitors.

How many topics are being created by this user, and how quickly?

Only two emails so far.

I thought at first that there was a gap of a few hours between the two emails but I’ve just looked a bit more closely and they both came at the same time. Looks like I’ve probably hit the “rate limit create topic” (defaults to 15 seconds). I’ll try changing this to zero.

Just be aware modifying this setting opens you up to spammers, etc. It’s best to only relax settings for trusted users, not everyone.

Just be aware modifying this setting opens you up to spammers, etc. It’s best to only relax settings for trusted users, not everyone.

Thanks for the warning. I’m nervous about changing these limits, although helpfully Discourse has a separate “rate limit new user create topic”, which I’ve left at 120: