On the left hand side of each post , there is a thumbnail showing the 1st uploaded / linked picture.

The thumbnail doesn’t need to be large, for example Reddit is just using a 70px size thumbnail.

This can let readers get more interested by have a sneak preview of what’s inside the thread by attractive graphics.

( Of course, this should be set as an option, so any admin who doesn’t like this function can enable / disable at will )

14 Likes
Thumbnails of images in topics list
Topic listing indicates if topic has images
Can I use a topic title as a link to another site?
codinghorror (Jeff Atwood) February 27, 2014, 6:45am #2

Can you provide examples of other forums, real forums, that do this? Screenshots?

Don’t you aim to build the forum of the future?

According to the logic if I can’t provide example of real forums that can do this and so this is a bad idea , I also can’t give real examples for what a next-gen forum / bulletin board looks like 1 year ago when Discourse hadn’t been existed yet. So does it mean Discourse shouldn’t even exist if " No past real examples are provided " ?

This feature request doesn’t make any sense to me. Reddit works this way:

Here is a hee-larious picture of a dog. Vote it up and comment on it.

Forums generally do not work this way. It’s highly unusual to have the entire focus of the topic be an image or unadorned link in the first post.

And in the case of a website link as the first post, are we going to generate a thumbnail of the website and show that as the image? That… also does not make any sense to me.

This maybe the case in Western world , but I think there are much more possibilities than you can think.

Many people here ( I mean in the Eastern ) use forums not just a communication and debate tool , but also for sharing pictures ( something like 9gag ) with their own opinions , and even use as a minor private goods trading platform (imagine a yahoo auction or ebay without any charges , just for friends to trade and sell their beloved stuff).

For examples of the further use of a forum , you can have a look of how a Chinese made forum called Discuz . ( Now this forum is dominating the whole Chinese community , and I do hope Discourse and go and challenge them )
It’s true that they added too many rubbish features that made the forum bulky recently, but my main point is : “Forum” as a forum is only valid, when they can attract more people and gather at the same place for discussion, and thumbnails is one of the ways to achieve this in my opinion.

PS. My recent experience tells me , my readers are unwilling to change to use a new forum (Keep on using the Facebook group) , even if I promoted them to use a such revolutionary Discourse forum to them.

Forget Reddit! Think about a possibility to add a thumbnail just as you add a title for the topic. This makes the topic more interesting and the whole board index looks more attractive and modern.
The classic forums, and this you are builid here, are boring. Yes, boring. Just a list of titles and avatars. Not cool and out of the zeitgeist!

Well, you can see a “best of” mode here where they go out and grab a bunch of random images and content from topics that reached some hotness threshold:

Yet again the Pinterest cancer. Does this layout and random image-grabbing have value for anyone reading this post? Would anyone use this for any reason at all other than a sales demo?

I’m also not enthused about the idea of having to pick an image for every topic. That’s… real work for someone. If the topic happens to have great images in it, fantastic, but not many do.

This can be an optional feature. Not every topic needs a photo thumbnail, but some do need it. Some communities are more photo-centric, and some not. I think this could be a feature just like the feature that you can upload one or more photos for the post.

We are still talking here about the forum of the future

PS: I’m in the “forum business” since more than 10 years. I used to try most of the forum softwares out there. I think I know what is good and what not.

Sure, that’s fine, but as a default – this doesn’t match any known set of forum behaviors I have ever observed.

If you can provide real world examples of this (other than Reddit, which isn’t a forum at all), happy to look at them.

I also, managed forum for more than 10 years, and I do believe I know what my readers want.

If we need to prove something is good , but that stuff doesn’t really existed yet , does it mean that
Steve Jobs never need to re-invent the phone (a.k.a iPhone) , just because there are no real world examples of a multitouch-keyboard-free smartphone yet ? We’re not talking about copying Pinterest completely, just using the good ways Pinterest handles with posts and implement in into the forum, because human beings are more easily attracted by images rather than texts. (Just like iPhone is a concept of implementing GUI into the big screen by fingers only. ) Just my 2 cents.

In the forum space, mostly what we get to look at is people imagineering awful, awful “solutions” that just make things worse. This has been going on for over a decade now.

If anything we need less features. Not more.

If I was to (have someone else-) implement something like this on my forum (and in the not too distant future I very well might!) I would suggest we do the following:

First of all, it would obviously be a plugin.

Next, make a separate index page to live alongside Latest, Categories etc.

This page would collect image posts from certain show-case centric categories on my forum, and exclude the troubleshooting categories because the pictures there are usually not eyecandy.

The page would have a Pinterest-like layout (I prefer an even-sized grid though; all thumbnails created equal) showing the amount of likes each post has and maybe giving some sorting options like “most popular this day/week/month” etc.

Following this method, the ones looking specifically for pictures can go where the pictures are while the rest of us can continue entering topics based on the topical value alone, undisturbed by additional sparkly things.

Edit: I realised that without some examples I basically just described the PA BestOf, which is horrible, so here are some better examples, which are all non-forum but could definitely work in that context:

First, go way from Pinterest! We don’t need a forum-gallery here, but a regular forum, with regular topics, where some of these topics could have tiny thumbnails if the user chooses so. That is.
I like http://gizmodo.com/ for example. Focused on the topics with tiny (ok sometimes big) and not intrusive pics.

This is how I see this kind of new forum thing:

I’m not a programmer, nor a designer, but I guess you can implement this easily.
You have the pinned topics here: what about a new kind of topic with title, description and thumbnail: let’s call it “special topic”. Alongside the regular topics (with just the title on the frontpage) we could have the pinned topics and these “special topics” with more informations and media.

You mean something link this? 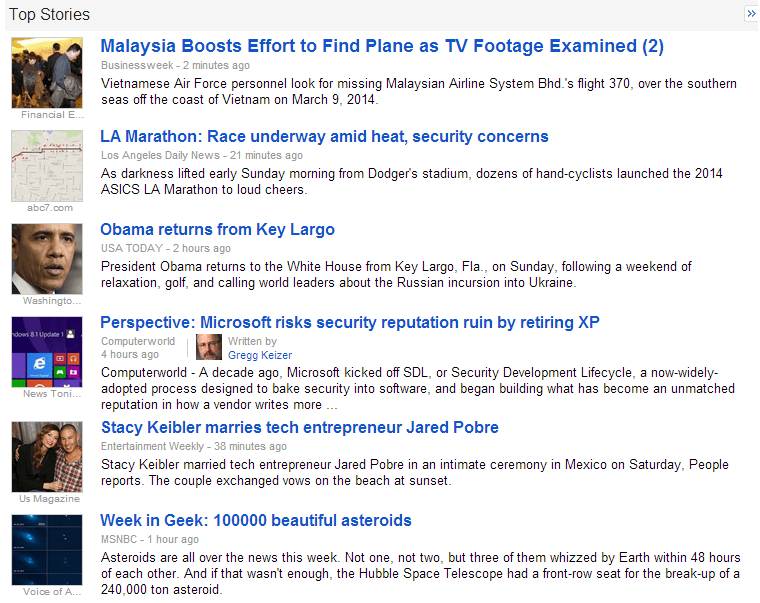 It really does seem like trying to use discourse as something other than a forum, so certainly plug-in material at best.

But not the craziest idea to use discourse for something other than it was originally intended… It is being done already, after all.

I’ll jump in as I put in a feature request for an image content notification. The two forums that I have run over the years have been watch and 4x4 truck based. In both of these images played a large part of the discussion around topics. Less so with the 4x4 forum unless it was modification based or trail pics. But on the watch forum images are a key feature. Sure there is a lot of discussion without images but for some people just looking at a few pics is and ideal time break and this would help them find the thread to click.

It does not have to be the image but more just an icon or identifier that the thread has images. In our case a link notification would not have been a request.

Although I don’t like the idea of having thumbnails in core, it would be cool if categories could optionally be icons.

Like on a health-related forum, heart disease would be a heart icon and osteoporosis a bone icon. That’s pretty simple, doesn’t make it pinterest-y, and could be a cool plugin.

@mcwumbly yep, actually this is what i mean.

Here is another example：

I would like discourse to have this feature :
On the left hand side of each post , there is a thumbnail showing the 1st uploaded / linked picture.
The thumbnail doesn’t need to be large, for example Reddit is just using a 70px size thumbnail.
This can let readers get more interested by have a sneak preview of what’s inside the thread by attractive graphics.
( Of course, this should be set as an option, so any admin who doesn’t like this function can enable / disable at will )

Currently im testing Discourse and am very happy. This option would useful to me. I would like to see thumbnails of images and movies youtube / vimeo / LiveLeak.

Maybe let it not be enabled by default, but as an option?