I only have it configured for one particular category, but the example code above will apply this to all categories.

I only wanted it on one category because from my understanding topic.image_url will only pull an image from the first post of a topic and many of my topics don’t have images, except for games.

First, i want to say that I love Discourse and I love the work you are doing.

I was looking for exactly this feature and I got a bit disappointed when I read this thread. I really think it’s a feature that could help boost community engagement by making the overall ux more visual.

For example, I read a few subreddits like Science, Futurology, or Technology, and since a lot of the things that are discussed there can be linked to a picture, it helps a lot to “preview” what they are talking about. Like if there is a thread discussing a new video about Google Self driving car, I can easily see if I already saw that video or if it is a nee one.

Anyway, I really do think it would be a great and beneficial feature for any community. It doesn’t has to look like pinterest, and i think it doesn’t go against the idea of using mainly text to communicate and have fun and share information, but it enriches it.

Only to “detect” the first image used in a thread and have that URL available on the topics view would be enough; do you think that would be doable?

It would be really cool if you could give it another thought. Maybe the future of forums is just a bit more visual!

Thanks again for Discourse

Only to “detect” the first image used in a thread and have that URL available on the topics view would be enough; do you think that would be doable?

Isn’t that what topic.image_url is already doing? I believe it may only be the first image in the first post, but that should still serve most of your purposes. You would just have to modify the template to put the thumbnail somewhere, but as Sam has shown, that is very easy to do in the customize menu now.

Oh Great, I thought that was only for category listings.

Yes, topic.image_url would be enough for most cases, although it would be best to search the whole topic for images.

But again, that will work so thanks for pointing that out

Thanks for the solution for thumbnails, @rewphus.
Sorry to ask this newbie question, but I still don’t understand how to add the “Header” code into my forum. I don’t think it goes in “Customize” because you are editing html that already exists, and not adding it, right?
I don’t really know how to do this, can I get some help? I’ve been looking around the internet about how to edit files but I haven’t get any good documentation. Thanks!

I think I may have addressed your question at a higher level in your other topic, but for the sake of completness, this is actually added under Customize in the admin panel using a script:

I didn’t put all of the code here because Sam does a much better job of explaining that part in his topic.

We implemented this on our site www.smartwatch.me for the desktop theme but has anyone been able to do it on the mobile theme?

Is it possible to have a topic.image_url that looks inside oneboxes? It’s related to this topic because @rewphus customization use it.

I was asked a question about this here, so just making a few notes here as this feature seems to have a fair amount of interest.

Note that the topic list item properties are available in your new connected view through the context object. See further here. 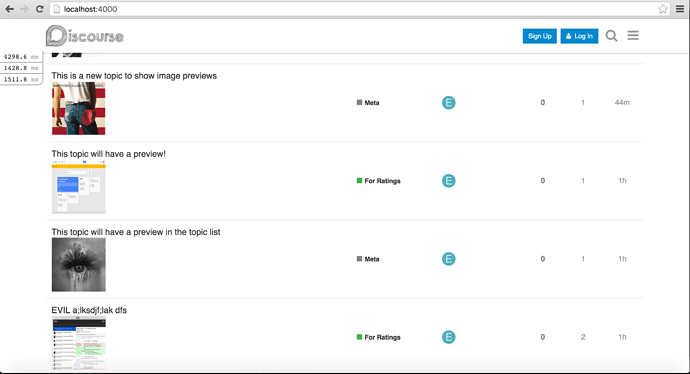 Have you found a way to differentiate between desktop view and mobile view ?

I imagine in many cases it would not make a difference, but I would like to know if it’s possible to take advantage of this in some way if it were so desired to do so…

I’m not sure about differentiating between the outlets per se as I think they are effectively the same(?).

But within the connected view itself you can add a {{#if context.site.mobileView}}{{else}}{{/if}} to show different content on mobile web; e.g.

Here’s a screencast of that at work: http://quick.as/B0abIDjg8

I just committed the update example to the example repo.

I must have tried at least 3 dozen “guess” variations, none of which worked.
“site” was the charm.

In my case I’m wanting to have both separate, so instead of one with an else, this works for targetting desktop

Maybe not so perfect

Yes, this seems to be due to the different way/context in which the topic-list used for Suggested is instantiated. I tried a few different approaches, but wasn’t able to come up with a solution. Unless I’m missing something, it’s perhaps more of an issue with Suggested topics itself… I’ll give it another shot later this weekend.

I know this is an extremely old conversation, but I wanted to provide a few other counter points for @codinghorror for massively successful communities that require images for header posts: Art communities. Perhaps the best one I’ve encountered is the multi-million $$ community CG Society, which uses the thumbnails on select sub-threads, usually competitions, where each new thread is an artist submission. For example:

This concept exists in many many different concepts and styles, some more discussion based, some more image only based. Many fall on the same side of the discussion as you’ve stated - no header images. While I agree that it usually leads to ugly garbage, in scenarios where it is manicured (art competitions, etc) it leads to quite beautiful, easy to browse glimpses of the entire community at hand.

I’ve only just joined the conversation because I’m looking to use discourse for a new cg community, and will want solutions for the exact listed scenario described above.

We have the exact same scenario on Blender Artists, which we are in the process of migrating to Discourse. We need the thumbnails explicitly for, and only for the artwork forums, whereby the thumbnails are very helpful for grabbing viewers initial attention towards the shared artwork.

@keith1 @carter2422 Guys, a plugin already exists for this feature. You just need to change the CSS.

If you have any specific feature requests, I’d be happy to add them.

Am building a discount discussion forum and am asking users to try and post images where applicable. So when my users are browsing the forum its the images that may take their fancy. This would be a great feature but I dont see why we need to argue over it. Just build a plugin or have someone build one. Thats the great thing about plug ins, not everyone will use them but they will be very valuable to some.

And in the case of a website link as the first post, are we going to generate a thumbnail of the website and show that as the image?

We ended up doing this with improved auto oneboxing and pasting a link into the title of a new topic.

But the thumbnail is in the topic itself; the topic list shows a link domain source and glyph like so:

Can you show me a real world example of this on an existing site? Thanks

There’s a screenshot of it above. Give it a shot on try.discourse.org to see it yourself.