I noticed on several discourse forums that over time they attract people who love writing very long posts about all sort of details which do relate to the topic, but are not an immidiate reaction to the topic.
These are not posters with any bad intentions, but such posts do disrubt the conversation, because not everyone has the time to filter long posts to see how they relate to the discussion.

There is nothing wrong with long posts. But it becomes an issue when the post only sums up loats of rather irrelevant facts, without bringing anything new to the discussion.

I saw there is another topic on this forum about adding a downvote option. I don’t think that is the right solution for this issue. In fact I think we already have a useful feature, but it requires a modification:

There is already a function to ‘report this post as off-topic’. When a couple people report a post as off-topuc, the post is hidden/collapsed by default, wich hints other users to not bother reading that post unless they want to be thurough.

The issue at hand is that the name of this button doesn’t fit the situation; the post is not exactly off topic, so most users wouldn’t report a post because it seems inapropriate to do so.

I also propose to not place that button in the category ‘report’. Reporting feels like marking a post as something wrongful. It seems like a heavy measure. I would rather see this as a seperate button; a way of voicing an opinion about the post to help other readers.

I hope you recognize the need for such a feature, and I hope succeeded in explaining the importance of the choice of words for such a button. It is important that both the reporters and the one who wrote a ‘not helpful’ post recognize that it is not a punishment, but just a way to keep the discussion on point.

Admins can already do that via Customize > Text content > off_topic

Can they also change the text shown to replace a hidden post? “This post has been marked by the community as probably not helpful. Click here to show it anyway.”

And can it be moved out of the ‘notify the staff privatly’ submenu, as the staff should play no role in voicing an opinion.

Admins can modify the text in the UI. Simply search for it in the Text Content search box.

Moving it out of the “Notify staff” section is not an option for admins. Check in #marketplace if a plugin can be written to do that.

As alternative to ‘Mark as not helpful’, it could also be ‘Mark as distracting’.

In my experience this could be a useful default feature to discourse, to help improve the quality of discussions. 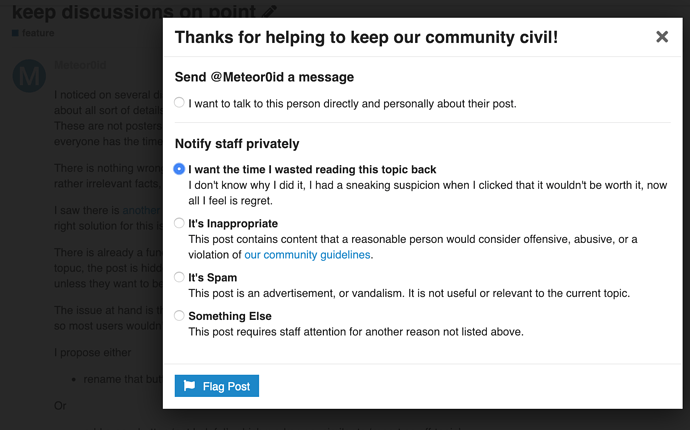 See that’s both funny and concerning.

Apoearently someone here at meta.discourse already saw a need to add such an option so people wouldn’t use any other report function to give feedback about the quality of a post.

Doesn’t that illustrate that there is a significant need for such a flag as a default function on any discourse forum?

Let users help eachother by marking posts as distracting from, or not helpful to the intended topic.

I get that you’ve probably read many feature requests like this one before, but besides joking about it please give me an explanation why it doesn’t seem like a useful addition to you.

someone here at meta.discourse already saw a need to add such an option

It’s just you so far!

Doesn’t that illustrate that there is a significant need for such a flag as a default function on any discourse forum?

I don’t really see a need for “Not Helpful” as this is a forum not a help group of sorts.
You can easily add such an outlet using a plugin of sorts but for the core, there is a very vast spectrum of customers and users who use discourse for all types of purposes. Not helpful isn’t the most promising piece of text. It’s just like adding a Dislike/Down vote button which is very resisted by discourse.

And by reporting not helpful you’re just adding useless load to the mods and admins who would have to review those posts just because you find them not helpful.

Apoearently someone here at meta.discourse already saw a need to add such an option so people wouldn’t use any other report function to give feedback about the quality of a post.

I will avoid future attempts at humor and henceforth disable Chrome’s developers tools.

I knew not the power of what I wrought.

Off-topic replies are very common, and that’s the default option we find suitable for most sites. As discussed earlier, if you find different wording more suitable for your site that’s something you have control over in your site settings.

“Something else” or “Send a message” (if PMs are enabled) are also possible alternatives.

If someone’s often disruptive to conversation in your community, talking to them about (regardless of flagging options) it is likely the best option because you can explain why their post isn’t helpful.

We have no plans to change our flagging options for the foreseeable future, and I think we’ve covered everything here.