Reply to topic scrolls reply out of view on Firefox Android

On mobile, whenever I post a reply, the topic is resumed some way back and my new post is out of view. If I don’t then manually scroll it back into view, it remains unread, which is annoying!

Edit: I’m pretty sure this started happening when we upgraded and the new scroll mechanism was introduced. (Which even after months of use I still hate - previous was clunky but much better than this “click to reveal a painful scroll bar” thingy. I preferred typing in a post number).

Not sure which Discourse version, but we’re on your hosting I believe: Post reply scrolls thread backwards - Meta - SAFE Network Forum

Firefox on Android is going to be a bit sketchy, it has a lot of quirks that aren’t present in desktop Firefox. I strongly recommend the default browser on Android, Chrome.

What is happening is FF is scrolling back to the oldest post loaded. This is typically the first post or 20 posts up, depending on topic size. (You know the window size for loading posts better than I do.) This happens after adding a new post to a public topic.

We don’t test on Firefox for Android, but any bugs you see there should be reported to Mozilla for fixing as they aren’t present on Chrome/Android with the exact same HTML/JS (or iOS Mobile Safari, of course).

You can still type in a post number, use the “Jump to…” button 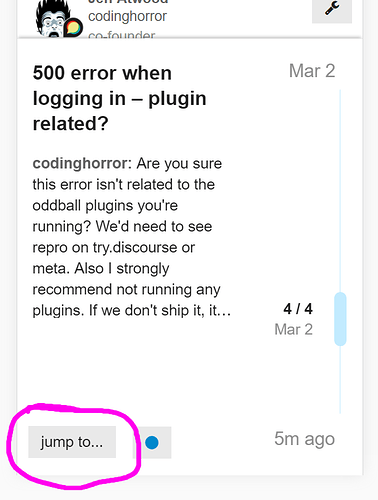 There are a lot of actions needed for that.

Thanks Jeff. @elijah has responded correctly, and exactly as I would have to your questions. You are wrong to suggest that using the new Jump UX is comparable to the old.

That’s a shame because I choose to use Firefox on all my devices, not just mobile. It’s useful to use the same browser on mobile and tablet due to sync and UX, and I prefer to keep Chrome/Chromium use to a minimum partly because I do not trust Google with my activity or data, and because their business model is abhorrent to me.

I do understand the difficulty of supporting multiple browsers and platforms, but hope that there are enough FF mobile users to nudge you in this direction.

Discourse is a great product and I was and am a big supporter of its use by MaidSafe and SAFEnetwork - I modetated their Discourse forum for a couple of years, and use it every day. I have to live with this bug, but there are worse things in life

I choose to use Firefox on all my devices, not just mobile.

You should definitely contact Mozilla and file these Android Firefox behaviors as browser bugs, which they are.

We test on Android/Chrome and iOS/Safari extensively and we don’t observe any such problems in those two browsers with the exact same HTML, CSS, and JavaScript.

@happybeing quick question for you. Do you have the Don’t jump to my post after I reply set? I do, I wonder if that is it. I don’t think @codinghorror uses that.

I did. Turned off to write this Reply and the result is… FIXED!

Thanks a million @elijah

Looks like with that set you get undesirable behaviour, bug or not.

Update: the initial reply remained in view. But when I did the edit to say FIXED I was scrolled back to the OP!

Still, much better than before if it is only affecting edits now.

That would be excellent if this is the bug, because that will be much easier to fix than contacting Mozilla