Hi @angus ,
Thank you so much for your reply. I do notice several red lines in the console, please see the picture below from Opera whenever I entered to a post. 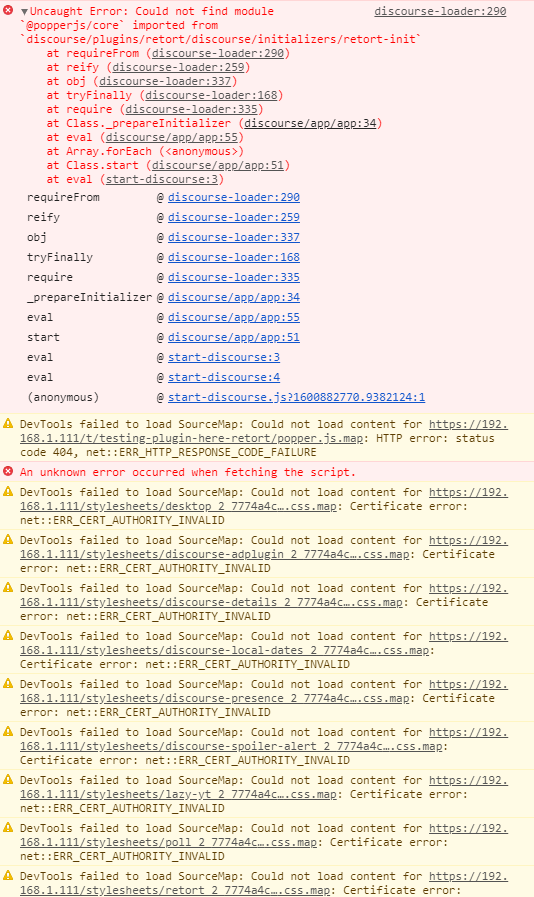 It looks like there is something wrong at “import” in my installation. I install Discourse using source code, not Docker, therefore I always put new plugins into discourse/plugins, by which I successfully installed another two plugins. I am not sure if it was the proper way to have retort installed in the same way.

By the way, I did have @popperjs/core installed using npm before, but I don’t know why I encountered this error…

That import was added as part of the emoji-picker refactor that led to this plugin being updated a little while ago (see above). It was added to Discourse about a month ago. If you’re getting that error it means you’re running an older version of Discourse. I’m guessing you’re running the stable branch.

This plugin also supports stable, via the .discourse_compatibility file, but if you’re not using Docker, you’ll need to install the plugin using the rake task plugin:pull_compatible_all which will pull the right version of the plugin for stable.

If this is a production environment, and you’re relatively new to Discourse I would strongly recommend you use Docker. It handles a number of aspects of managing a Discourse environment, like pulling the right plugin version for your environment, that could potentially trip you up.

Hi I had emoji restricted. An update awhile ago I had to allow unrestricted emojis for the plugin to work.

Thank you so much @angus, you are right I am on stable branch of discourse now. I will run rake task to pull the compatible version of retort. After I obtain domain name, I will go with Docker image for a more convenient way.

Thank you again for your kind help

In the default theme of Discourse, in the mobile view, the reply button is split from the rest of the bottom toolbar icons (like, share, etc) and it pushes the retort icon down and looks really ugly.
I am using this css added to the theme to correct the design. Perhaps you will find it useful for you too

Not expected no. I’ll take a look on the weekend.

If you need help debugging this or have a clue of what may be the issue please let me know.

Seems to be related to this line…

Thanks, I’ll take a look tomorrow.

Wow, that was quick! Thanks!

Great, I am hoping to setup this to my community too

Not expected no. I’ll take a look on the weekend.

Any luck with this? Were you able to reproduce the issue? I wonder if we are the only ones with this problem.

It’s somewhat tricky to repro, but I have seen it at least once here:

Here's something to react to

I’ve made a change that should prevent this from occuring. Could you update and test it?