This plugin enables Sign-In with Ethereum on Discourse

As an alternative, you can configure the WalletConnect instance with JSON RPC endpoints, as shown below:

Doing so will supersede the Infura ID configuration option for WalletConnect specifically, other uses of an Infura ID won’t be affected. 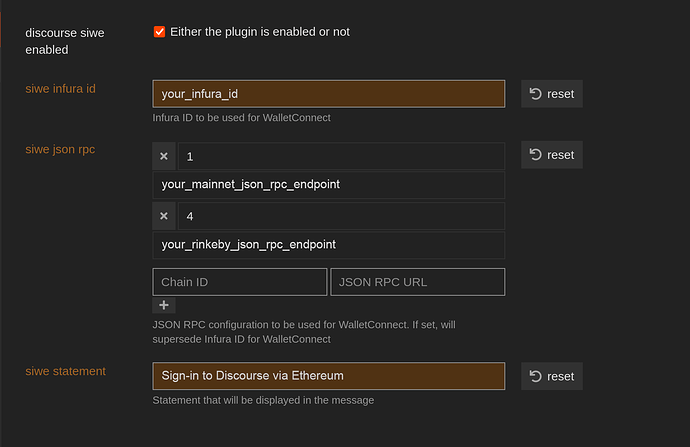 By default a statement is added to the messages: Sign-in to Discourse via Ethereum. To edit this statement access the settings (same as before) and update it.

Found this on GitHub, seems to be actively developed too. Seems like it allows web3 logins (still require email addresses after logging in with your wallet). 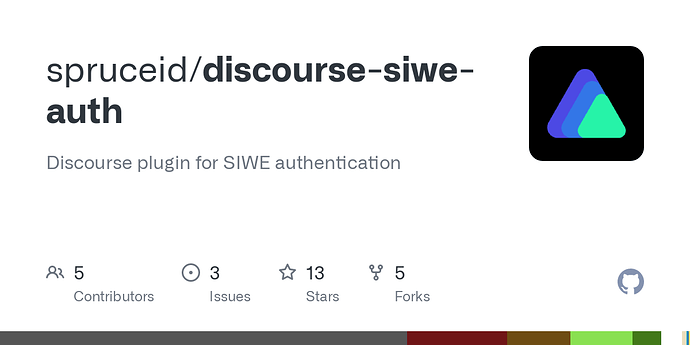 Discourse plugin for SIWE authentication. Contribute to spruceid/discourse-siwe-auth development by creating an account on GitHub.

However the dev is facing an issue that prevents installing the plugin and bootstrapping discourse after. Full details in the issue below. Maybe it’s a really simple issue and someone here can submit a PR for the dev.

Solution in the Github issue.

That is awesome, trying it right now. I hope this helps te developer aswell

EDIT: I end up with the same error it seems even tho it looks like the gem is being installed:

please scroll up and look for earlier error messages

Can you please do this?

Going through the logs, posting things that I believe might be relevant.

@moderators maybe a topic split for this? There is no official topic from this plugin, I don’t think the dev is on meta.

I don’t see any other errors at this moment (or I’m missing them, logs are long)

@moderators maybe a topic split for this? There is no official topic from this plugin, I don’t think the dev is on meta.

To be honest, I’m not following the gist of what’s going on here.

@RGJ and @michaeld have the power to split, so perhaps they’ll do the honours and manage it in a more sensitive manner than I will.

(or, alternatively, pick the post to split from, name the category you want it to go in, and let me know a title to give it

My suggestion is split from here:

The most suitable category would be #support or #plugins (i’m not sure… how do we deal with plugins that are not developed by a member of Meta… maybe he will join meta or we can invite him through github to meta someday?)

@michaeld made a PR for this yesterday, but it’s not merged yet. You can use GitHub - communiteq/discourse-siwe-auth: Discourse plugin for SIWE authentication in the meanwhile.

You can use GitHub - communiteq/discourse-siwe-auth: Discourse plugin for SIWE authentication in the meanwhile.

Can confirm this works! Thanks Michael.

So to sum it up, you need both the before_code as described in the issue Cannot Install Plugin on Self-Hosted Discourse server - rbsecp256k1 · Issue #15 · spruceid/discourse-siwe-auth · GitHub AND the newer version of the eth gem that I made the (currently unmerged) PR for.

A bit late here on the official forum, but hey - Rocco here from the Spruce team.

Thanks again @michaeld for the fixes there, it took care of it and we updated the documentation from our side. Also thanks for bringing this all up - we’re still actively developing / maintaining things around Sign-In with Ethereum.

- we love Discourse and want to figure out how to extend this functionality to instances that aren’t self-hosted.

Just for clarity, Communiteq does support this plugin on our managed hosting plans, it’s available on the Professional plan and higher.

My apologies about that!

No need to apologize! The official hosting does not have it (yet?). I just wanted to emphasize our commitment to these web3 plugins.

But definitely kudos for the support from Communiteq! Anything to help support Web3 users is really awesome.

From our end we’re working on various different ways to support Sign-In with Ethereum adoption and Discourse was always at the top of our list which is why after we standardized it EIP-4361 we created the plugin. The other thing that has been top of mind is around what else to add to it - with the custom RPC provider being one of the first pieces.

This plugin is not working for me there is some issue with plugin not able to install , can somebody share alternative or help with this one @michaeld @RGJ

some issue with plugin not able to install

You will need to share details if you want help.

@RGJ when i try to install this plugin , rebuild fails with this error