On 2.8 a very useful feature was introduced: delete merged stub topics after days.

When such stub topics are “created” following a post merge, an auto-delete timer is created:

All good so far.

However, if that timer is

edited, it doesn’t behave as one expects.

Lowering that timer doesn’t seem to have any effect on the actual auto-deletion of the topic which still follows the original delete merged stub topics after days setting: once that (visible) timer expires on the new date, the stub topic still remains. Only after the, eg, 7 days there’s an actual deletion.

There seems to be two separate timers here that don’t seem to agree. Perhaps the visible timer shouldn’t be editable? Or, if it is, the auto-delete should follow it’s new value but that doesn’t seem to be happening for some reason.

a work around could be to cancel the timer, save and then add a new timer.

can you try that ?

I tried to reproduce the issue as follows:

my topic was deleted successfully.

am I missing something or could it be that you’re on an older commit of discourse and the issue is already fixed in a more recent version?

There seems to be more to this, perhaps related with TL4 permissions.

– As an admin: I created a new topic, then moved that single post elsewhere. Went back to the stub topic, changed the 7d timer to a minute from there. After some minutes the background job marked the topic as deleted. This is the intended behavior.

– As a TL4: I repeated the same steps. But, after the (reduced) timer expired, the topic remained there (not deleted) and the timer disappears from view.

As evidence that there seems to be something amiss with auto-delete timers and TL4 accounts, I noticed this oddity: once the stub topic (reduced) auto-delete timer expires, if they go to the Set topic timer..., this shows: 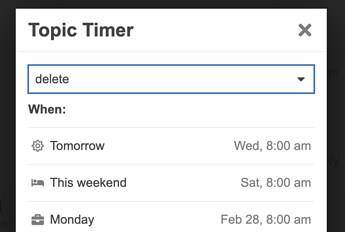 Note the deleted selected entry. But opening that dropdown, it’s not even one of the options: 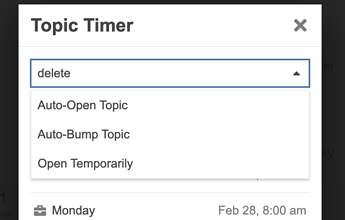 In short: the issue seems specific to TL4’s editing stub topic auto-delete timers. They seem able to edit the timer, the countdown appears to change, but the topic is not deleted on the new date.

a work around could be to cancel the timer, save and then add a new timer.

As this seems related to TL4 only (see above), they can’t create auto-delete timers (although they seem to be able to edit this one), so this workaround doesn’t apply.

Some more context to this: it’s actually not specific to stub topics and can be reproduced even on a regular topic that has a auto-delete timer set (eg: by an admin/moderator).

So: TL4’s appear to be able to edit an auto-delete timer down (probably they shouldn’t?), the countdown does change, but when the (now reduced) timer expires, the topic is not deleted and the timer disappears from view.

I can replicate this with the new TL4 information.

TL4 appear to have the ability to edit pre-existing auto-delete timers through the UI, however these changes do not take effect, and visually wipe the ‘real’ timer countdown.

I can also confirm this with TL4. Seems to be a bug. Most probably, TL4s shouldn’t be allowed to customize that timer.