Unread tab does not update after reading

Was the getting stuck only happening on your mobile phone?

This happens without whispers. It happens on desktop (Chrome) and on mobile Safari. I can provide some screen recordings if you’d like.

Doing a hard refresh doesn’t seem to fix it.

Yes, I only see this issue on my phone. More specifically, if I visited a topic on my phone and it failed to be marked read, on desktop it would also still show as unread. But I have not witnessed a post fail to be mark read after visiting it on the desktop.

Further corroboration that it’s a “write” issue not a “read” issue.

This to me sounds service worker related. My strong suspicion is that your Android somehow thinks it is offline when it in fact has network access. Does the read blue dot go away for you?

I think we must look at adding a clear and prominent indicator on the screen when the service worker thinks you are offline.

That’s what I think too.

Does the read blue dot go away for you?

Hmmm… Do you mean the blue dot on each post? I don’t see that on mobile whether things are working or not.

Maybe blue dot has regressed entirely on Android @sam? Can you verify @falco?

Nah I think we suppress it on mobile for simplicity, we can add a theme component here that reinstates it

Hey guys OP here. None of our users are using android. This happens universally across all devices I’ve tried it on. Our unread feed is not being updated.

Can you repro the issue on this site?

No I haven’t seen the issue on meta. Only on our own site hosted with you guys.

Same behavior here. I know I’ve read this post because I like a comment in first unread topic. Confirmed on meta. Still marked as unread on Android mobile. Eventually it will work, but it takes a bit. Had to open the thread several times. 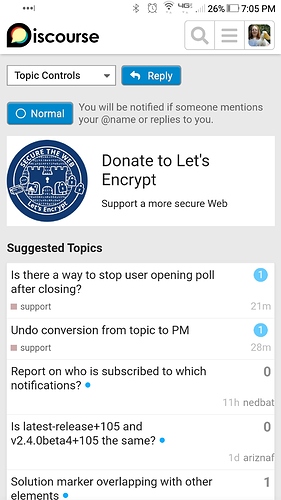 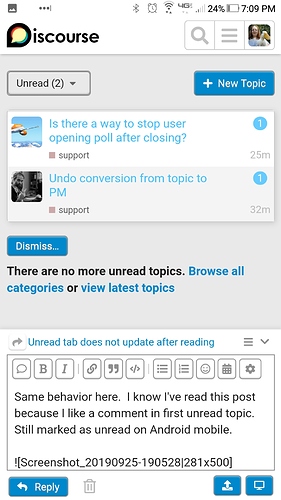 We are getting user reports of issues that sound very similar to what is reported in this thread. We have not been able to narrow it down yet, but for us the reports have been 100% from Android users (I am an iOS guy myself). More than 5 different individuals have reported this so I am starting to beleive that there is something fishy going on, but can’t help you any further at this point.

We’ll keep on tracking the issue.

I can reproduce this eventually in Chrome Android, will investigate next week.

My guess is that something broke a recent fix @david introduced in this code path.

Note @falco that we run stable here at tappara.co.

That is interesting, because stable doesn’t have the new service worker bits (offline support with workboxjs) so that kinda rules me out of breaking it

@ljpp didn’t mention that I ran into this for the first time at Tappara.co months ago. I’ve posted about this on our staff category on May. We were using 2.2 stable back then. It has been happening to me ever since, rarely. I find it weird that other users are only experiencing this on last couple of weeks.

Yes, I left it out as this issue has clearly escalated during the last couple of weeks, while we have not updated our Discourse codebase for some time. This might hint that the issue is on the Chrome side.

Also as @sam suggested, it is possible that there are actually multiple issues with similar symptoms. We have to narrow it down somehow.