It’s taken me a little while, but I’m finally ready to launch Discourse to my webcomic readers.

This was ideal because I wanted to use the ability to comment on certain pages (via Discourse) as a special perk for my Patrons, and also so I could slowly ease my (very Disqus-attached) general readership community over to Discourse.

But when I tested it today, the Discourse comments took over everything. Disqus was completely removed from the pages.

Did anything change with WP-Discourse that would change how well it plays with Disqus? Is there something I could do so it would display both Discourse comments and Disqus comments again?

Any help you could offer would be much appreciated. I was planning to flip the switch on it this week, but if the Disqus comments are completely removed, it would not be well-received.

Did anything change with WP-Discourse that would change how well it plays with Disqus? Is there something I could do so it would display both Discourse comments and Disqus comments again?

I don’t think anything has changed in the WP Discourse plugin that would affect Disqus comments. The ‘Load Comments with Ajax’ setting will prevent old WordPress comments from being displayed though. Can you go to the ‘Commenting’ settings tab of your WP Discourse options page and make sure that ‘Load Comments With Ajax’ is not enabled?

Thank you for your reply, Simon. I’ve tried it both with Ajax on and off. In both cases, only the Discourse comments show.

Here are the settings I’ve been using for testing: 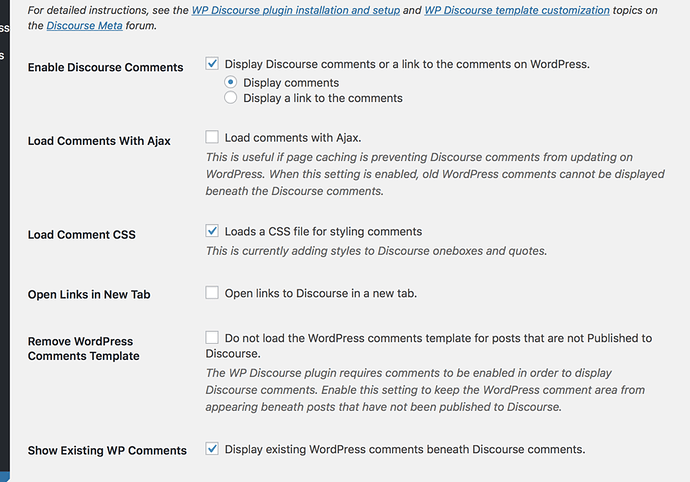 I’m leaving Enable Discourse Comments off for now since it hides my Disqus comments, but if you want me to turn it on for some limited-time testing, let me know. Just let me know how I can help.

I just wanted to give a follow-up comment here in case anyone else has a similar issue.

I took this discussion to PM with Simon, and he was super-helpful in diagnosing the issue. He advised me that

As soon as he said that, I knew we had found the problem.

Ordinarily, the Disqus plugin backs up all the Disqus comments made on your site to your WordPress Comment database. (That’s in case you ever decide to stop using Disqus—you don’t lose your readers’ comments.)

But I’ve been having intermittent problems with the Disqus plugin not syncing to my Wordpress database and, sure enough, I discovered that was what was happening here. Once I re-established the sync and Disqus added its comments to the Wordpress database, all the Disqus comments then appeared under all my pages where they hadn’t before.

And this discussion was helpful for another reason: last night I posted my first new WordPress page with WP-Discourse comments enabled. The Disqus comments box did not appear for that page.

But now I knew the fix! I immediately went to the Comments metabox for that new page, and added a dummy comment and hit Publish:

Voilà! The Disqus comment box appeared on my published page (my dummy comment did not), and my readers were able to use both systems. I’ll just remember to do that before I publish going forward.

Hopefully that will be helpful to anyone else looking to keep both systems running, however temporarily.

Have you considered migrating your disqus comments (and commenters) to Discourse?

My readers are quite attached to Disqus, so it’s more of a “let’s gently introduce them to Discourse, give them both options, and hopefully they will become as charmed with it as I am” process right now.

There would be a full revolt if I just made the swap unilaterally.

But I’m curious, are there specific tools for migrating my Disqus comments and commenters to the Discourse platform?

Thank you. If I decide to go that route, I’ll do a search for that.