Zapier or another IFTTT service

Zapier: https://zapier.com/
Integromat: Integromat - The glue of the internet

Most definitely up for having Zapier and Discourse work in hand together better than they do already via webhooks! However I think we also need Zapier to work on it too.

I think we also need Zapier to work on it too

I think that’s what the other thread I referenced is about. However, my impression is that the best way to get a zapier integration (and one that works) is by doing it yourself. Most companies seem to provide their own zapier integration. At least zapier support often tell me that they can’t fix it because the integration is maintained by whatever company it is.

Having said that, I am not sure zapier is the best service to focus on. Their integrations are pretty basic and geared towards the consumer market. Their benefit, of course, is in being the market leader. Integromat let’s you basically design your own custom integration with a lot of detail, including text processing and what not.

The question is who would this integration be aimed at. If it is admins and developers, I think something like integromat would be better. If the idea is that any forum member should be able to, I don’t know, pull all posts in a specific category over to their dropbox, then zapier might be better.

The only open source alternative seems to be bip.io but they don’t even keep their SSL certificate up to date…

Er… what? We have webhooks so this has zero to do with us, and this “integration” makes no sense?

If we are missing a webhook that could be a legit “integration” issue?

I think Zapier is working on it

Instantly connect Discourse with the apps you use everyday. Discourse integrates with 1,500 other apps on Zapier - it's the easiest way to automate your work. 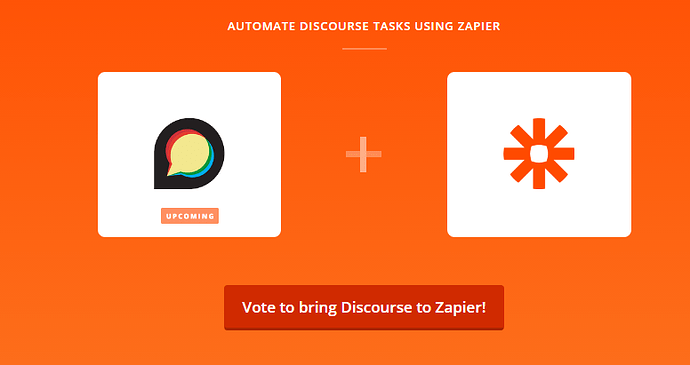 I think that doesn’t mean anything. They have that kind of “announcement” for pretty much every service…

What’s perhaps more interesting is how you can use zapier already now:

Since there’s nothing we can do on our end with this integration, I’m closing this request (also so that we can test if closing will return votes correctly @sam … edit: it appears to have worked correctly).