I have looked at several topics (e.g., 1) and I don’t see that this need has been addressed previously.

I am using some forums as direct mailing list replacements. For example, we have a mailing list that we used for some users asking all others if they would like their shifts (e.g., “Shift tomorrow for trade”). In GNU/Mailman, the correct setting would be to set “reply to sender”.

I have clearly articulated in a tutorial how I think people should use the mailing list, but it’s clear that’s not happening. People are still sending to the forum, and because all users are by default “watching”, everybody receives messages that used to be sent privately. Instead of making life better, at this point the lists have made things at best net neutral, though worse for most.

Is this already possible? If not, any thoughts on how I could make it happen? I think for my purposes, this might be a killer for our users if we can’t resolve it…

I’m not quite following. Could you describe an example scenario of things going wrong in this setup?

Alice wishes to offload her Wednesday shift from a group of colleagues in a group named @Consultants, who are all watching #Shift-Trades.

She sends a message saying:

Hi, I want to get rid of my Wednesday shift at the urgent care from 12pm to 8pm. Any takers?

Most users will receive Alice's request via email, as they are set to watch the category by default.

According to the instructions @Tarek sent, they should respond by one of:

However, most users will simply hit “reply” (not reply-all as they have been trained over time) and respond with “Sorry Alice, I can’t. Busy”. These messages should only arrive to Alice, and not the entire group.

Bob should be able to reply by default only to Alice, and should have to make an effort to reply to the whole group.

Does that make my intentions clear?

So you want to expose emails for everyone? E.g. each individual email reply literally comes from that person, and replying via email would only reply to that person?

expose emails for everyone?

That sounds not so good to me.

Maybe a way to create a new message with only the two instead of the entire group?

I’ve included the GNU/Mailman option below. Either is fine by me in this case where we all trust each other: Either the individual’s email address is directly exposed; OR it would force the reply to go to a PM to that person. Either way, it is a nuisance to most members of the list to receive the reply messages.

A super bonus: If the “Reply-To/From” were the sender, but a CC shows the replies+random@example.org such that if the user says “reply all”, they would hit the public topic/list (as expected in most mailing lists).

I’ve been looking at the source code and concluded that this feature does not as of yet exist. Are there any hints as to whether this might be considered for core development or if I’d have to try to develop it alone?

Sure, sign up for an enterprise hosting plan if you wish to fund the development and feel strongly about the feature existing. That is the fastest way.

I’d also like to see this and suggest that Reply Privately or Reply to Sender (or some such) be added to the expanded ("…") post options menu.

It already exists – the flag dialog lets you do this.

This discussion seems to be about pure email that never touches the website, though, so I’m confused what your statements have to do with the topic.

As mentioned, below is a summary of the earlier points in this topic, and new thoughts, on letting a user reply privately to a post.

Note: This would also clarify that the current “reply to this email to respond” language is not the same as replying privately (which can be confusing to users as currently implemented).

@sam previously mentioned an idea he had for handling display of users as actual email addresses in the email client for PM’s…
… it seems relevant here:

It is a slight departure from the way email works though cause you will not have a way to “just reply” to one of the people.

Thank you so much for doing this! I have a few comments that I think would improve this spec and make it resemble the mailing list features that I envision:

I propose this as making more sense: If the user hits “Reply”, then it goes ONLY to the user who sent the message. If they “Reply to All” from the mail client, then it will go to the Topic. This would behave more like normal mailing lists.

This could be via two reply+ addresses, one in Reply-To, and one in CC.

Thank you again for doing this!!

@DeanMarkTaylor since the reply would only go to one user, not sure we need to sort out the multiple users in email response issue. It would be the same approach though–recipient would be identified with a reply key for the PM.

I do think showing the parties to the message in the email is important (critical for multiple party PMs) and trying to match the online experience for PMs would be good at least for consistency purposes:

I would prefer just adding the recipients to the bottom of the email (just like the web view): 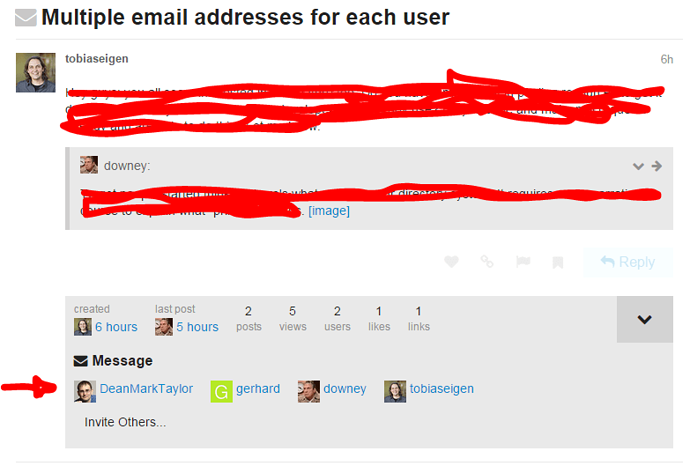 Not required for this feature since there would only be two users, but would love to fix the “show multiple parties to PM” issues.

I assumed exposing emails and the “reply” function of email clients would be the two biggest issues.

Letting any user discover the email of any other user on the system would be a big deal for a lot of communities. I understand listservs operate that way. Could be abused in lots of different ways and require additional security/privacy features. Would have to be opt-in (user account setting; defaulted to off) for existing communities and disclosed fully for new communities. If the private messaging features work via email, not sure why a user MUST HAVE the email address. It would eliminate protections like blocking users and add potential liability to community operators (email address can expose a lot of info about people). Users can choose to put that info in their profile or post.

I agree the reply-to issue is important for users. The reply-all feature of most email clients is not the default and sort of hidden many times. So we are making community users do more work to participate in the community or, even worse, users may think they are replying to the community (current Discourse default) and it just goes to the one user.

If the user hits “Reply”, then it goes ONLY to the user who sent the message. If they “Reply to All” from the mail client, then it will go to the Topic. This would behave more like normal mailing lists.

If the user hits “Reply”, then it goes to the user who sent the message [username] [replies+fasdfsdfa@example.com] AND the community [sitename] [replies+asdfasasdfa@example.com] (with the replies keys for each listed separately in the To: field. The user could delete the sitename address out of the To: field if they choose. (Would need to not send duplicate emails to the recipient if both emails remain). Alternatively, just add a setting so users can choose the reply functionality (like in your screenshot above). This would also fix the confusion about “reply to this email to respond.” I’d support that approach.

Agreed that exposing people’s email addresses is in no way a must have. I suggest it only if it makes things simpler.

For example, considering that I personally lack the programming experience, I imagine that my hack to do this will consist of introducing the “reply to” as the sending user’s email address and the “CC” as the replies+ address, such that the expected behaviour people know (reply = just the user; reply all = the whole community) would work. Yes, some issues are introduced (namely, duplicate reception of emails), but it would generally solve the need.

In that sense, I would suggest that “reply” from an email client (e.g., reply-to header) should be the SENDER and “reply all” should be the topic.

I propose this as making more sense: If the user hits “Reply”, then it goes ONLY to the user who sent the message. If they “Reply to All” from the mail client, then it will go to the Topic. This would behave more like normal mailing lists.

I like @scombs’ proposal to add a special PM button and have that open a new email dialogue. It’s not prone to user error; there are no surprises here as there could be if we’re getting involved with Reply/Reply-to-all conventions.

So perhaps it’s a philosophical choice that the different list providers make on behalf of list admins?

I’ve been playing around with the code, and arrived at this:

In line 148 of lib/email/message_builder.rb, this would result in what I would like to do:

However, now I’m trying to figure out what the ‘sender email address’ variable would be in ruby world…

After lots of support and help from others, I have finally sorted out the rawest form of how to accomplish this. It is presented below as a patch:

This patch does the following:

Note: This exposes the sender’s email address to all recipients.

Unfortunately, I will implement this patch for our use-case effective immediately.

However, I recognize that it would be amazing if the following were true:

I hope the patch as it is helps somebody. If I could make it a per-category option, would you guys consider folding it into the master branch, @erlend_sh?