Send a message to a TL0 member.

TL0 member flags that post, chooses “something else” and writes an explanation.

The flag will appear like any other custom flag.

The flag is created, but the message is not sent, and no dialogue is created. 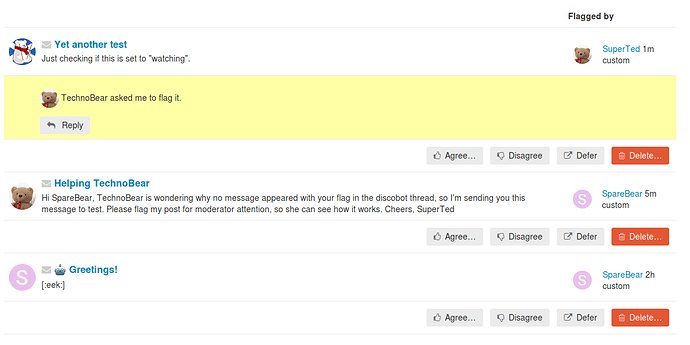 The two flags raised by SpareBear (TL0) show no message, even though one was entered, and there is no “Reply” button. The flag raised by SuperTed (TL2) functions as expected.

TL0 member is using the english language?
It’s seems there is a bug when member and forum are not both in english
https://meta.discourse.org/t/custom-message-in-flag-report/71000

Forum is English-language only, and the message was definitely in English.

@neil we should fix this

This topic was automatically closed after 2 hours. New replies are no longer allowed.

I fixed this by allowing TL0 users to send PMs to moderators.

That’s a pretty big structural change. How did this ever work before, since this is a new regression, and that loophole was not present to my knowledge since 2013?

My concern is that randos could sign up for infinite new accounts and grief the mods with no practical limit. We see it with the Korean bamwar folks, for example…

I am not 100% this did not exist forever, in the past you only got access to the flag dialog when you got to tl1and the only pm you had going was the welcome pm which was direct to moderators in many cases

I don’t recall any spam reports with the welcome PMs in the past, but I am not certain we could have had them

Oh that is right. Why are we allowing TL0 users to flag suddenly @eviltrout @neil that is the underlying issue.

I think discobot tries to teach flagging, so it was bypassed for that

They can flag private messages, which I think is a valid use case.

Yeah the idea is they can reply to any pm they get but they can’t send a pm at trust level 0. Still if we are now globally allowing tl0 flags everywhere that is not a good idea.

TL0 can only flag private messages others sent to them. They can’t flag anything else.