Can we have an aggregate View of the statistical numbers?

Like in the admin panel, I can see the post numbers everyday. You see there are many days with 0 posts. I think if we have the aggregate view, it will be better looking. 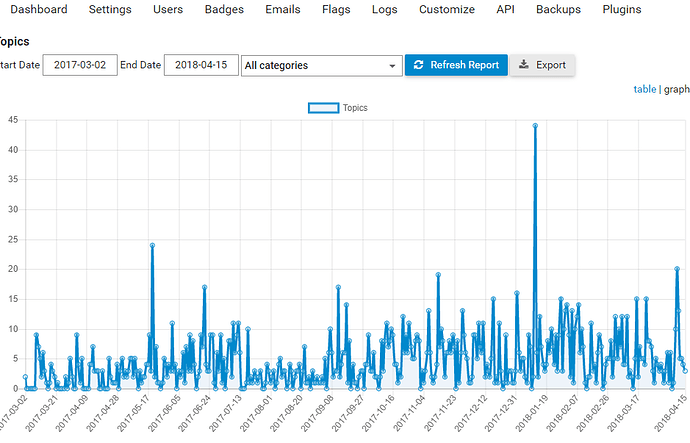 What does “aggregate” mean here? Show “Weekly/Monthly” instead of “Daily”?

Sorry, I mean the sum number, like the cumulative distribution function.

A while ago - before the nice graph images - I wrote a user script that got values from the DOM and summed and averaged the values. Averaging was a bit tricky because the script needed to factor in null key-value pairs, but finding averages should be easier now that zero values are included.

The table view still has the values in the DOM, but graph view is now an image instead of a bar graph. Although the values are no longer in the graph view DOM, script could get the JSON and work with that.

I’ve requested for something similar in the ‘what would you like to see in the dashboard topic’ (thanks for asking @Hawk). A trend line might be even more useful than what you request imho but essentially this is also very similar to what you suggest (being based on moving averages)