Cannot scroll on mobile when tapping next to topic progress indicator

I noticed recently that on mobile (iPhone 8, latest version of iOS 14 at least) sometimes I cannot scroll the page by tapping the page and moving my finger up or down. I finally figured out that this occurs specifically when tapping the topic progress indicator (blue part showing x/y posts) or to its left. It seems to only happen when at the end of the topic, not when the topic progress indicator is “floating” in the middle of the topic. But of course, when it’s fixed at the end of the topic is when it can end up located in the middle of the page and is easiest to tap the section that doesn’t allow scrolling.

Here’s an image showing the section I’m talking about. 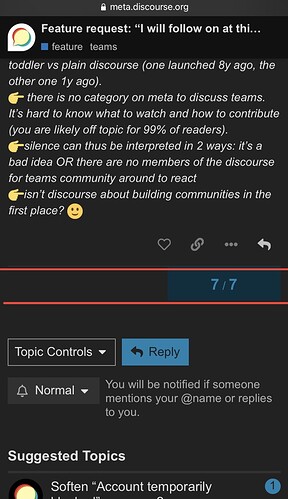 So, avoid tapping in that specific area? How does this “bug” prevent normal use of Discourse? Recategorizing.

So, avoid tapping in that specific area?

That is much easier said than done considering it often ends up in the middle of the screen when I reach the bottom of the topic.

How does this “bug” prevent normal use of Discourse?

Generally speaking, on mobile you can tap anywhere on any website or any app and drag your finger up and down to scroll. This behavior sometimes doesn’t work in Discourse, preventing normal use of standard mobile browsing behavior.

For what it’s worth, I reported this because I’d never seen it before and so I thought it was a recent degradation. I just checked a few Discourse communities I know of, and it may not be as recent as I thought. The bug is reproducible on https://community.kitsun.io, which is on commit 186379adac from November 17th. However, the bug is not reproducible on https://community.bunpro.jp, which is on commit 763f48abc7 from September 3rd. So not as recent as I thought, but introduced sometime 2-4 months ago.

I’ll try to work around it, but hopefully that commit range makes it easier to investigate if you choose to.

It’s a fine report, just not a bug by the definition of the category