We’re trying something new! Every week, we’ll be posting an interview with one of our many beloved contributors here on Meta. First up: 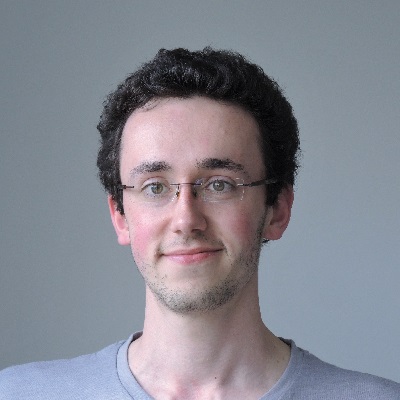 Please state your name & location, and tell us a bit about yourself

I’m Felix, and I live in south-western Germany, right about here: 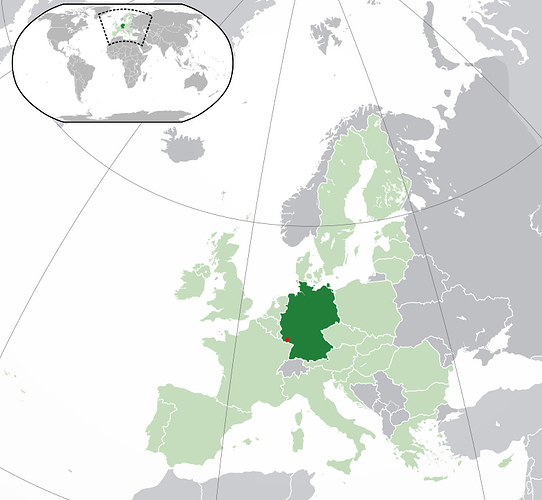 Despite hanging out way too much on Meta, I also have a regular job: I’m working on the verification of cyber-physical systems (

) as a PhD student at Saarland University. And in the rare cases when I’m not at work and have no unread posts on Meta, I mount my bike and hunt Geocaches

How did you first find out about Discourse?

As far as I remember, I basically stumbled over Discourse kind of randomly on the internet and I immediately liked it a lot. Shortly thereafter, I volunteered for a mathematics preparatory course for freshmen at our university where I was responsible for managing the course’s server. I quickly advocated for using Discourse for this course (instead of the phpBB board integrated into our course management system) and was able to convince the team. After our CMS developer had developed Discourse SSO support for our CMS and I had set up an instance, we were ready to go and had a blast

What are you using Discourse for?

In addition to being on Meta and occasionally reading the Let’s Encrypt board, I’m running two separate Discourse installs: The one for the mathematics course I mentioned earlier (which I’m now administering together with @GregoryS) and a multisite install for our chair. The multisite install hosts a few instances for projects related to our chair, but we’re mostly using it for lectures: For almost two years now, we’ve been setting up Discourse instances for all large lectures offered by our chair. (Smaller lectures with few participants still use the phpBB board integrated in our CMS.)

How did you get so involved in the Meta community?

Back when I set up my first Discourse instance (even before we had officially decided to use Discourse not just internally, but also for our students), I wanted to use a sub-folder setup, failed, and asked here on Meta. Quickly thereafter, I reported my first bug (in a topic which still is still in pristine condition, with no replies or likes at all

), helped the first customer, and fell in love with the community. 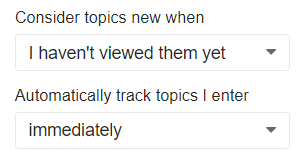 …and since then, I’ve read every new post on Meta

What compels you to contribute to Discourse?

I find that being here feels incredibly rewarding. Overall, the community is extremely helpful and friendly. When you’ve got a problem yourself (and I’ve got plenty of those

), it’s easy to quickly find help; and when you help others, this is always appreciated. It’s a positive atmosphere, and I enjoy being here

What kind of significance does the open source movement have to you?

While I’m not fundamentalist about that, I think that the open source movement is amazing and brings a lot of value to the world! I’ve released most of my own software projects as open source, and I’m pretty sure I wouldn’t be so active on Meta if Discourse weren’t open source: That would feel like working for a company for free, not like supporting a community I’m a part of.

What has been the greatest challenge in learning about Discourse and its community?

There haven’t been that many challenges, really. The biggest one I can think of is the hurdle of setting up a development environment. Ignoring two trivial PRs, I’ve never contributed any code to Discourse. That’s mostly because I don’t know my way around Ruby, but for some minor things, I would have made a PR if I had a development environment set up. The guides for settings these up aren’t bad, but they are still quite lengthy, and being on Windows doesn’t make this easier (but even if I ran Ubuntu on my laptop, I probably wouldn’t want to install all dependencies on my machine).

Maybe, setting up a development install on a standard Ubuntu instance could be automated to the point that installation becomes as easy as installing Docker?

Then, we could have a small guide that helps first-time contributors set up the environment (on Digital Ocean, so anyone could follow, but it should also work for local development, at least on Linux), and fully guide them through doing a change, testing it and creating a PR. (I’ve seen some cases here on Meta where people shied away from the last step.)

I’m not sure this will be worth the effort, but it’s an idea

Any ideas on how to improve the Meta community?

We encourage respondents to speak candidly on this topic. Even if no sensitive information was discussed, answers will always be presented in a short list.

Meta already is a nice, warm and welcoming place. You asked for ways to become even better, so there’s that

Any advice to future contributors?

Get going and come join us

Great interview. I love this idea.

Using closed also as a way to mark certain posts as “done” can be problematic.

Over my time here, I’ve sometimes run into cases where I was annoyed by a topic being closed for reason

, e.g. when I wanted to highlight that a certain part of a #feature was still open, or just wanted to express a particularly ginormous thanks for a bugfix

(It was especially frustrating when team members actually continued discussing the topic after it was closed.)

This has already gotten better since topic timers were introduced and you’ve gotten into the habit of not closing topics immediately but scheduling their closure, but I’d still prefer a separate “solved” state for topics in #bug and #feature over closing them.

Not ignoring your opinion (I personally think it has some merit), but I wanted to add that users can always flag a topic and ask for it to be reopened if they have more to say/think it’s not fully resolved. This doesn’t cover users who want to say “thanks”, but it is an option.

Wouldn’t liking the post count as “thanks” too @fefrei?

The difference is a “normal” thanks vs

a particularly ginormous thanks

Not that you couldn’t add a ginormous thanks button… 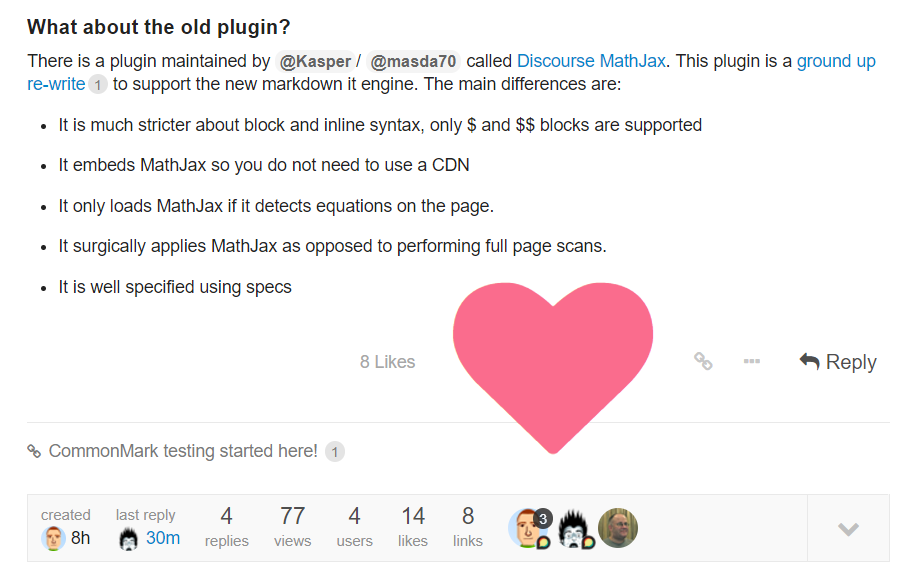 Using closed also as a way to mark certain posts as “done” can be problematic.

So I think this also ties into

Sometimes closing a topic, makes the response feel bluntly shutdown versus “solved”. However, I don’t disagree with the decision to close topics once they are solved, it reduces noise and the need for staff to tidy things up (or keep an eye) on topics that are not relevant anymore.

I agree that closing topics immediately after responding feels very “blunt”, and not very welcoming for new (or old) users.

Using the auto-close timer, even if it’s only for a few hours, makes it much ‘softer’ and still keeps noise to a minimum.

I don’t think many normal users know to flag to ask for reopening a topic. I didn’t, for example, until now.

What I’ve seen on meta is users saying, oops this topic is closed, that’s why I’ve opened an identical one. Hoe many users actually flag for reopen?

Perhaps it needs to be more prominent…

At least show up clearly as a button in closed topics? Replacing the normal reply button?

I don’t think we want it that prominent

@fefrei For some reason, I thought your profile picture was of a white haired monkey!

After looking at the larger version @codinghorror posted, all I see now is the cat, and it’s so obviously a cat. My worldview has shifted

Let’s be (even more) patient. Especially with non-native English speakers.

It’s easy to mistake language difficulties for a lack of intelligence or cogency. If this forum was in German or Chinese, I’m sure I would seem a bit dim or unfocused.

For some reason, I thought your profile picture was of a white haired monkey!

So did I until just now!

For some reason, I thought your profile picture was of a white haired monkey!

Wait, how in the world can you mistake that for a monkey?

Either way, I can assure you that it is a cat 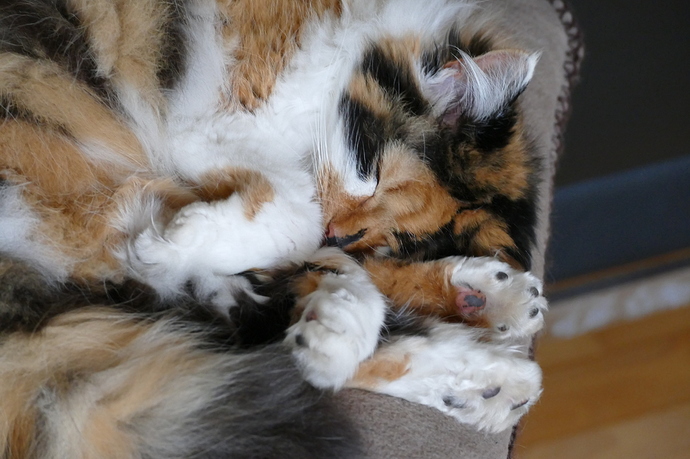 I don’t think many normal users know to flag to ask for reopening a topic. I didn’t, for example, until now.

I learned that from the occasional last post in a #bug topic that said “flag to reopen if this is still an issue”, typically by @sam. Maybe setting up a canned reply for something like this could help a bit already?

I can assure you that it is a cat

Do you need something like this? It’s already doable via admin/customize/site_texts.

Guilty here. Thought it was a mandrill.