Assuming you have a development environment set up, if you visit the http://localhost:4200/tests URL you will start running the JavaScript test suite in your browser. One fun aspect is that you can see it testing the application in a miniature window in the bottom right corner: 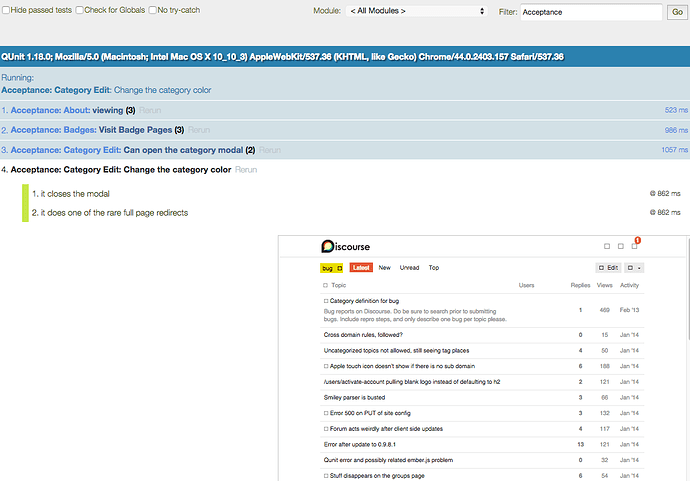 The Discourse application is built with a lot of tests that will begin running when you visit the /tests URL. So it may be helpful to filter your tests by the plugin you are working on. You can do that in the interface by clicking Plugin dropdown and selecting your plugin:

I tried to write the test in a way that is clear, but it might be a little confusing if you’ve never written an acceptance test before. I highly recommend that you read the Ember docs on acceptance testing as they have a lot of great information.

In each test we write, we need to assert something. In our test, we want to make a few assertions to check whether the tentacle is hidden initially and then shown only after clicking the button.

We want to define a set of actions to be taken before an assertion is made. To do that we use the await keyword. By using that keyword, we wait for the execution of each asynchronous helper to finish first.

Our first action of importance is: await visit("/admin/plugins/purple-tentacle");. This tells our test to navigate to that URL in our application. That URL was the one that displays the tentacle.

After visiting the page where the purple tentacle button appears, we want to check if we can see the button on the page exists and that the tentacle image doesn’t exist yet.

That is done by the following assertions:

P.S. the previous version of the purple-tentacle plugin didn’t have the #show-tentacle element id in the handlebars template. Check out the latest version to follow along!

Once those tests pass it’s time to test the interaction.

The next command is await click('#show-tentacle'); which tells our testing framework that we want to click the button and show the tentacle.

After we simulate a click on the button, we can check whether the tentacle appears by asserting:

Not too bad is it? You can try the test yourself by visiting http://localhost:4200/tests?qunit_single_plugin=purple-tentacle&qunit_skip_core=1 on your development machine. You should very quickly see the purple tentacle appear and all tests will pass.

As you write your plugins, your tests can help you identify issues in your plugin. When you’re developing your tests or if you make changes to your plugin’s code, the tests may fail. To help understand why, Ember has some nice helpers: pauseTest() and resumeTest().

To make use of them, add await pauseTest() within your test code where you would like the test to pause. Now, when you run your test in the browser, the test will automatically pause at the point you added `pauseTest(). This will give you a chance to inspect the page or view any errors to help debug for issues. 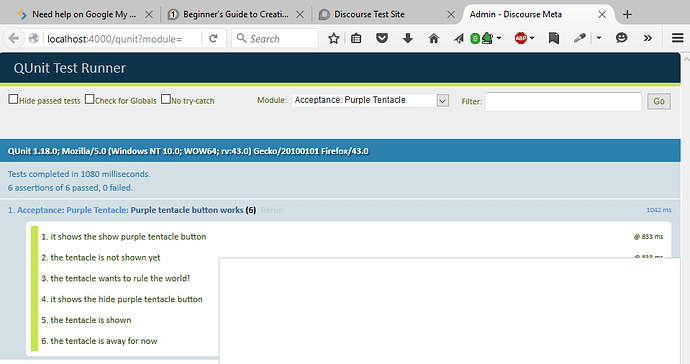