Discobot image lesson may not be working in some circumstances

The image lesson is the first lesson that asks you to do two things:

If you just reply with an image, Discobot says:

(Someone else already reported this here, but apparently it’s not reproducible – initially, I dragged the image Discobot sends you into the reply box; once I failed it once, I copied the link Discobot sends you, and both times I just got “Looks like you didn’t upload an image”, not anything about needing to like the message.)

Can you repro this @jomaxro?

Hmm how did this regress @tgxworld, maybe take a look when you are fully back

@jomaxro Can you provide me with the exact steps that you took?

I tested on both try and meta which gave me the correct behavior. 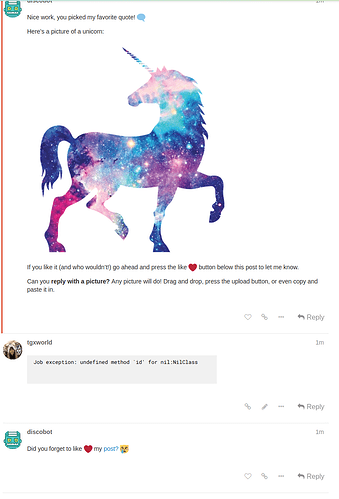 Definitely no repro on try @jomaxro … 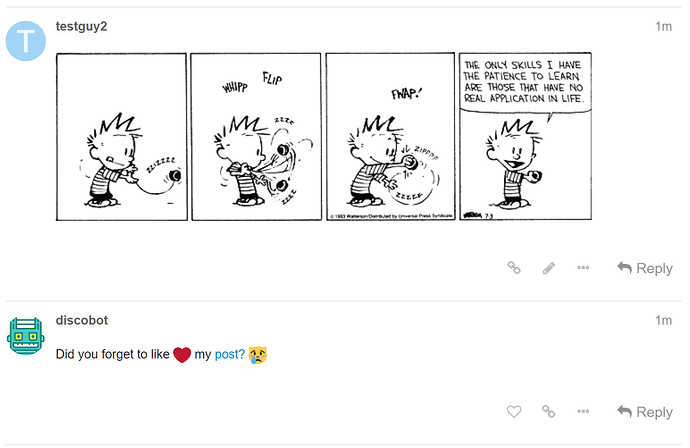 … if you are somehow getting this to happen, it is subtle. We are gonna need literal click by click and touch by touch instructions.

Interesting, my testing was on try too, so

? I’ll see if I can repro it again, and note the steps more specifically.

Repro’d it again. What I did was dragged and dropped the picture of the unicorn from discobot’s post, which caused the “you didn’t upload a picture” error.

I can confirm that uploading an image from local (I tested via drag and drop) works as expected, and I see the “did you forget to

This … this … has never been a supported behavior…

You haven’t actually added an image in that case. When we say “drag and drop” we mean drag from the desktop and drop.

Except the error text that you get implies oneboxing will work. (emphasis mine)

Looks like you didn’t upload an image so I’ve choosen a picture that I’m sure you will enjoy.

Try uploading that one next, or pasting the link in on a line by itself!

True, does that one not work? If so that’s a bigger bug.

It didn’t work after I failed with the unicorn picture. I can try again by pasting that first, before I drag and drop the unicorn. One sec…

Can confirm that pasting the link explicitly mentioned by discobot fails too. 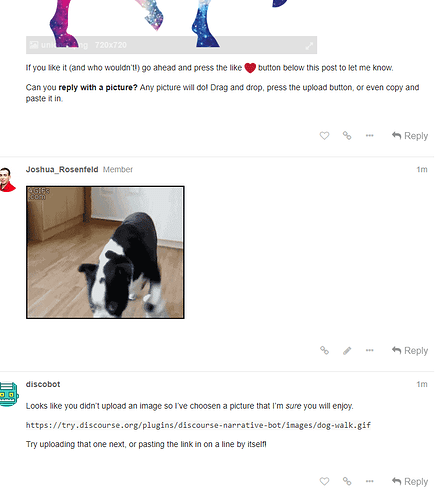 OK so looks like that’s the regression @tgxworld – it should detect that as an image.

Ahh I see what the problem is here. When a link to an image is given, it gets converted into a onebox. Any images that are present within a onebox are not counted as an image as far as our post analyzer is concerned. I guess we can be more lax with the rules for discobot such that any image tag in the cooked post is considered to be a valid image?

Sounds good to me, let’s make it so!

changed 2 files with 11 additions and 3 deletions.