Warning 1: broken depending on the version of Discourse

Warning 2: Conflict with other plugins like discourse_tagging and polls

Continuing the discussion from [Solved]: Need a developer for several Discourse projects / customization:

Thanks to Vairix, an organization specialized on Rails who have help us with this, we can now share this customizations. We needed this for our organization, Territorio creativo.

The fourth one, it’s a plugin that adds a dynamic sidebar on the right: 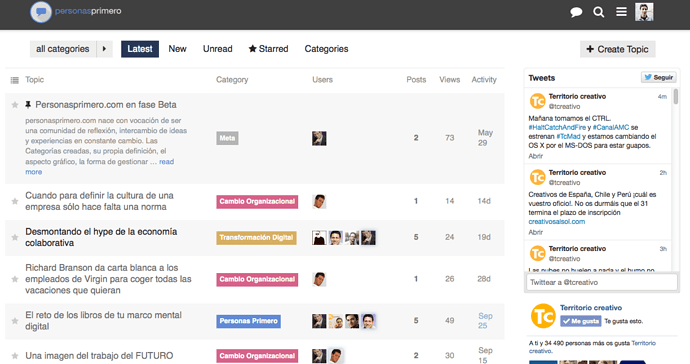 Thank you very much for putting these plugins out in the open!

Is the forum publicly accessible? It’d be nice to see these customisations live. I’m hoping the sidebar only shows on the topic indexes, seeing as it’d get in the way of the right-hand “gutter” if shown inside topics.

It seems that the forum is public: http://personasprimero.com
And it’s a very interesting D. forum, with good writing quality, critical discussions… I like it.

Twitter widget is not refreshed on the main page after the any topic view.

Isn’t it? I think that the widget shows updated tweets although the user doesn’t reload the page.

It’s on phase beta yet, but you can register if you want!

Ok! I understand the issue now, we’ll look deeper to find the problem.

Testing on my localhost it seems to work great for adding a text sidebar to the “list” pages.

Minor “bug”, on the Admin Setting page I was getting a wonky looking en.sidebar_settings menu button.

I don’t know if you wanted it to have it’s own button or be under the “plugins” button, but I think some simple config/ YAML tweaks should fix thinks up nicely.

That make sense!! If you want, send us a PR for this change. Thanks!

I would actually love to see this being put to use here on Meta.

Put up feeds from GitHub Commits and Pull Requests

Have a simple HTML menu of most frequently asked questions. Maybe even a dynamic menu of most popular How-tos.

Taking it a little further: Dynamic list of most liked features.

The noise factor does bother me a little, but I think could be mitigated by making it a toggleable menu. Might mock it up later.

Thanks for creating and publishing this plugin, I love it! Very useful for my small forum.

I’m curious, though, is there any way to modify the sidebar contents via API? If not – any idea if such a modification would be feasible? I haven’t yet played with Discourse’s API as I’m just now learning Ruby. I have some content that needs to be updated regularly and have been generating a page to embed as an iframe to accomplish this. iframes are terrible, though, and I’d really like to update the sidebar directly…

Is my only hope outside of my current solution to have it pulled by the client using Javascript?

The feature that you propose would be great, and useful for us, too.
However, at this moment we can’t dedicate time to develop this. If someone wants to make a PR, it would be welcome

By the way, we expected to see in this topic the opinion from @lightyear, that made a similar plugin.

By the way, we expected to see in this topic the opinion from @lightyear, that made a similar plugin.

Yeah. But a) I don’t know if that does work on vanilla DC at the moment (though I wouldn’t see why not), b) I recently disabled the replacing of the application template because of double overwrite problems with a third plugin and c) I haven’t had time to look at the plugin discussed here either. And I don’t want to speak up, unless I know what I am talking about

What I can say, though, is that my sidebar plugin is widget-based, which are URL-aware and can be extended by other plugins. Meaning that for example tagger provides a widget where it shows the corresponding tags for a topic or category. The widget order can be defined in the admin settings.

Thanks for this plugin. Would it be possible to use this plugin (or possibly @lightyear discourse-plugin-sidebar to run Adsense in the sidebar? I would also like to be able to add some simple static images in the sidebar.

Thanks for reporting the issue!
We will look at the changes in the code to try to resolve it (we were still using 1.2.0.beta1 on our site)

Thanks very much David for taking a look at this! Much appreciated.

Has anyone checked to see if it works with Beta4? Can’t wait until this one is resolved

I have beta4, checked. Didn’t work for me - crashed the markup and made it impossible to enter the admin interface.