Keyboard shortcut to open composer to reply to topic

The shortcut you are looking for is shift + r

And yes there’s a list, at the bottom of the hamburger menu: “Keyboard Shortcuts”

This hamburger menu? I don’t see anything for “Keyboard Shortcuts” in there. 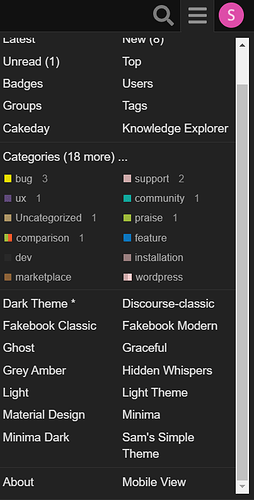 The excessive number of possible themes is pushing the menu off the screen. Can we get rid of some of these please @sam? It feels a little ridiculous to me to have so many.

This hamburger menu? I don’t see anything for “Keyboard Shortcuts” in there.

Maybe I’m missing something, but I still don’t see “Keyboard Shortcuts” here on Meta or on https://community.wanikani.com where the menu is much smaller. I’m using Chrome on Windows 10. 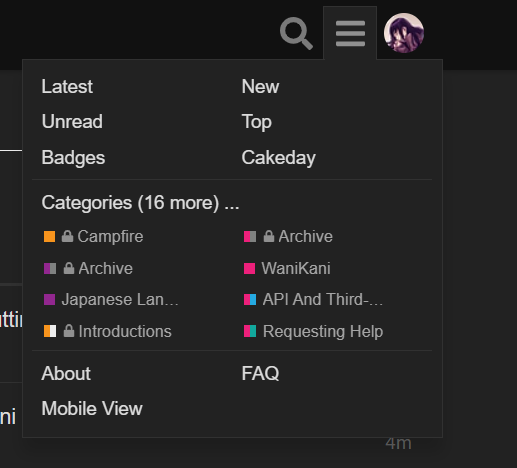 I’m not sure why that’s happening; perhaps your device / browser is being detected as a mobile device? Because mobile devices don’t have keyboards to use, thus that menu item is meaningless to them and suppressed.

What I see on meta:

What I see on my self-hosted instance:

It’s definitely showing up as the desktop view for the general layout and everything else as far as I can tell.

Can someone share a direct link to that page for the time being?

Have you tried on a different web browser or different device, or in safe mode (plugins disabled) in your browser?

AFAIK you can just press ?

Have you tried on a different web browser or different device

I just tried on a different browser and at a different resolution (plugged into monitor) with no change. I tried on a second device, and then it shows up correctly. 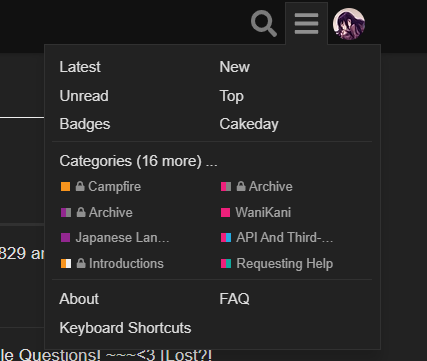 The main difference here is of course that the image from my first computer includes “Mobile View” while the second includes “Keyboard Shortcuts”. Perhaps the conditions under which you include “Mobile View” will help indicate what’s going wrong here.

When plugged into the monitor, both computers used 1440p and 100% zoom, so there’s no logical reason they would render differently. When not plugged in, the first computer was at 1080p and 125% zoom. I guess it’s possible that something about my resolution settings was cached on Discourse even after refreshing the page, such that using the monitor didn’t change anything.

Regardless, it seems to me that some aspect of the “Mobile View” / “Keyboard Shortcuts” condition is using resolution rather than user agent, or something like that. Or maybe it’s that the zoom isn’t being properly accounted for. (It seems like screen.height and screen.width in JavaScript do account for zoom, but I obviously don’t know what you’re using for screen resolution detection, if you are at all).

It’s probably worth mentioning that I have previously run into issues with the view on my laptop doing mobile-like things on Discourse, presumably due to my resolution or zoom settings.

Your laptop have touch screen support?

It does, yes. That is definitely another difference between the two laptops, as the second one (which showed the expected menu options) does not have touch screen support.

This topic was automatically closed 2 days after the last reply. New replies are no longer allowed.