I don’t think I’m on a legacy plan as the new account that was created in 2022, March 8th.

Ah, I think I missed/misread the part about registering a new account, so was under the impression the “Flex Trial” was on your two years old account.

I don’t have any downgrade option:

Hopefully that’s just while you’re on the trial. I did create my account back in September though so conceivably it may have changed for accounts created more recently than that. I’ve edited my previous post to use “probably” rather than “definitely”.

I guess it’s possible that the article I referenced is outdated and only there for existing users on that plan but that plan is no longer available to new accounts.

But it would be weird that the current plan would automatically switch to a way more expensive plan I definitively don’t need. Mailgun isn’t one of that shady companies, right?

So my guess is that “Flex Trial” would automatically switch to “Flex” when the three first months of 5000 free emails/months end… But their choice of word doesn’t seem to mean that.

I do find the wording very unclear. The pricing page uses “Try us out! Get 5,000 free emails per month for 3 months before moving to our Foundation plan” which is ambiguous, it could imply that it will automatically transition to Foundation at the end of the trial or it could be a recommendation to upgrade after it ends.

In the FAQ on the same page, for the question about testing out Mailgun, it says “For the first three months on the Trial plan, you get a complimentary 5,000 free emails per month. After your three-month trial expires, you’ll pay based on what you use.”

That seems to imply that it will move to Flex rather than Foundation at the end of the trial.

Maybe I should contact them to have a reply and no doubt.

Getting a definitive answer from Mailgun certainly seems like the way to go.

Wait a minute, where is the link for this @Bathinda

They again seem to have changed it. Now I’m seeing 5k emails free per month, as shows the below given ss: 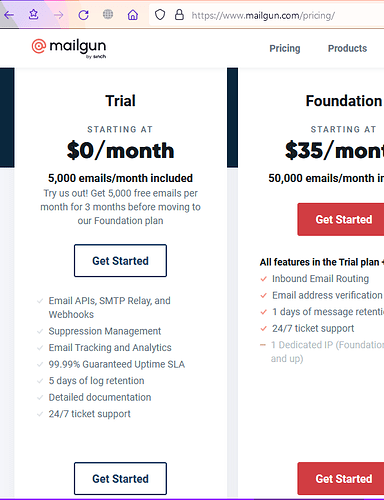 I succeeded in finding the mailgun’s mail to me (just a month ago), which mentioned free 1k emails per month (without any time limit): 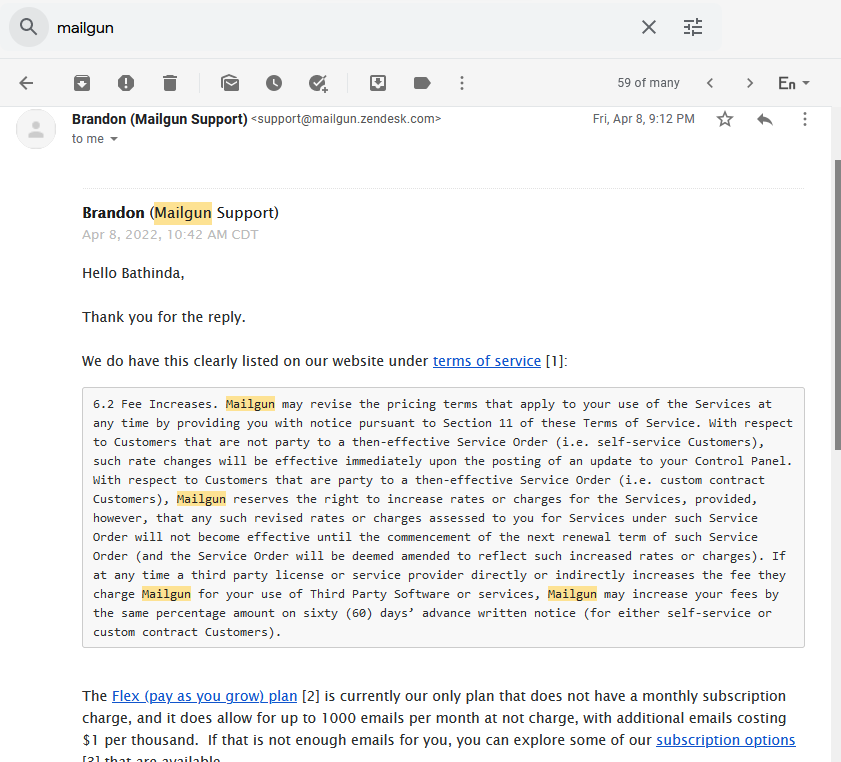 They again seem to have changed it. Now I’m seeing 5k emails free per month, as shows the below given ss:

You are confused. That is a 3 month trial only.

What we figured out in this thread is that you will not be charged if you send less than 1,000 emails per month. Once you reach 1001 emails you begin being charged $1 per 1,000 emails afterwards.

The Flex plan is still mentioned on other pages but not on their main Pricing page.

It seems as though either:

They were very aggressive (as far as persistent emails can be aggressive!) about moving from Flex to the $35pm Foundation plan when I first signed up. Maybe they weren’t successful enough in that approach and decided instead to hide or remove the Flex option. 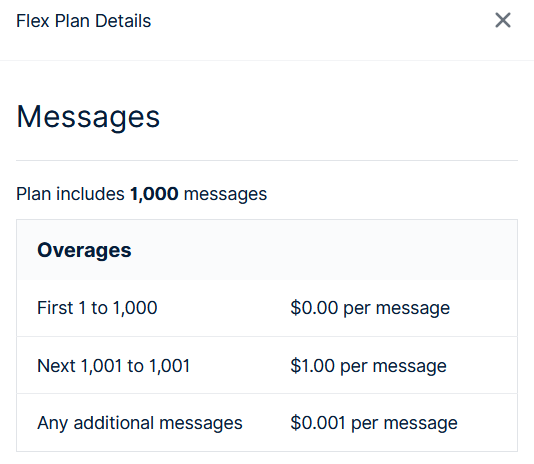 You’re going round in circles on your own there

Once you’re above the 1000 it works out as $.001 per email overall (though you could say that the very first email always works out being free!)

you will not be charged if you send less than 1,000 emails per month. Once you reach 1001 emails you begin being charged $1 per 1,000 emails afterwards.

That’s what I meant in both of my msgs here above. Excuse me if I sounded something else.

Anyway, this is the latest proof (my invoice) that Mailgun IS offering first 1000 mails free: 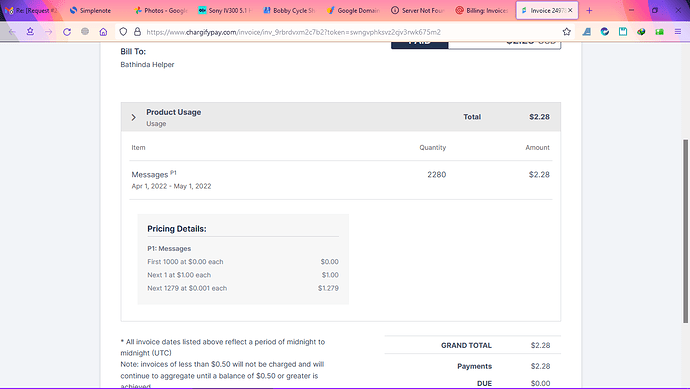 I edited the OP to add a link to the FLEX/PAYG pricing and that it seems to be impossible to pay if you live in India. I think that it’s safe for the rest of this discussion to be deleted before much longer.