we noticed that two additional requirements were added for users to get into trust level 3, a value for silenced (total) and a value for blocked (total).
But unlike the other requirements there is no way to edit these values for tl3 under admin/site_settings/category/trust
Can these be edited somewhere else?
I have not yet seen any announcement about this change. Or have I only missed it?

We are currently on v2.0.0.beta7 +66
Due to this new requirements one of our users now lost tl3 which the person had in the past.
Of course I could manually set the person back to tl3 but I would first like to know about this change and the reason behind it. 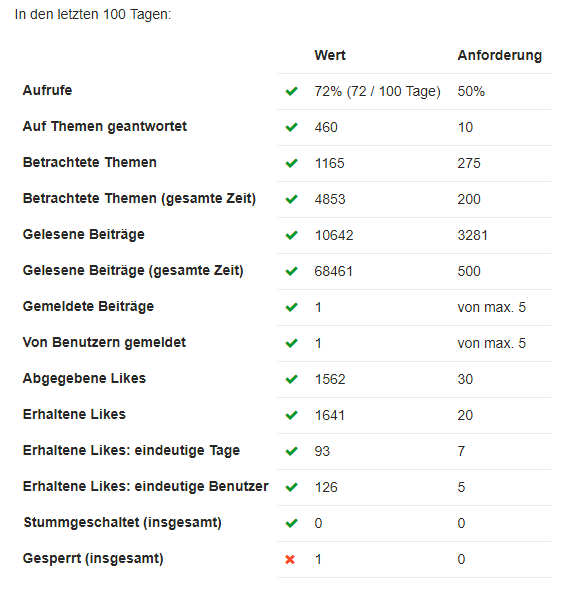 Discourse likes to err on the side of safety in its defaults, and we felt this was the safer default.

Sounds reasonable. But is it editable?

Yes I am interested in it being editable or not

same here, I would also like to have both values to be editable

In the near term manually set whoever you want to trust level 3.

This will do, but I still wonder why you don’t want to allow an admin to disable these new TL3 criteria. At least we would like to. If we are worried and we don’t want someone to reach TL3 ever again, we lock them to TL2.

You do understand that this is a massive change in the UX? The 100 day limit has served us well. Some users have even improved their ways, knowing that they can reach the higher levels with appropriate behavior (we have certain discussions restricted for TL3+).

If I’m understanding, it is not the 100 days that has changed. It is the “once a member has been Suspended no matter for how long a time, (eg. a temporary 2 week cool off) they can never reach Trust Level 3” that has been changed to only consider suspensions that are in effect during the 100 days.

In other words, it was kind of like a childhood misdemeanor going on permanent record into late adulthood.

Nope, it’s the other way around. With the new policy you can never reach TL3 if you are silenced or suspended even once.

(Earlier silencing or suspending didn’t affect at all:)

(Earlier silencing or suspending didn’t affect at all:)

I actually thought that suspension does count (with the expiration over time), but apparently we have always suspended after flagging(?). So this hardcoded requirement is totally new, on top of everything else was in place before.

As a workaround to calm down revolting users, it would be very useful if someone mad skillz could drop a line of code to mass reset everyone’s suspension/mute count to zero.

This way the users at least would have a fair chance to behave and earn their ranks from now on.