Notify users by email when "account temporarily on hold" is removed

That’s normal, if the user is active on the site an email for the PM won’t be sent. This is not a bug.

The user was not on the site since his account was automatically holded, see the screenshot: 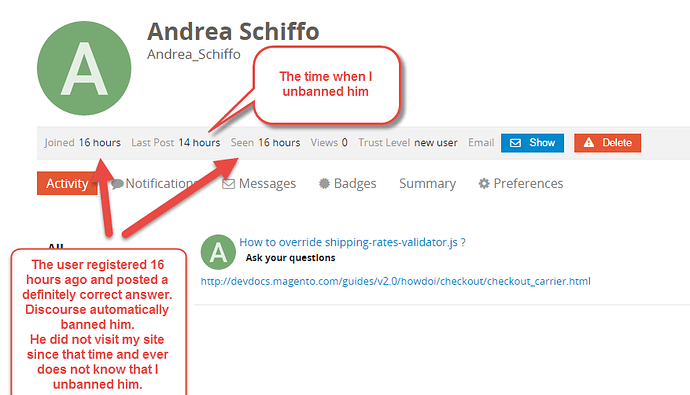 If you manually unblock a user no notification is sent, this has never been the case.

I did not manually unblock him, I just approved his post.

I think this is a feature request for “closing the loop” when a post is approved.

As it stands there is no notification when a post is finally approved, I think it would be fine to optionally email users that the first post they ever made on a forum finally got approved.

Being on the other end on the react forum and not knowing my rather excellent post was approved really did suck.

In this special case, it would make a lot of sense to send a reply to the private message that notified the user about the block

Yes… but… I don’t think they get an email to notify them of the block, they are just blocked.

They get the PM, it follows the same notification semantics as any other PM in Discourse. And when unblocked you do get another PM. I will test this later.

why not? sounds fair enough.

Here is what this looks like when an account is automatically put on hold, then unhold-ed by a moderator

As you can see the user gets a PM, whether they get emailed or not is down to settings.

The title no longer reflects the actual scenario in the first post so I will edit it.

I definitely did not not get any email when my post was eventually approved on https://discuss.reactjs.org/

I posted something, it said “pending approval” and then I had to remember to revisit to figure out if it made it on to the site on not.

My account was never placed on hold. I guess though that this is a different issue here being described. Also with “fast typing check” I am not sure if we send an email, stuff simply goes to the approval queue and account is blocked.

It is indeed a different scenario. That was approval required this is dynamic blocking.

Another case: https://mage2.pro/t/1741
A newcomer gave a definitely correct answer on a question which nobody else had answered for 9 months.
Discourse has banned him (?!?) and notified him about the ban (“account temporarily on hold”).
But Discourse does not consider to notify him:

So, the newcomer has spent his time, has given a true answer on a hard question and has got a ban as a sole response without no future notifications. 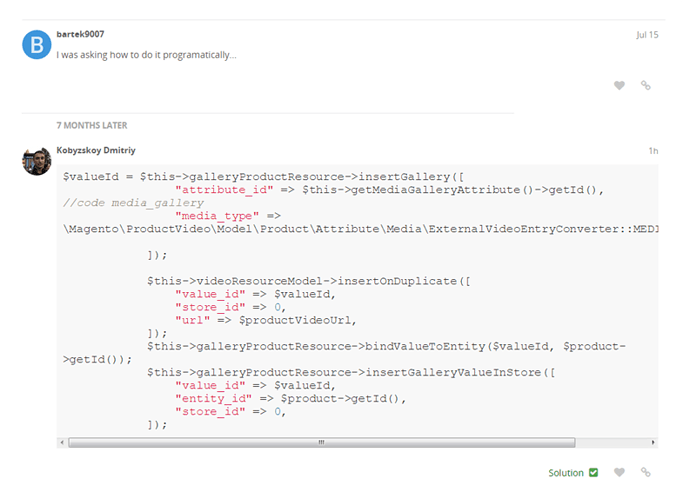 Users do get a PM when they are unblocked by staff, so your statements are incorrect. Check for yourself and see.

I have checked the sent emails log, and this user has not been notified about unblocking:

All is the same as I have already described in the first post.

Maybe the user was online at that time? Did you check his PMs for the notification?

Yes, I have checked his PM now, and there is no any message about unblocking there: 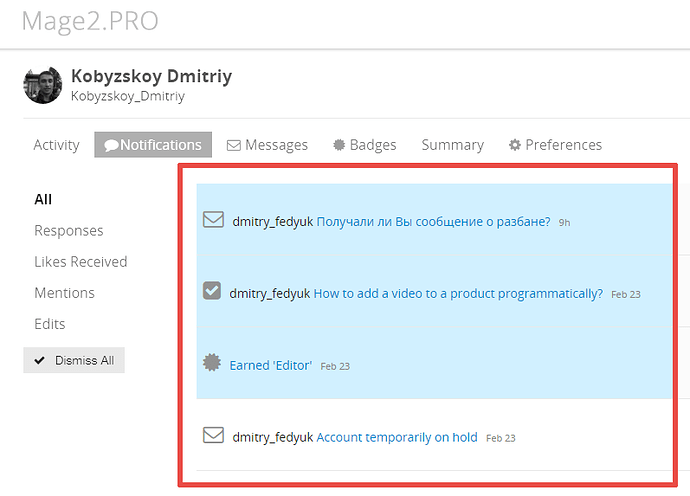