Opened the forum doors at midnight

We did a countdown with the New Years ball dropping. People cheered when it happened. It was a whole thing.

Anyway, we opened the doors at midnight and, so far, the feedback from the new community has been spectacular.

My old parent company closed the doors on us mid December (terminated the team, turned off logins & made the forum static state), so we are starting fresh with Discourse. We’ve been SMF since 2003, so I figured there would be an enormous learning curve for a chunk of the population. Good ole discobot has been helping people tremendously, though. And our community niche (DIY & crafting) naturally loves badges and gold stars, so that’s a plus, too.

Here’s to another decade+. Thanks for all things Discourse. Couldn’t have done it without you. 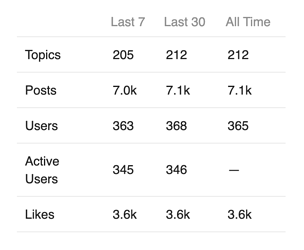 company closed the doors on us mid December (terminated the team, turned off logins & made the forum static state), so we are starting fresh with Discourse.

A company did that to the forum we were on, but “retired” the forum this past June. They also tried to turn the forum to a static state, but someone must have terminated the AWS and suddenly the forum doesn’t load.

That’s a shame because there was a lot of educational material on it. Some of us started a new forum before that one shut down, and we got the new one up and running a few weeks before the demise of the old one. Both use(d) Discourse so we were lucky everyone knew all - well, most - of the ins and outs of the software. Some of us were/are members of other forums using a different platform, but Discourse is definitely the best!

Glad to hear your new forum is doing great. And nice Active User to User numbers too!

Not a bad choice

Wow, that is so unfortunate about your old forum.

And thank you so much. So pleased I found Discourse.