Kind of a small issue, but I just noticed that the post number on the post doesn’t agree with the post number on the right side scroll slider. In the example below, I’m looking at the last post in the thread. The disagreement appears to be due to hidden posts, but shows this way for regular users. Should one or the other be adjusted to take hidden posts into account that regular users have no idea even exist? 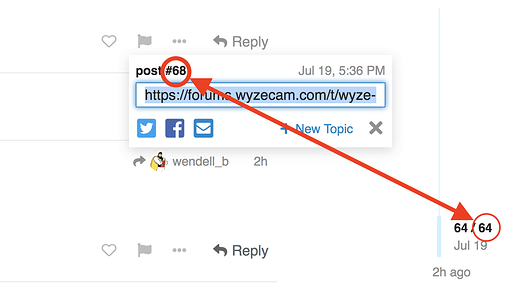 This is actually correct. One is the absolute post number, the other is the relative post count in the live topic.

Maybe I’m not being clear. It doesn’t make sense (to the average user) that there are a total of 64 posts in the thread, but the one they’re looking at is #68. We know it’s because there are hidden posts. But because they have no clue about the hidden posts, it is confusing them.

So what would you propose?

Right, but like user ID numbers, or topic ID numbers, it is what it is – a unique numeric identifier for each post.

At SitePoint we do it mainly for different reasons, but it is easy to display the post id number near posts:

It is hard to say if this is what you are looking for, but it should get you close. https://github.com/sitepoint/discourse-theme/blob/b4b4a7218ffbbfd4ee3cf8aa7421d29c96fdc4ed/assets/stylesheets/desktop/topic-post.scss#L45-L51 We use that CSS to put #1, #2, et al on a topic after the date/timestamp.

Okay, I understand the post # is not just a reference, it is used as the ID for the post. Therefore, the hidden posts need to keep their numbers in the sequence.

If we can consider it a just a display issue, I can think of two ways to fix it:

All that said, I understand that both of these might be difficult to implement in the CSS. Given that only one of our users has noticed this, if it’s difficult to change, it’s not a high priority for me personally.

, it’s not a high priority for me personally.

I suspect that you are good company.

Okay, then my solution #2 could be restated: “In the timeline scroller, display the Nth post number, including invisible posts in N.”

This will not be happening.