This allows notifications to be sent over Pushover, which grants push-notification support for iOS, through the 3rd party app.

Once installed, you will need an Application API token. Create a New Application and fill out the form.

After you created the application, copy the resulting API token to the Discourse admin plugin pages, and enable the plguin.

All users will then be able to add their User keys in their preference → Notifications.

There will be an immediate pushover message confirming the subscription. 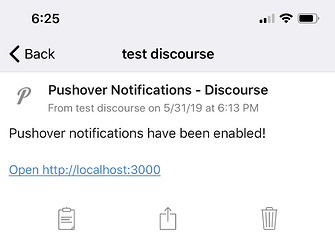 Is this for real time notification on the phone when the site is not hosted by Discourse? Or is it for other purposes?

You got it; that’s pretty much it. Desktop and Android both have notification support natively; this is a way for self-hosters to get a notifications on iOS.

Thanks for this! Aside from the one time in-app purchase for each user, what are the pros and cons of using this vs. DiscourseHub?

It’s probably less set up involved if users already are using Pushover (there have been a few requests for this already) - Pushover also allows you to customize which devices get notified. If you’re already in the ecosystem (as I have waded in), it gives an option for you to continue down that path.

On the downsides aside from in app purchases, this plugin isn’t going to be offered by any of DIscourse’s current hosting, so continued support here is really on my own time. You are also dependent on the discourse instance installing the plugin, whereas Hub can be used for any site, regardless of plugins.

DiscourseHub has separate concerns in addition to notifications - namely it allows you to aggregate activity of sites all in a single place. This plugin is just concerned with delivering notifications.

I built this mainly because I missed built in push notifications while moving to iOS, and had started using Pushover in other contexts (IRC, and long-running command line prompts), so it felt natural to start experimenting sending Discourse notifications to Pushover as well.

Is this still an active plugin? I have it installed, added the API key from Pushover, though I cannot see any place in /u/waffleslop/preferences/notifications to add a user key.

Just been more behind-the-scenes lately. Been a bit since I dug into this particular plugin, but let me see what I can find out.

@waffleslop I can confirm that this plugin still works. Have you enabled the plugin and saved your application API key?

It won’t appear unless the plugin is enabled. A user will need to refresh the page to get it to show up after that.

After that, you will see the following in messages:

The plugin works for me. All is well.