I am running a course on Discourse, and all of my students are suddenly complaining that there is a 'Reply Limit" imposed upon them. I have never had this before? I changed all of their statuses to ‘member’ thinking that was the issue, and then went to Settings/Postings/NewUserMaxRepliesPerTopic and changed it to 100 but they are still having problems.

Are they running up against any of the rate limits or consecutive posts limit?

I changed the Rate Limits so I don’t think that’s the problem.

I couldn’t find this one in admin?

You can search for the term consecutive in the Admin to find it. 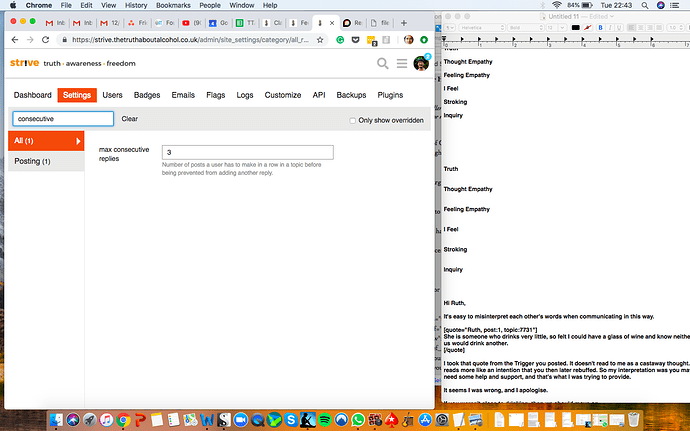 Is this it, Omar?

If so, what does it mean?

Well, the definition of the word “consecutive” might help:

synonyms: successive, succeeding, following, in succession, running, in a row, one after the other, back-to-back, continuous, straight, uninterrupted

So if someone adds that many replies in a row to a topic (aka consecutively), they will be prevented from adding even more replies until someone else replies.

In other words, this is (generally) a bad pattern for discussions:

You can trust that I know what the word ‘consecutive’ means, Jeff.

I didn’t view the word ‘row’ in that context. I was thinking in terms of ‘rows’ as in the platform.

Thanks for clearing this up.

I will extend it.

I was thinking in terms of ‘rows’ as in the platform.

What does that mean?

Well, the definition of the word “platform” might help:

So the underlying platform for Discourse is made up of Linux running under Docker, Ruby on Rails, Redis, PostgreSQL, and a few other things that I can’t immediately think of. The word “row” is a term of art for SQL-esque databases, so, presumably, that’s a setting for configuring how many replies get stuffed into a single database row.

I’m still unclear what one could be confused about, is “consecutive posts” and “posts a user has to make in a row” not understandable?

We can replace it with one or more synonyms if that helps people understand:

synonyms: successive, succeeding, following, in succession, running, in a row, one after the other, back-to-back, continuous, straight, uninterrupted

Actually, that might make it worse. Under the rule against surplusage, anyone reading that list is going to try to come up with a definition under which all of the given “synonyms” actually mean something different.

If you really want me to try to write a description, though…

Number of posts a user can make to the same topic, without giving anyone else a chance to reply, before being prevented from posting again.

But I’m not sure if that’s better or worse.

I would remove ‘in a row’ and replace it with ‘consecutively’.

I can’t speak for Jeff, but I can say that reading this thread it doesn’t come across that he’s trying to mock or belittle.

As terms go, here in the UK ‘in a row’ is a much more commonly used term than consecutively. It’s used in all kinds of fields; we talk about seats in a row, days in a row, personally I would expect more people to know and use that term than to ever reach for consecutive. Both terms appear on the setting, so hopefully people will be able to grasp at least one of them - there aren’t many good alternatives, lest we be reduced to referring to successive or ensuing responses.

Either way, it appears as though you have your solution.

without giving anyone else a chance to reply

That’s fairly misleading, particularly when there’s no measure of time involved in that setting. Consecutive posts aren’t a rate limit - the setting exists to encourage people to think out their responses and minimise excessive thread bumps. As pointed out earlier the majority of communities don’t encourage such behavior, which is why the default is 3 but it can be overridden if needed.

Not at all, I’m curious how any other interpretation of “consecutive replies” is possible. So you think changing:

is the way to go? I was thinking having a synonym in there might be better than repeating the word “consecutive” again?

is the way to go? I was thinking having a synonym in there might be better than repeating the word “consecutive” again?

“successive” I guess does not work cause brain reads “success” but “continuous” kind of works imo if we want to avoid consecutive, however it is somewhat open to interpretation.

Continuous doesn’t really mean in a streak though, does it?

I guess we can wait for now and see if others find the language confusing here as well. I am big on improving copy to make sure things are as understandable as possible by the widest possible audience.

Edit: Going to use the no bump plugin, it’s more strict than limiting consecutive replies though: Discourse-no-bump: prevent users from bumping topics

Is the ‘max consecutive replies’ setting meant to apply to users own topics also?

It does not. If you created the topic you can reply as many times in a row to your topic as you like. Topic owners are immune to this restriction.

How do flagged/hidden replie work into this situation?

If I user makes 3 consecutive replies, but before a new reply from anybody comes in, one of the 3 replies is flagged and hidden, can that user reply a 4th time?