I recommend holding off till the end of the week, I am in the midst of unifying the 2 places we render topic lists.

is there a way to offer the users one or several designs they could choose in their preferences? Planned feature? Plugin material? Far out?

probably “ninja-super-secret” material, will not be built into the UI for quite a while. so nice ui for it will be plugin material. 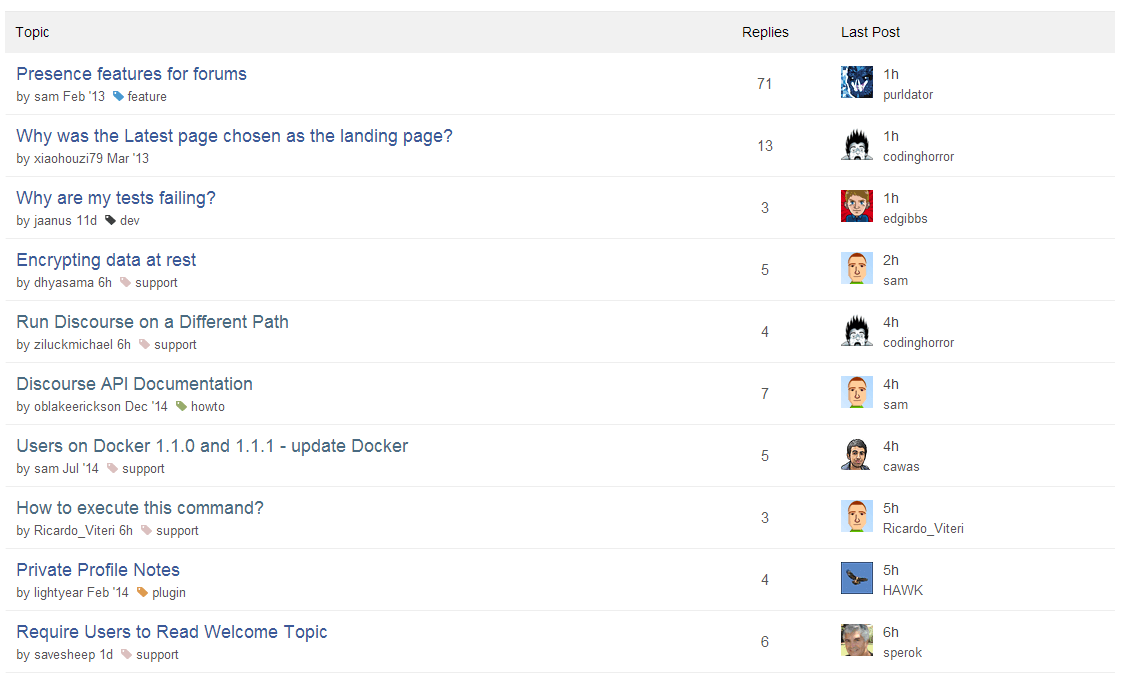 In particular we now have the last poster avatar and a deemphasized category style.

I am quite liking this category style, I don’t feel it gets in the way too much

I like it, but I still find the line of text underneath the title distracting. It makes it harder for me to parse the list of topics titles.

I get that you didn’t like removing them completely as I’d suggested earlier, but that said, we don’t even have the created time in the list today… do you really find that problematic?

Also, the categories were easier for me to scan when they were in their own column, though I do like the de-emphasized colors.

Honestly the only way to tweak these kind of things is live with them.

I added a super secret param so you can stick a site customisation, so for example:
https://meta.discourse.org/?preview-style=589a2b8f-237f-4408-b86b-2d5f158b22b6&sticky=true makes my theme sticky for me, so I can live with it for a bit and see how it goes.

To disable either delete cookies or simply go to https://meta.discourse.org/?preview-style=

Remember, this is mostly just Sam playing with his topic list customization support which also made topic lists 2x faster along the way!

The whole issue of “2 rows per topic” vs “1 row per topic” layouts is a preference in itself. But I agree, if we decided topic start date is not important enough to show at all in the 1 row layout, then I doubt it should appear in a 2 row layout, either.

Although I have no particular plans, I think this is a lot like what I would want my topic lists to look like once I get around to really customizing them.

I would probably use a bit stronger colours myself, as in darker. I also second reply count number being a point bigger and suggest that you try to scale avatars just enough to fill the row vertically, or scale everything else down accordingly.

I’m wondering about the latest post - once i have scrolled this page down enough not to see the column headers, I somehow think that the avatars and nicknames are in fact starters’

edit: once I clicked the image to 100% zoom, I’d probably shrink the overall font size one point and cut down the padding/margins by a couple of pixels.

edit2: I really would like to eventually see this sort of minimal layout as a selectable alternative to the default layout. well good mate.

@sam: very cool stuff with the sticky parameter, thanks!

Another stupid question: where can I find the original templates? I was poking around if I can find the original list/topic_list_item (e.g.), but my grep skills failed miserably… can you point me in the right direction? I wanted to make some more subtle adjustments, but for those, I need the original handlebar codes…

Also agree on separating the date from usernames… dates could be a lighter grey, or the date can be separated by a comma or something simple

How sticky should this be? Looks like it works only till the end of the session.

An interesting observation regarding, “I have this issue in theory vs in practice”

Its one of those issues that in practice is critical, but in “theoretical” reviews is often missed.

@sam, for your consideration: 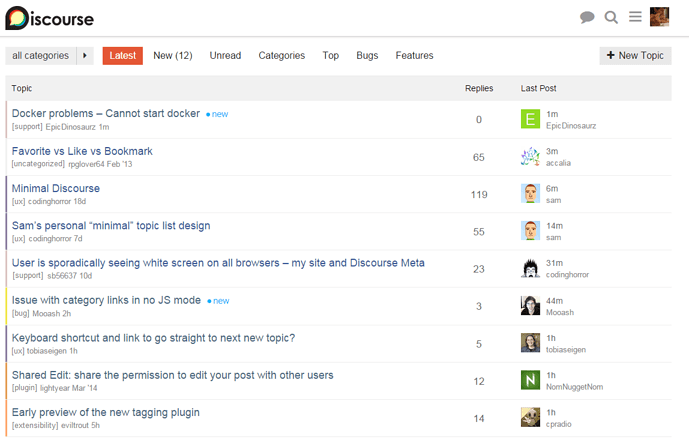 I like the changes overall, and am trying it on my install to see how it goes.

It breaks the categories view as well as affects the suggested topics module.

Is this the issue where for some threads it shows the wrong avatar? Because I have that currently, but don’t see any updates to the code in the first post.

The suggested topics change is by-design, but the categories do look quite bad, will get that fixed.

Sorry, will sync the code up shortly.

I see you’re setting up some stuff for likes columns?

One thing I noticed and which I had to fix to get working was this:

nope, not really, you need to be running latest for this to work, I just cut-and-paste this from our customization section.

I love the direction this is headed. Very clean. At the risk of appearing more “social” - Have you considered adding optional topic excerpts and/or image thumbnails? A nice responsive design that takes advantage of screen width … 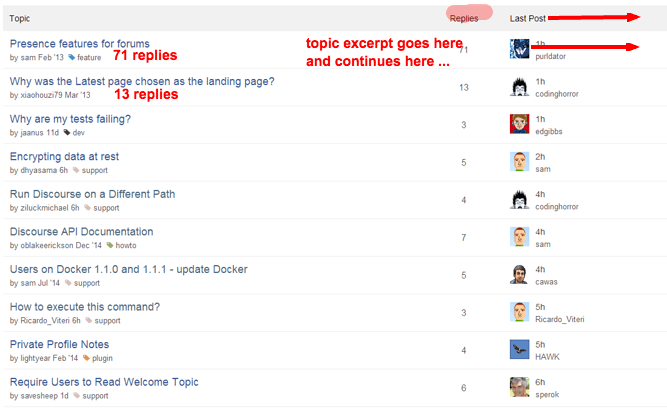 [/quote]I love that colored bar. I hope it gets adopted.